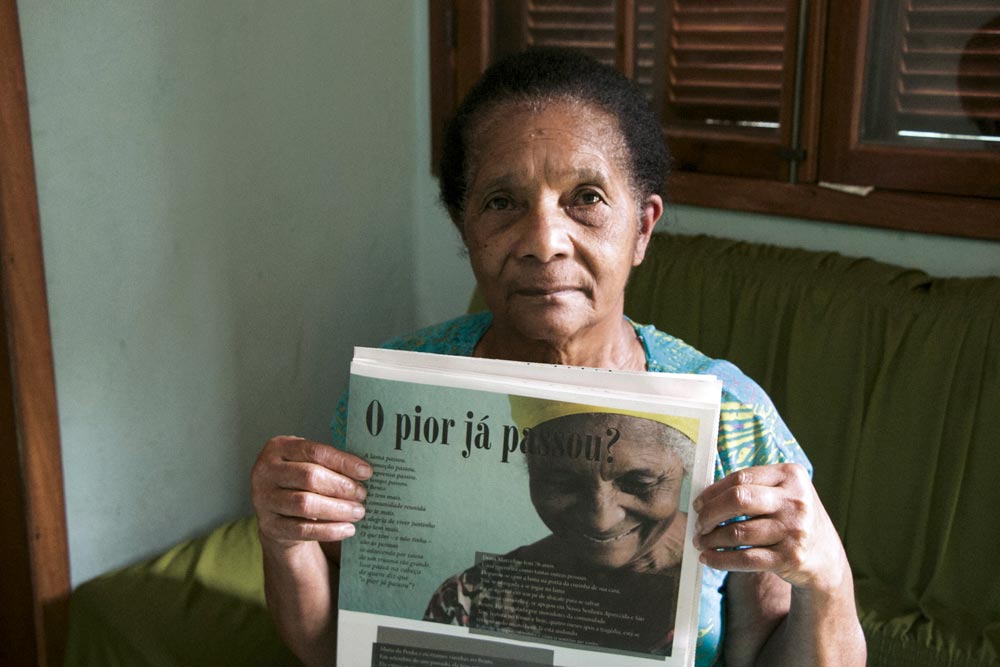 Marcelina Xavier, who had to hold on to an avocado tree to save her life, holds a copy of A Sirene. Image: Daniela Felix/Jornal A Sirene, used with Permission

It was November 5, 2015, a Sunday afternoon, when 76-year-old Marcelina Xavier found herself holding on to an avocado tree, trying to save her life as tons of mining waste swept her village of Bento Rodrigues away. With her femur broken, she has prayed until rescue came. Marcelina was in the eye of the worst environmental disaster in Brazil’s history.

On that day, an iron ore tailings dam located just a few kilometers upriver from Marcelina's community burst. In a matter of minutes, 50 million tons of waste were dumped into the Rio Doce (Sweet River), which bathes 230 cities in two states. That's equivalent to “20,000 Olympic swimming pools of toxic mud waste contaminating the soil, rivers and water systems of an area covering over 850 kilometers”, according to a report by the United Nations. Nineteen people have died in the disaster.

Marcelina’s story was told in the first edition of A Sirene (The Siren), a monthly newspaper run by a group of people affected by the tragedy together with journalism students. The publication was founded three months after the disaster and reports on related developments, such as stages of lawsuits, and survivors’ stories. It's released every 5th day of the month, to mark the date of the tragedy. Its slogan is “so we don't forget.” 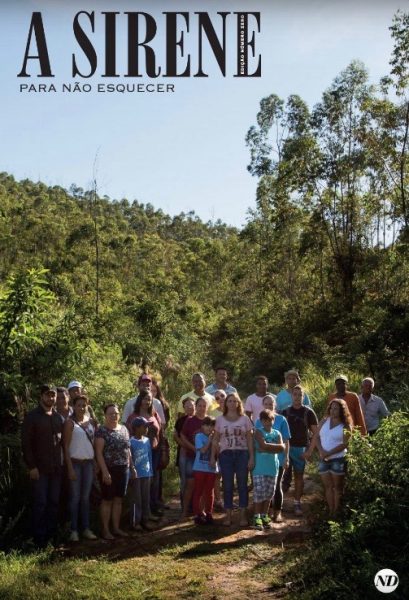 The cover of A Sirene's first edition. Image: A Sirene, used with permission

The initiative was born out of a workshop with a local photo agency, where survivors raised concerns about the way Brazil's mainstream media was telling their stories. In an interview via email with Global Voices, Sirene's team said that the events of that November 5 revealed how unprepared journalists could be when covering big mining catastrophes:

Although we see an effort by the mainstream media to publicize what happened (and still happens) in Mariana (and other affected cities in Minas Gerais and Espirito Santo), the way it tries to represent both sides of the story is insufficient. First, because there is a clear inequity between the people affected and the mining companies regarding the amount of space each of them receives. It's as if mainstream media, by following this impartiality system, reinforces an advantage that the mining companies already have. Second, because the media arrives at the scene with a pre-determined story and rarely changes its angle to match what actually matters to the people affected, their goals, their ideals, their struggles. The distance, sometimes, and the urgency of the media, as we know well, end up trampling essential journalism processes, such as listening to the people involved, for example.

Their reporting ranges from stories of the uprooted trees to how a London-based law firm is suing BHP Billiton, one of the parent companies of the dam's operator Samarco. They also run explainers of legal terms as well as personal profiles — like that of Geralda Bartolomeu, a 97-year-old survivor.

One bold innovation introduced by the publication is its by-lines, which are shared by both reporters and sources. Sources always approve content before a piece is published. Overall, the paper doesn’t intend to be a neutral medium. Another example of this is how the disaster is always called “a crime.”

As they have told Global Voices, one of the publication's most significant achievements is keeping a public record of the communities’ struggle to secure their rights and full reparation for the damages:

It is possible, by looking at the paper’s archive, to understand the main events of the peoples’ journey, in particular, of the residents of [the cities of] Mariana and Barra Longa. Although in an insufficient manner, since this is an independent and low-budget outlet, we provide an important snapshot of moments of both pain and joy which these people have experienced. 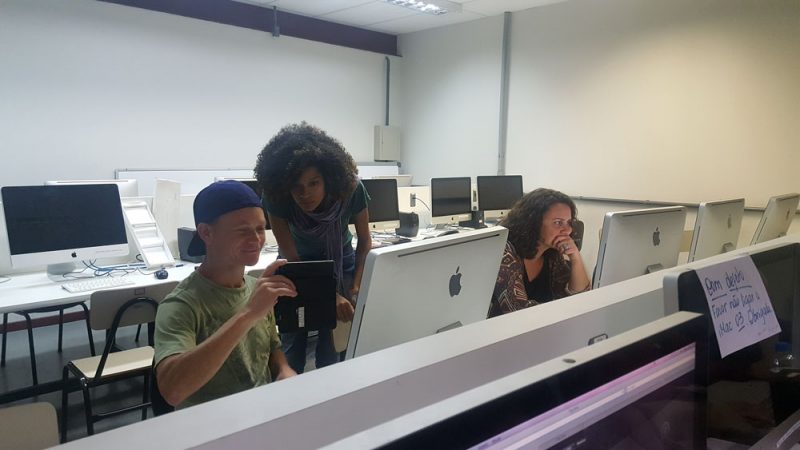 A Sirene's collaborators at their first newsroom at the University of Ouro Preto. Image: Jornal A Sirene, used with permission

The project is coordinated by a journalist and two editors-in-chief, the latter always people affected by the disaster. Before setting up their own office in Mariana, they used to run the newsroom out of a computer lab at the University of Ouro Preto.

In October 2018, Samarco finally reached a final compensation deal with Brazilian prosecutors. The settlement came in three years after the deadly incident, and it will take another year to be completed. Around 4,000 people could be eligible to claim reparations, according to prosecutors. About 500,000 people in two Brazilian states were directly or indirectly affected by the accident. The level of contamination in the Rio Doce basin is still uncertain.

But the battle isn't over. The next steps for such communities are, first, to have authorities ensure their ownership rights to the lands where their homes once stood, and second, to have the ruins of their villages officially recognized as places of memory. 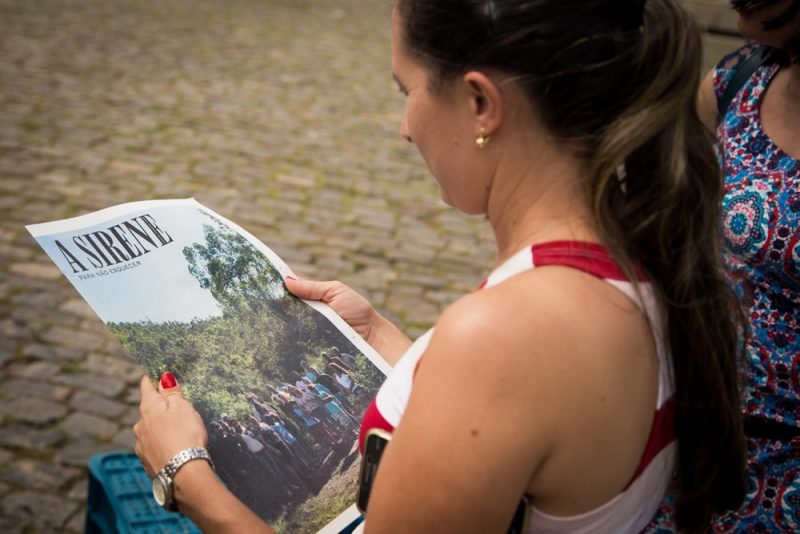 A woman reads the paper written by her community. Image: Lucas de Godoy/Jornal A Sirene, used with permission

In that sense, what we're seeing is a victory for the companies who committed this crime when it comes to control and possession of the land, how much they have damaged those spaces and now seem to own them. This means that there is a great inversion of values when it comes to almost everything involving the Fundão dam crime. It is no different when it comes to memory. But we don’t think that this is something communities are willing to give up on, we believe they are going to fight for it, because they understood, even before we did, that without memories it will be even harder to resume their lives (…) The paper’s goal, today more than ever, is this, of not forgetting it!