A pig carcass floats from China to Taiwan, triggering fears of swine fever 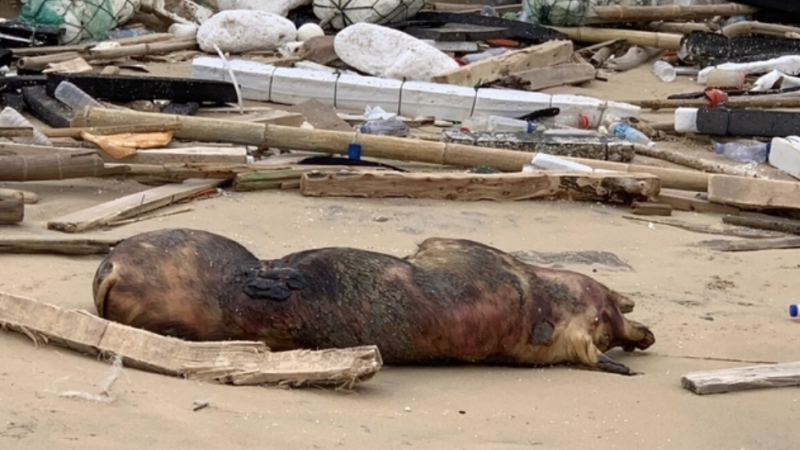 A dead pig found on the seashore of Kinmen island on December 31. Image released by Kinmen seashore patrol

When a dead pig washed ashore on Kinmen Island, Taiwan on December 31, it was more than just a sad sight.

The pig carcass tested positive for African Swine Fever (ASF). Although it is harmless to humans, ASF is highly contagious among pigs. It cannot be cured or prevented by vaccine and can be spread by live or dead pigs, as well as by pork products. Since August 2018, the deadly pig virus has swept across China, leading to the culling of more than 600,000 pigs.

In the fall of 2018, sausages from China that had been exported to Japan, South Korea, Taiwan, and Thailand tested positive for the virus. Experts are worried that if the virus continues to spread, it will bring economic catastrophe to multiple Asian countries.

In September 2018, Food and Agriculture Organization of the United Nations held an emergency meeting and sent warnings about the spread of ASF to officials from Cambodia, Japan, Laos, Mongolia, Myanmar, the Philippines, South Korea, Thailand and Vietnam.

When investigators tested DNA from the pig carcass found on Kinmen Island, they found that it was carrying a virus with the exact same genome as the virus found in China. Although it is part of Taiwan, Kinmen Island sits just beyond the shores of China's Fujian province. Investigators concluded that since Fujian also has had reports of ASF cases, it is likely that the dead pig had floated from Fujian to Kinmen.

Taiwan has 5.39 million pigs, and the pig farmers in Taiwan fear the spread of ASF from China. Among Taiwanese, the news has heightened fears that officia in China are not making every effort to contain the illness, especially when it comes to Taiwan.

Everything is political — even pig fever

These fears are not entirely unfounded. Relations between China and Taiwan have been strained in recent years, due to rising support for Taiwanese independence, including from sitting president Tsai Ing-wen. Beijing has suspended diplomatic contact with Taiwan, imposed economic sanctions, forced other countries to cut ties with Taiwan and has bolstered its military presence in the Taiwan Strait.

The incident has quickly become a hot topic on PTT, the largest Bulletin Board System in Taiwan. In one discussion thread, @dynamo said,

We found one dead pig here, and this one is ASF positive. Wonder what is the ratio of healthy pigs [to sick one] in China?

The discussion has also taken on political overtones. @devilkool compared the pig to a “biochemical attack”, in reference to rapidly rising tensions between China and Taiwan:

@z23061542 quipped that the Chinese Communist Party might have been responsible for its arrival:

The current makes it impossible to prevent [such incident from happening] and it is difficult to say whether it randomly floated here or sent by Chinese Communist Party with intention.

A cartoon by HolyMosquito, shared on Facebook, compared the threat of diseased pigs to military attacks against Taiwan from China that took place in 1959. The image garnered more than 5000 likes Andy shared more than 1000 times. 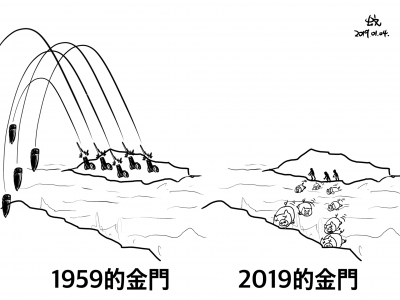 China has confirmed about 100 cases of African swine fever across 23 provinces since August 2018, but many experts believe the epidemic is worse than Chinese media have reported, given the country's tight constraints on information and media freedom.

For Taiwanese people, ASF has reignited fears from the 2003 outbreak of Severe Acute Respiratory Syndrome (SARS), a human disease that became pandemic and killed 349 people, according to China's Ministry of Health. Media in China suppressed stories about SARS and its dangers at that time, in what was later seen as an attempted cover-up that many believed exacerbated the spread of the disease.

Taiwan was seriously affected by SARS in the early 2000s, and now many fear that China is once again concealing the true condition of its ASF epidemic.

During our recent efforts to prevent an African swine fever epidemic, China's government has never followed the relevant agreements and provided Taiwan with accurate, real-time reports about the epidemic situation. Once African swine fever spreads to Taiwan, it will seriously impact the related industries, as well as people's livelihoods and the larger economy. More importantly, it will give the Taiwan public a negative impression of China. And that is something we do not welcome.

On January 5, Taiwan’s Ministry of Foreign Affairs posted a map showing how ASF has swept across China. The Ministry criticized China’s failure to control the spread:

#China can’t even manage its own pigs. African swine fever seems out of control. Time for @OIEAnimalHealth & the international community to intervene. JW pic.twitter.com/oW3Ujpmba6

Taiwanese customs officials are taking special precautions against ASF. In October 2018, authorities found ASF-positive sausages in an abandoned box near a customs station. DNA test results showed that the virus in these sausages was exactly the same as the virus in China. This was Taiwan’s first known case of ASF found in the food brought from China. Second and third cases were found in November 2018. Another two cases were found in December 2018. 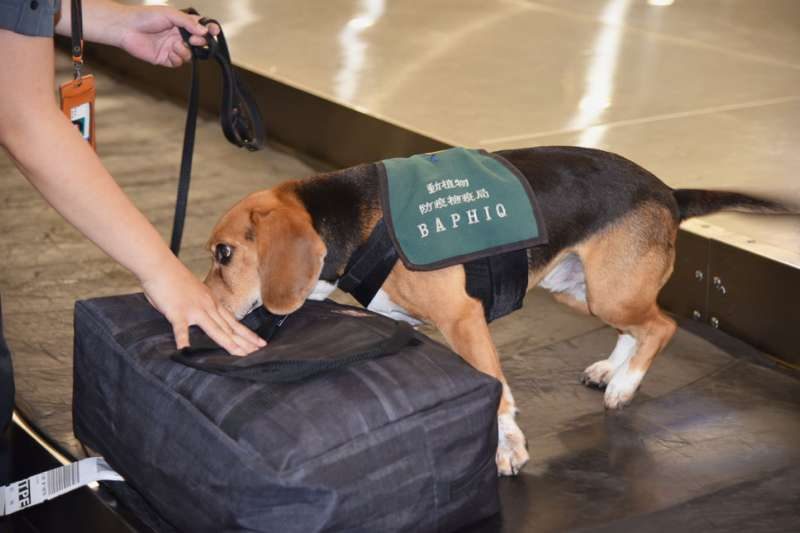 Dogs on duty to detect food in the baggage. Photo provided by Taiwan's Council of Agriculture.

To prevent the disease from spreading to Taiwan's pig population, the Taiwanese government bolstered border security to prevent travelers from bringing in illegal pork products since early December 2018. Yet despite these efforts, travelers continue bringing pork products into Taiwan. Customs detector dogs are now assisting officials by sniffing baggage for the presence of pork.

Please encourage these detector dogs working at the front line of disease control.
Please be empathetic and guard our national security together.

The Taiwanese government increased the fine for bringing pork products from China to one million NTD (USD $32,451.00) and issued warning about ASF through the mobile broadcast system, which is usually reserved for earthquakes and similar urgent events.