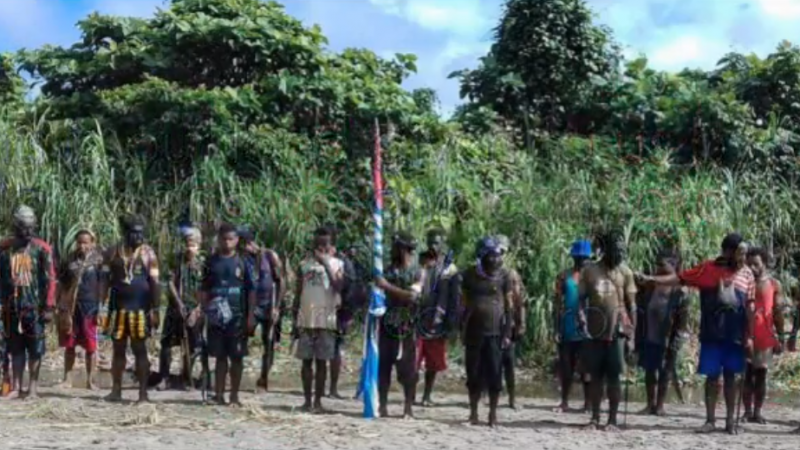 Screenshot of a YouTube video about a reported bombing in Nduga district of West Papua.

Editor's note: This post was updated on January 2, 2018, 15:45 GMT, to attribute reports of the use of chemical weapons by the Indonesian Miltary to the Australian weekly The Saturday Paper. We have also removed some (but not all) tweets with graphic images.

Content warning: The images embedded in this article may be disturbing to some readers.

Australian independent weekly, The Saturday Paper, reported on December 22, 2018, that Indonesian airstrikes on targets in West Papua were “suspected to include the banned chemical weapon white phosphorus”.

The Saturday Paper's story includes photos that show “flesh [that] appears to have been torn open or burrowed into, the victims’ clothing melted or cut away”.

An unnamed military source who spoke with the publication confirmed the use of chemical weapons:

A military source confirms the weapons “appear to be incendiary or white phosphorus”. The source says “even the smallest specks burn through clothing, skin, down to the bone and keep on bubbling away. I have seen it up close and personal and it’s a horrible weapon.”

An indigenous Australian reacted to the story on social media and included a photo published by The Saturday Paper in a tweet:

#Indonesia uses banned chemical weapons on #WestPapua civilians. #Australia’s continued silence in the face of the ongoing rolling #Genocide in West Papua speaks of a government and nation without morality, compassion or a shred of human decency https://t.co/8uWkdUPLMw

West Papua is a province of Indonesia. It is also the name used by separatists for all Papua territory ruled by the Netherlands until 1962. The area that became Irian Jaya was ceded to Indonesian control subject to an independence referendum in 1969. It was annexed following the so-called ‘Act of Free Choice’, which was rejected by local independence groups. In contrast to the TPNPB, the Free West Papua Campaign advocates peaceful self-determination.

Following the deaths of the road workers, the Indonesian House of Representatives (DPR) rallied the government to petition the UN to declare the OPM a terrorist group. 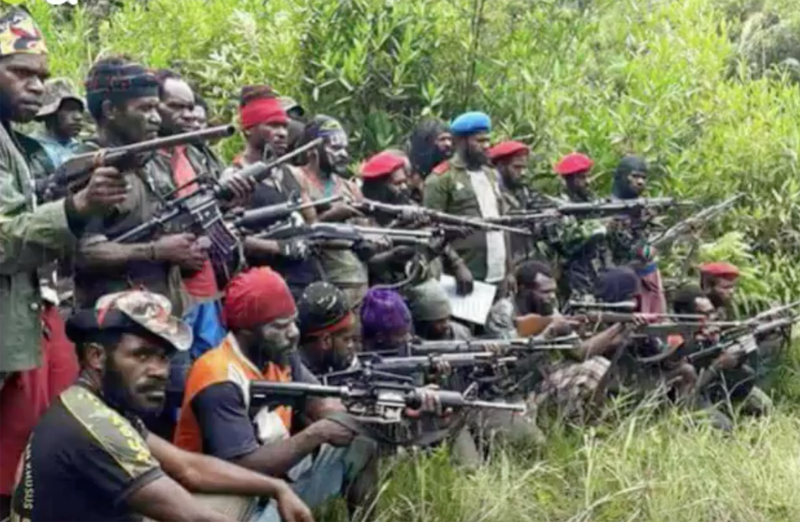 Screenshot from YouTube video about the attack on the Nduga district of West Papua published on Jul 26, 2018.

Denial by the Indonesian government

The Indonesian Ministry of Foreign Affairs swiftly denied possessing or using any chemical weapons, tweeting that:

1. Indonesia gravely deplores irresponsible media reporting practice as demonstrated by a printed and online media based in Australia, known as the Saturday Paper, on 22 December 2018, accusing Indonesia of using chemical weapons in its operations in #Nduga, #Papua .

3. As a compliant member of the OPCW, Indonesia has no possession of any chemical agents as listed in Schedule 1 of Chemical Weapons Convention.

5. The involvement of military component in the operation, most particularly air rotary wing assets, was strictly as assistance to law enforcement apparatus, and not a military deployment per se in an otherwise internal security operations.

Thank you MOFA, but you must realise that your record in #WestPapua has destroyed your credibility. Crimes and atrocities by your forces are already very well documented.

Indonesian user B Arifrn warned that the situation was still unsafe:

According the evacuation team in Nduga District: The people are still taking refuge.

A 14-year-old boy from Nduga area told BBC Indonesia his father had been killed.
"I saw two helicopters come down, everyone fled including my dad. Then police and military got out. And then the military shot my father." https://t.co/72NzCdcffF

The Speaker of the Papua parliament, Yunus Wonda, told BBC Indonesia:
"Villagers are traumatised and very scared. They have fled into the jungle. Christmas should be a time of peace but not a time of fear."

Local human rights activist Raga Kogeya said the community needed to be able to bury its dead in peace.
"We are not enemies of the state. We are citizens of Indonesia. The government has to take full responsibility for those that have been killed," she said.

An activist based in Central Java who requested anonymity confirmed that many locals in Nduga took refuge in the mountains. The activist told Global Voices that following the attack by TPNPB, there has been a crackdown on activists in many Indonesian cities where there are many Papuan students. The activist was forced to go into hiding out of fear of further repercussions from the authorities.

Another source in Jakarta also told Global Voices that news is scarcer than ever, as though the Indonesian government is trying to hide something.

There was considerable interest in social media in nearby countries, but much of the mainstream media in Australia was either slow to pick up or failed to cover the story:

I might have missed it, but I can't find any of the Australian Government, Opposition, any News Corp, Fairfax, Channel 9, 7 or 10 reporting on it. They would all know about it, but keep quiet. Without such media reporting it, I'd suggest 95%+ of Australians are unaware of it.

Australia was singled out by some for its perceived inaction:

The Indonesian military is suspected to have used chemical weapon white phosphorous during an attack on a village in West Papua. Has the Australian government said anything yet? https://t.co/KlhXiuiDnR

Foreign Minister @MarisePayne should be pushing for independent observers & media access to #WestPapua. We also need safeguards to ensure our military & policing assistance isn’t supporting this brutality in anyway https://t.co/VlJCPMatBr

Maire Leadbeater explored the chemical weapon claims and its ramifications on New Zealand’s The Daily Blog:

Experts who have seen the images believe it is possible that these wounds resulted from the use of some kind of chemical agent, possibly white phosphorous. Independent verification is impossible in the absence of independent observers or journalists.

Leadbeater argued that economic and military ties have prevented many Western countries, including New Zealand, from taking up the West Papua cause, but ended on a note of hope:

Vanuatu is leading the way in promoting a peaceful diplomatic solution for West Papua and plans to take a resolution to the UN General Assembly next year calling for the West Papua to be restored to the UN list of nations still to be decolonised. New Zealand could be a game changer by ending military ties and instead opting to support Vanuatu’s principled diplomacy. There isn’t much time to waste.

On December 20, the Free West Papua (FWP) campaign tweeted about mass arrests at rallies on the 57th anniversary of its annexation by Indonesia, and its founder Benny Wenda has called for negotiations:

My new statement: For a peaceful conflict resolution in #WestPapua, #IndonesianPresident #Jokowi must immediately withdraw the #IndonesianMilitary and begin discussions around implementing a #referendum in accordance with our right to #selfdetermination. https://t.co/6lNWrlOoEP

The Saturday Paper story was posted Reddit, receiving over 800 comments in four days. This one from beanzamillion21 expressed a widespread concern online about the lack of news about West Papua: “I had no idea. This is hardly covered in America.”

Meanwhile, the governor of West Papua, Lukas Enembe, has called for an end to hostilities and asked the Indonesian President Joko Widodo to withdraw troops from Nduga.