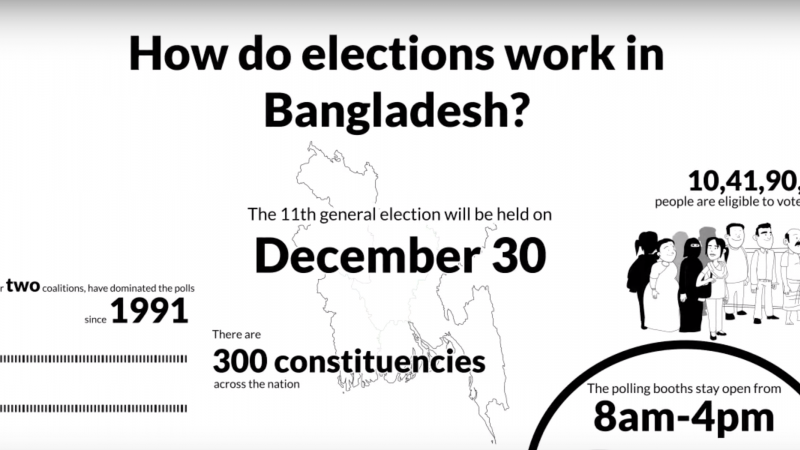 How do elections work in Bangladesh? Screenshot from YouTube Video by Dhaka Tribune.

Elections in Bangladesh are usually fanfares with crowds, noise, and tension. Millions of voters journey home to their own constituencies and candidates travel door-to-door asking for votes using innovative strategies like motorcycle rallies and assemblies.

On December 30, 2018, Bangladesh will hold its 11th parliamentary election to determine the 299 elected members of Jatiya Sangsad (national parliament) who will lead the country for the next five years.

Tensions mounted in the country on the night of December 27 when the Bangladesh Telecommunication Regulatory Commission (BTRC) ordered through an e-mail four mobile operators to suspend 3G and 4G services in a move to slow down the internet (to prevent video uploads and fast sharing).

The next morning, services were restored without explanation.

The election campaigns this year looked a bit different. The Grand Alliance, the coalition government led by Prime Minister Sheikh Hasina‘s Awami League, has been more prominent as the Jatiyo Oikya Front (National Unity Front), led by a five-party alliance, accused the government of creating a “climate of fear” by using tactics like the mass arrest of opposition activists.

The rivalry between the country's two main political alliances and their leaders is a source of political instability and the country was subjected to military rule a few times as a consequence.

The Jatiyo Oikya Front alliance includes the opposition Bangladesh Nationalist Party (BNP), who named lawyer and politician Kamal Hossain because their leader, BNP chairperson Khaleda Zia, is in jail after being convicted in a graft case earlier this year. The acting chairperson, her son Tarique Rahman, is a fugitive from the law in an assassination case and is exiled in the UK.

What you need to know about Bangladesh election

Jatiya Sangsad consists of 300 directly elected seats with single-member constituencies, and an additional 50 seats reserved for women based on the proportional vote share of the contesting parties. There are 300 seats to grab for the December 30 election, except one deferred following the death of a candidate. A total of 39 parties have posted 1749 candidates.

Bangladesh has a population of approximately 164 million with 104 million registered voters (above the age of 18).

This YouTube video by Dhaka Tribune narrates how election works in Bangladesh:

Four major alliances have a stake in this election:

In the 10th parliamentary election on January 5, 2014, the Awami League took advantage of a walkover with the BNP and other opposition parties, who refused to participate, citing widespread arrests of opposition members and pressing for their demand to hand over power to a ‘caretaker’ government — which the government claimed was unconstitutional.

20-Party Alliance: This alliance, led by the Bangladesh Nationalist Party, is the traditional foe of Awami League's Grand Alliance. It ruled the country winning the elections in 1978, 1991, 1996 and 2001. The pact currently consists of the Liberal Democratic Party, the Khelafat Majlish, the Bangladesh Kalyan Party, the Jamiat-e-Ulama-e Islam, the Jatiya Party (Kazi Zafar), the National People’s Party and the Labour Party among others. The BNP has a dark record of harboring religious extremism as it partnered with the right-wing Islamist party Bangladesh Jamaat-e-Islami, whose leaders have been barred from contesting in prior parliamentary elections because its registration was declared illegal in 2013. Its charter violated the constitution.

Jatiya Oikya Front (National Unity Front): This is a new alliance of five parties: the 20-Party Alliance has joined forces with the Gono Forum, the Krishak Sramik Janata League, the Jatiya Samajtantrik Dal – JSD and the Nagorik Oikya to create a new alliance in October 2018 and has chosen Dr. Kamal Hossain as its leader. The alliance has already shown some rifts over a number of issues.

A recent Human Rights Watch report finds that the government has used authoritarian measures on opposition political activists, including widespread surveillance, that has contributed to a climate of fear ahead of the elections.

According to the 37-page report, “Creating Panic: Bangladesh Election Crackdown on Political Opponents and Critics,”

The election commission has been accused of favoring the ruling party alliance:

In a recent Netizen Report, Global Voices highlighted that political activity and news are targeted online. The official website of the BNP was blocked for a period of time as the Bangladesh Telecommunication Regulatory Commission claimed the website presented “distasteful” content that could harm law and order.

On December 10, the BTRC temporarily blocked 58 websites on national security grounds, arguing that they contained “fake and baseless news reports.”

With more than 42,000 polling centers across the country, only 25,920 local observers have been cleared to monitor the polls. The number of local observers has been reduced significantly as the nongovernmental organization Affairs Bureau has not granted the “No Objection Certificate” to use foreign funds to carry out work of the 15 Election Working Group members.

An approximate 175 foreign observers are set to participate, but the Government of Bangladesh could not grant credentials and issue visas within the timeframe necessary so many will not make it.

U.S. is disappointed by Government of #Bangladesh’s inability to grant credentials & issue visas within the timeframe necessary to conduct a credible international monitoring mission to the majority of international election monitors from @ANFREL, which U.S. funded through @NDI. pic.twitter.com/FYEqjAY5sI

The election campaigns ended Friday, December 28, and the country will brace for elections on Sunday.

Kazi Anis Ahmed, the publisher of the Dhaka Tribune, opines that Bangladeshi voters have a hard choice to make between authoritarianism or extremism.