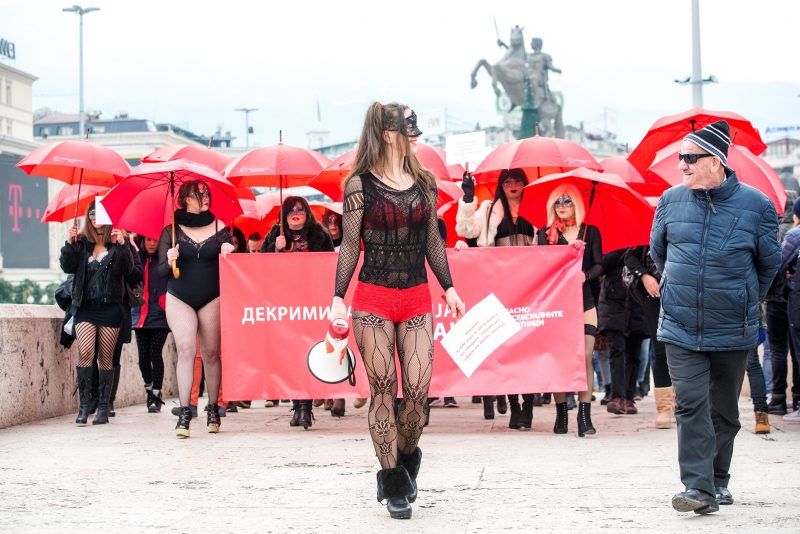 The International Day to End Violence Against Sex Workers [4] is observed on December 17 by sex workers [5], their advocates, friends, families, and allies. The day calls attention to hate crimes [6] committed against sex workers worldwide, as well as the need to remove the social stigma [7] and discrimination [8] that have contributed to violence against them and indifference from the communities they are part of.

The Macedonian march was organized by STAR-STAR, [9] the first sex workers collective in the Balkans as part of a global show of solidarity with this social group who are fighting against violence and discrimination. The participants announced:

We would like to send a message: “DECRIMINALIZATION NOW!” and encourage the institutions and general public to open the issue about regulation of sex work. Sex workers think that the decriminalization of sex work is the best policy for improving the health, well-being and human rights of sex workers. These efforts are based on the needs of sex workers to ensure protection of their human rights, to create safe living and working conditions, and prevent violence and exploitation.

The march took place in the center of Macedonian capital, with some of the participating sex workers wearing face masks and revealing outfits, shouting slogans such as “sex work is work.” This phrase has become an international hashtag (#SexWorkIsWork [10]) which is promoted by Sex Workers Outreach Project USA [11].

Sex workers are some of the most creative, strong, lovely people I've known.

On this International Day to End Violence Against Sex Workers, it is sad that my instinct is to ask you to see sex workers as human beings.

The spokesperson of the 2018 Skopje Red Umbrella March, who also wore a mask to remain anonymous, explained [15] that they want to humanize the needs of this marginalized group:

Do you know how many times sex workers would sell love, but get beating in return? How many times has their money been taken away? How many times woulf they want to call the police, but their phones were taken? How many times would they sell love, but be taken out of town by car and left in Vodno mountain naked and barefoot? How many times have they needed police and social protection, but would need to go to bed with their mouths shut? Our message for decriminalization is not about legalization! Decriminalization means regulating the rights of the sexual workers and regulating their social and health care. Sexual work is product of this society, and the system is responsible for providing care [for all its members].

The choice of attire is intentional, as part of the philosophy of sex worker human rights defenders to confront the stereotypical representation of these people in the media. This and previous advocacy campaigns are based on reappropriating the use of their own imagery to draw attention.

Read our latest blog and get inspired: sex worker human rights defenders in Macedonia claiming back the use of their own imagery as part of their advocacy campaign. #SexWorkIsWork [13]@star_sexwork [16] @sexworkeurope [17] @SWAN_Network [18] @tampepeu [19] https://t.co/s3MyatmHa3 [20]

The main target of these advocacy campaigns are the state institutions, in particular, the legislative branch, as participants demand changes to in the Criminal Code which has remained unchanged for three decades since the fall of Communism. The Law on Preserving Public Order and Peace has also been unchanged, with exception to increasing penalties for sex workers.

The marchers urged Macedonian authorities to consider the model for decriminalization from New Zealand, which acknowledges the labor and human rights of sex workers. 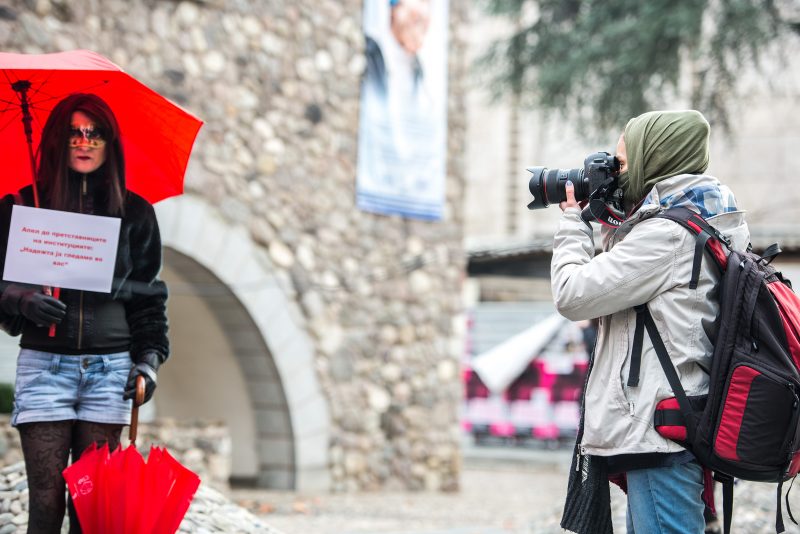 “Appeal to the representatives of the institutions: ‘We place our hope in you.'” sign held by a participant of the “Red Umbrella March” in front of Memorial House of Mother Theresa in Skopje, Macedonia. Photo by Vančo Džambaski, CC BY-NC-SA. Part of an CC-licensed album of 186 photos [2].

At the march, STAR-STAR Executive Director Borče Božinov quoted a survey from the NGO HOPS – Healthy Options Project Skopje [23] which collected responses from 310 sex workers. 211 stated they had been subjected to various forms of violence, including sexual, physical and psychological violence. 87 percent of sex workers had experienced violence from their clients, 43 percent had admitted to experiencing harassment and demeaning conduct by the police, and 28 percent of sex workers had experienced mistreatment from their families.

STAR-STAR claims that the number of people involved in sex work has “increased enormously ” during the previous 15 years, while “the state has not introduced a clear normative system to regulate these activities and take care to integrate the sex workers into the social, health and legal system…”

Decriminalizing prostitution could dramatically reduce sexual violence and sexually transmitted infections, according to a research study published in the Review of Economic Studies in 2017, as reported by the Independent [24]. It found that when prostitution was decriminalized in Rhode Island, sexual violence fell by 30 percent and female gonorrhea incidence decreased by more than 40 percent. 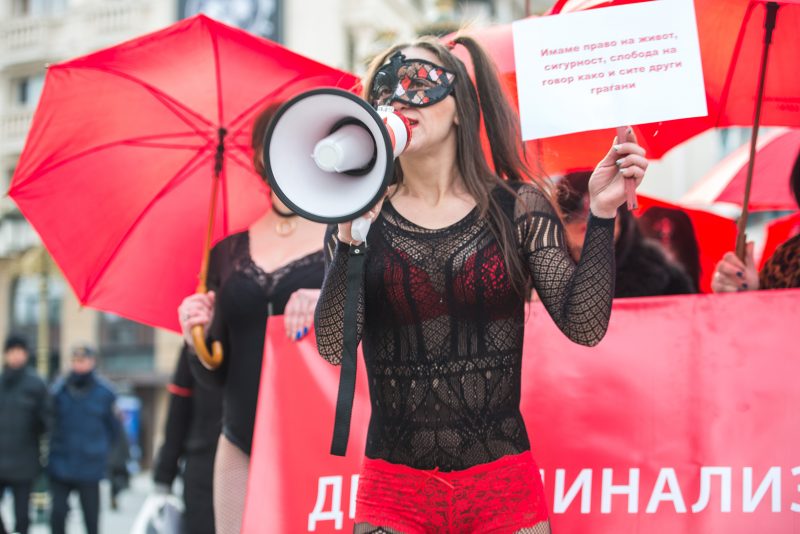 “We have right to life, safety, and freedom of speech, just like all the other citizens.” sign held by a participant of the “Red Umbrella March” in Skopje, Macedonia. Photo by Vančo Džambaski, CC BY-NC-SA. Part of an Creative Commons-licensed album of 186 photos [26].

Macedonian authorities have ignored the demands of the Red Umbrella March activists since protests began 11 years ago, and so far, there is no public record that the reaction from state institutions has changed.