Villagers in Toliara, Madagascar, demonstrate against the expropriation of their ancient lands by Toliara Sands. Photo by RSCDA-IO, used with permission.

As Madagascar elections near, its future is up in the air, and the question of land mining and land grabs by foreign multinationals remains a key issue for Malagasy citizens.

The root cause of Madagascar's 2009 coup was the prospective sale of arable land to the South Korean company Daewoo. Investment in Madagascar land has increased significantly since then.

In 2018, Randriamaro and RSCDA-IO received the United Nations Prize in the Field of Human Rights [3] for their remarkable contributions to the rights of farming and fishing communities in Madagascar.

Global Voices interviewed Randriamaro about infringements on local communities by land investors like Toliara Sands, the company that, in 2016, obtained an operating license for a 32 square kilometer mine and a research permit for three other mines, bringing the total area of its mines in Madagascar to 407 square kilometers.

GV: Reviewing the texts of the mining laws and regulations in Madagascar and their practical applications, would you say that they are overall satisfactory, alarming or “could do better”?

Zo Randriamaro (ZR): The Madagascar land problem is characterized by the contradiction between [law reform] texts and regulations … [A]lthough they resulted in significant progress, their practical applications were unsatisfactory. Recognition of land rights of native occupants, who comprise the great majority of land owners in Madagascar, is duly written into the land legislation and regulations. However, these rights are poorly respected in practice …

GV: From outside, it seems that Madagascar is often affected by more mining controversies than other countries. Is this is perception justified and, if so, why is this such a touchy subject in Madagascar?

ZR: This perception is justified, taking into account the fact that recent studies showed Madagascar to be one of the countries most affected by the problem of land grabs in Africa. Land claims have become more disputed within a context where almost eight in 10 Malagasy citizens live in poverty and depend on land for their livelihoods and survival. The subject has become all the more delicate as it concerns a fundamental aspect of Malagasy culture, which assigns a spiritual value to the land. It is considered a common asset for all the Malagasy people, including ancestors and future generations, therefore selling land to outsiders is strictly forbidden.

GV: You have often sounded the alarm about actions to silence local rights defenders, most recently in the case of reprisals against the [community-based organization] MA.ZO.TO in the Toliara Sands case. Could you summarize the key points in this case and authorities’ reactions?

ZR: The Toliara Sands case concerns the mining project majority-financed by Australian company Base Resources for mining ilmenite and precious heavy metals (rutile, zircon and leucoxene) along the southwest coast of Madagascar. The [company] headquarters are registered in the tax haven of Mauritius, which, thanks to the bilateral tax treaty [4] between Mauritius and Madagascar, allows it to pay just 3 percent tax on its assets to Mauritius.

Since October 2014, public consultations in the areas affected by the mining project and in the town of Toliara have given several waterside communities the opportunity to voice their rejection of this project.

This rejection was reaffirmed and detailed in a memorandum dated November 5, 2014, which was presented by the leaders of MA.ZO.TO, who united affected waterside community representatives with leaders of the National Office for the Environment responsible for issuing the required environmental permits …

This memorandum reported the opinions of representatives of 17 [districts] … who spoke out during the public hearing at Toliara on October 19. [Their] first point … concerns the lack of transparency in communication between the population, the company and the authorities, notably the lack of information provided on negative impacts of the project … and the planned measures to avoid them.

This memorandum [lists] the [numerous] risks and unavoidable threats … and shows that the fundamental right to nourishment and somewhere to live are threatened … [including forest destruction, multiple forms of pollution, lack of water supply, loss of homes, displacement, inflation, radioactivity and loss of local customs, among others].

[A] 2006 Social and Environmental Impact Study [5] stated that … this project would lead to displacement … of inhabitants as well as the areas of pasture, agricultural land and natural resources … It would also lead to [environmental] destruction, including the living areas and food sources of waterside communities.

… [The] authorities underlined that in all cases, ‘the development must happen,’ showing their deliberate desire to shut down the legitimate opposition of the threatened waterside people, and showing that their vital interests do not count …

… [The] Council of Ministers on April 11 and July 18, 2018, stressed the public utility … of the mining project [as well as mining work in other areas].

Following [the Council's] decision, the affected communities mobilized to reaffirm their opposition to the Declarations of Public Utility (DUP) in favor of Toliara Sands, particularly the Vezo fishing community, who robustly voiced their opinions … during a public demonstration on July 27, 2018.

With the support of RSCDA-IO, the MA.ZO.TO association filed a request to annul these DUPs with the State Council, and started an online petition [6]. 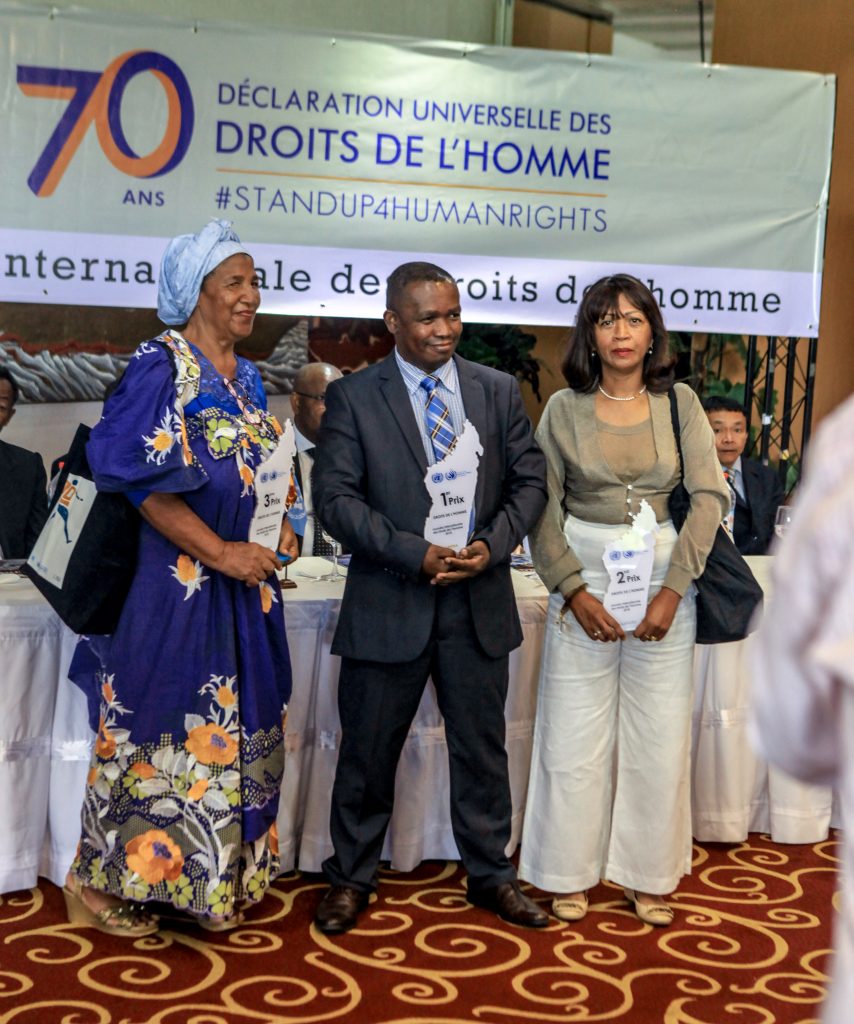 GV: Your fight for community rights started long ago. Can you tell us about your journey? Is there one case in particular that stands out in terms of violating the rights of local communities?

ZR: RSCDA-IO was founded in 2012 [amidst] severe political, social and economic crisis … It was founded by a small group of experts, researchers and development practitioners guided by a vision of a society in which every single Malagasy citizen lives with dignity, equal rights, and [freedom] from poverty and all forms of danger.

To this end, the domains of land ownership and private investments in the sectors of agriculture and extraction industries are the highest priority areas for RSCDA-IO …  RSCDA-IO currently coordinates the Independent Observatory of Economic, Social and Cultural Rights of Madagascar (OIDESCM), which has branches in eight regions …

Actions to defend and promote human rights take place at several levels, prioritizing technical and financial support for defending the rights of affected communities against the great mining projects, protection of land rights and land ownership security, awareness of economic, social and cultural rights, training in land and mining legislation, defending [occupants’] rights, legal assistance for victims and support for the development of alternative revenue-generating activities for women.

RSCDA-IO also initiated [a] process of development and consultation with civil society, government and state institutions, and the private sector with respect to the Tripartite Agreement [8] to respect human rights and sustainable development …

I was particularly struck when Andriomatoa Ravela, a member of the regional branch of the Independent Observatory of Economic, Social and Cultural Rights coordinated by RSCDA-IO, was arrested and convicted [9] with a two-year suspended sentence on the basis of the false accusations.

This was solely because he demanded to see the permits authorizing a Chinese company to mine for gold in the Isaka river which bisects his hometown in the district of Mananjary. He had proven that this company was operating illegally and was using mercury with catastrophic effects on the environment and the health of the riverside population.

RSCDA-IO continues to support him in the trial to rescind the judgement, while the Chinese company continues its operations with complete impunity.

GV: What is your opinion on the potential for economic development that international investors bring?

ZR: In my opinion, it's not a question of being for or against international investors, although world economic history shows that a process of foreign economic development conceived and implemented with the participation of native communities has a greater chance of lasting success.

… Madagascar must start by setting up a system of regulations to ensure international investments will contribute effectively, enabling economic development targets to be met, while respecting the rights of all Malagasy citizens and the imperative to protect the ecosystems and biodiversity of the [unique] natural heritage …

GV: You work with many organizations to defend rights. Does each organization have a specific function or expertise? How is it usually coordinated?

ZR: The choice of partners is [based on] the expertise they can bring to [various projects]. Coordination is based on a partnership agreement defining the roles and responsibilities of each party. Local organizations are generally responsible for community-based activities, while the RSCDA-IO team looks after their technical support and actions to be taken on a national and international level.

GV: In current cases, which factors could swing in favor of local communities?

ZR: The determining factor is definitely the political will of the government to listen and pay attention to the voice of local communities, while the increased awareness of public opinion and intervention from international partners could heighten pressure on governments so that this political will becomes effective.

GV: At the individual level of the average citizen, how can we help?

ZR: It is crucial that these communities know that they are not alone in their fight and that other citizens support their cause. Everyone can show their solidarity in the way that seems most appropriate to them — for example, many can write to the new president to ask him to cancel the DUP in favor of Toliara Sands.