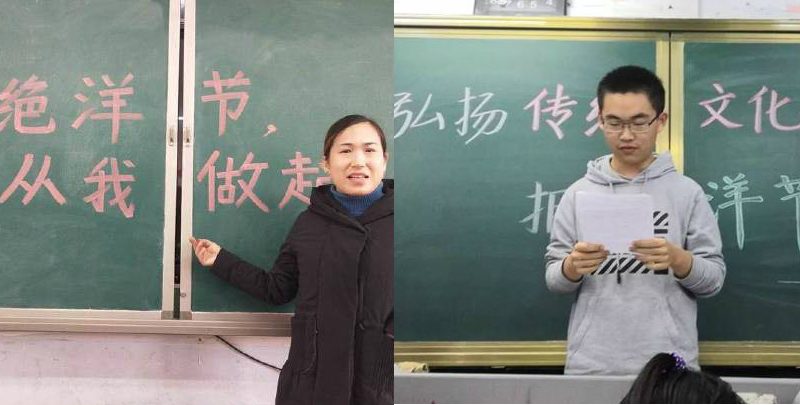 Christmas is approaching but instead of feeling joyful, many in mainland China have expressed frustration over China's ideological campaign against Christmas as a Western festival.

In 2017, the Communist Party of China's central committee and state council issued an official document entitled “Suggestions on the implementation of projects to promote and develop traditional Chinese culture excellence”. They outlined a cultural revival project that lists Chinese festivals like the Lunar New Year and the Lantern Festival, among others, as cultural conventions worthy of celebration.

To implement this policy, Chinese authorities have launched a series of ideological campaigns to crack down on non-Chinese celebrations. This year, just before Christmas, authorities in some cities such as Langfang, in Hebei province, have demanded shops to remove Christmas decorations on the streets and in window displays.

Anti-Western festival commentaries have flooded Chinese social media, making Christmas celebrations a difficult choice for some who feel they must keep their joy a secret. 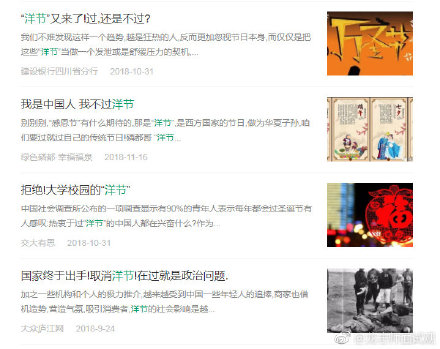 For example, a widely circulated one said:

If people of a nation are too enthusiastic in celebrating other nations’ festivals, it indicates that the country is suffered from extremely serious cultural invasion. If party members and government officials are not aware of this, it means that they are not politically sensitive and have lost their progressiveness.

The commentary references the history of the Eight-Nation Alliance, a coalition formed in response to the Boxer Rebellion in China between 1899 and 1901 when Chinese peasants rose up against foreign, colonial, Christian rule and culture. It further argues that the birthday of Mao Zedong, the founding father of the People's Republic of China, should be treated as China’s Christmas:

The first Chairman of the Republic of China Mao Zedong had saved people from misery. We should make his birthday Chinese Christmas. Act and reject Western festivals.

But many on Weibo found these arguments illogical. One commentator said:

When Westerners celebrate the Chinese Lunar New Year, Chinese people are so proud and see the phenomena as the revival of Chinese traditional culture … When Chinese people celebrate Western festivals, what's the point of labeling them as culture invasion? Young people celebrate Western festivals for fun and joy. The festivals can boost consumption, what’s wrong with that?
Some people try to draw connection between celebrating Christmas and the national humiliation that happened 160 years ago. For what?

The flood of anti-Christmas comments on social media has generated pressure for some social media users to self-censor. A Weibo user expressed frustration:

Christmas is approaching. In my friend circle, anti-Western festival camps and anti-anti Western festival camps are debating. Whether one likes to celebrate or not is none of others’ business, why do people just have to force others to agree with their view? Everyone standing on one side is too crowded. For those of us who are in the middle, in order to create a balance, we have to stand on the other side. 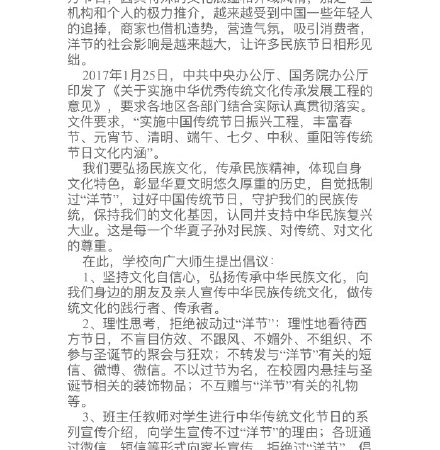 School notice against the celebration of Western festivals on campus.

Pressure goes beyond social media platforms, extending to institutions such as schools and corporations.

Some Weibo users have shared school notices that were distributed to students. One of the notices (right) refers to the “Suggestions” mandate and urges teachers and students to resist Western style celebrations.

It also demands students to spread anti-Western messages to friends and family members on Wechat and other mobile messaging applications.

One mother was surprised to find her child rejecting her offer of a Christmas gift. She wrote on Weibo:

Mother: Baby, what do you want for Christmas gift?
Child: I will not celebrate Western festivals Christmas is not a Chinese people’s festival.
OK, you are definitely an obedient baby of the Party and the People.

However, high school and college students were more critical. One student questioned school policy on Weibo:

The school has banned Christmas decorations on campus and forbidden students to exchange gifts so as to campaign against Western festivals. Are all these measures to enhance and promote Chinese culture or a sign of losing confidence on one’s own culture?

Some have chosen to celebrate the festival in secret. A Weibo user said:

The company has forbidden the celebration of Western festivals. But the secretary in the personnel department has handed out a Christmas apple [common Christmas gift] to the staff members in secret. Let’s wish for peace.

Another Weibo user expressed his view with a Christmas wish:

Merry Christmas! I love you god! Santa Claus, pls give me a big big sock with freedom in it.