Student protester in Hungary: ‘I don’t want to go to jail for something I haven’t done’ 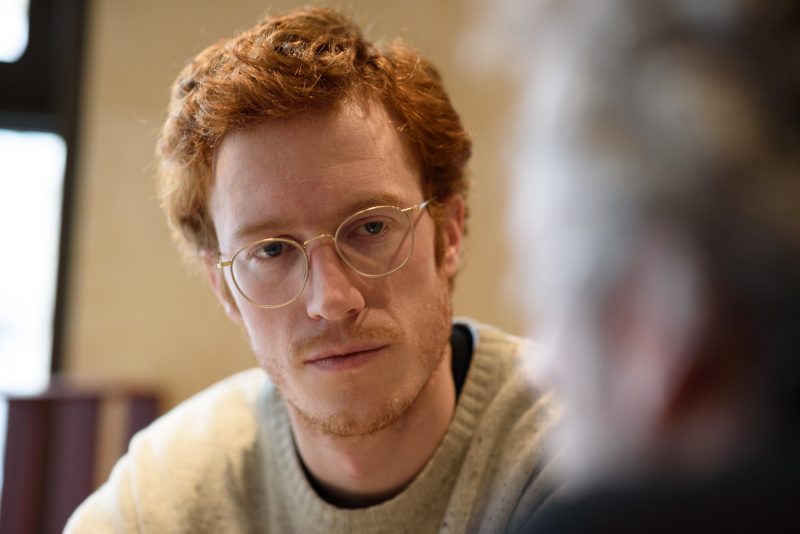 Editor's note: The author of this article is a Central European University (CEU) graduate student.

He has been called the ‘perfect enemy of the Orbán regime’, but Belgian-Canadian Adrien Beauduin says it is all a misunderstanding. Beauduin, a Gender Studies Ph.D. researcher at the Central European University (CEU) in Budapest, was arrested during a protest last week at Parliament Square and is now being charged with “violence against a representative of order” — a charge which could lead to two to eight years in prison.

Protests against Hungarian Prime Minister Viktor Orbán's right-wing government started on December 8 in reaction to the so-called “slavery law” which would raise the cap on annual overtime that employers can request from their workers to 400 hours, and another law which makes it easier to place judges that are favorable to Orbán's government in seats of judicial power.

Since Orbán took power in 2010, he has been accused of eroding democratic freedoms by progressively controlling the media and the judicial power, as well as curbing academic freedom with an amendment of the higher education law that is ousting the Central European University from the country.

Global Voices spoke with Beauduin on campus at CEU about his student activism in Hungary, the night of the protest, and how he plans to prove his innocence.

Global Voices (GV): You have been an active member of the Students4CEU student activist group. What activities have you been doing?

Adrien Beauduin (AB): I’ve been involved there since the beginning, we’ve been mobilizing since the end of October. We have been trying to attract attention to the issue of academic freedom in Hungary, not just of CEU but also the wider issue such as the ban of Gender Studies [in Hungary], cases of censorship in academia, and budget cuts and plans to privatize Corvinus [University]. Our goal was to reach out to all students in Hungary and work together on all those issues. It took a while for us to build links with other students at Hungarian universities, the first event we joined was together with some ELTE (Eötvös Loránd University) and Corvinus University students. We went to ELTE’s information strike on the 14th of November to support them. It was mostly about Gender Studies but also about academic freedom in general. We co-organized a big demonstration on the 24th of November that was followed by a week-long occupation of Kossuth tér, the square in front of the Hungarian Parliament. We set up tents, and despite rain, cold and snow we held out for a whole week. We held all kinds of events, concerts, lectures both in Hungarian and in English. More than half the events were not CEU-related so we managed to make it a wider event about celebrating academic freedom in Hungary.

GV: The student protests were over when the December 1 deadline passed and CEU made its final decision to [leave Hungary and] establish a campus in Vienna. Have you been active since then?

AB: During our occupation, new topics came up. There was this new so-called ‘slavery law’ that exposes a worker to work up to 400 extra hours being paid only 3 years after the work done. We decided to show solidarity with them [the workers] because we understand that it doesn’t make any sense for a country to have free universities when you don’t even have free workers. We thought it’s important to use the space we have to bring attention to that issue. We started to be active on that front, and that also led us to be present with a student block at the trade unions’ demonstration on 8 December. Since then things got even more intense. Some of us went to block a road with the trade unions in Szolnok to show once again our solidarity. I was there and it was very positively received by the workers who saw CEU students and understood that we stand with them. Then on Wednesday [12 December], we were also there, already in the afternoon when the slave law was passed, to protest it with the student block. In the evening I went back to the square after being at the library. That’s the point when I got arrested.

GV: On Wednesday (December 12) you were at the library…

AB: Yes… First, I was at the demonstration and then went to the library in the evening, I had to finish a paper. I even had my skates with me because I wanted to go skating in the evening. That was my plan. I didn’t know there would be a big protest. Around 9.30 or 9.45pm I heard some of my friends were there so I took my things after submitting my paper, and I went to the square. 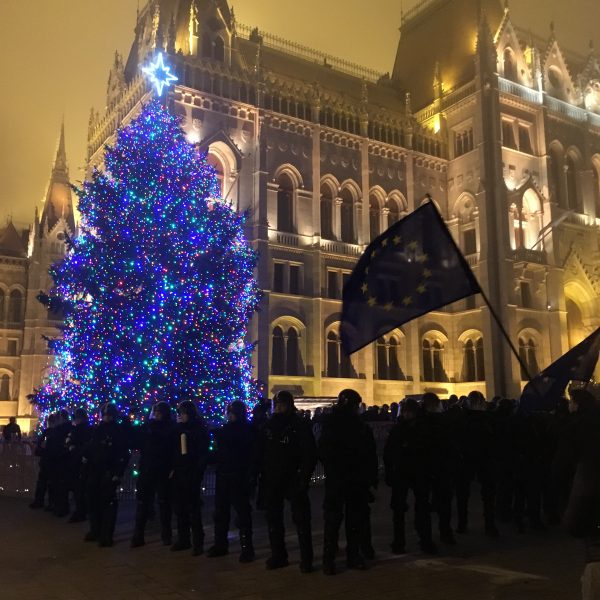 GV: What happened there, were speeches made?

AB: At 10 pm no, the crowd started moving toward the south entrance [of the Parliament building], then the riot police were becoming more active. Some people sat and blocked the south entrance. The police started to massively use pepper spray. I got pepper sprayed. After a while, the crowd moved back towards the square. About 11.45 pm I was about to go home, it was more peaceful already. Then some people started to put a sled on fire [there’s a circle made of sleds around a huge Christmas tree on the square]. Then the police decided to charge that way, I don’t really know why. Apparently, they wanted to put out the fire but I got caught up in that charge because I was thrown towards the fire, people were falling [to the ground] that was kind of scary. I tried to stand my ground, I had to gain my balance then I was thrown back and forth, and I just ended up behind the police line and they picked me up.

GV: Did they pick up more people?

AB: I didn’t see that at first but at the place I was brought, under the arches of the Parliament, there were four other people with me. Those people were with me at the police station and at the procurer’s office. The five of us were accused of exactly the same thing. Group violence against a representative of order. We have literally the same charges. All five of us as far as I know based on what the others told me in the cell are accused of hitting with their left arm and kicking towards the police. It would be quite strange that all of a sudden all five of us decided to hit with the left arm and kick… But it’s a very serious crime here in Hungary, probably everywhere. It means 2 to 8 years in prison, and my lawyer says that if I’m found guilty there wouldn’t be a lot of chance to avoid prison.

GV: Is there a way for you to challenge this now?

AB: My group of friends, all the people I was with have been mobilizing to collect evidence. They were incredible, while I was in jail they started very quickly to collect all the videos, photos and testimonies. It’s quite nice that there’s a video that shows me just before and during the charge, I’m just there being peaceful, you can see my face several times, and I’m not hitting policemen or kicking. I’m just there. You can see my legs also during the charge, I’m just caught by the police and both my legs are on the ground. That’s not so bad but I wish I had direct full footage of everything. I could sleep more peacefully. I’m hoping the police footage will help me but from what we’re seeing now it doesn’t seem that there was a police camera at that point. I’m still hopeful that that could help. 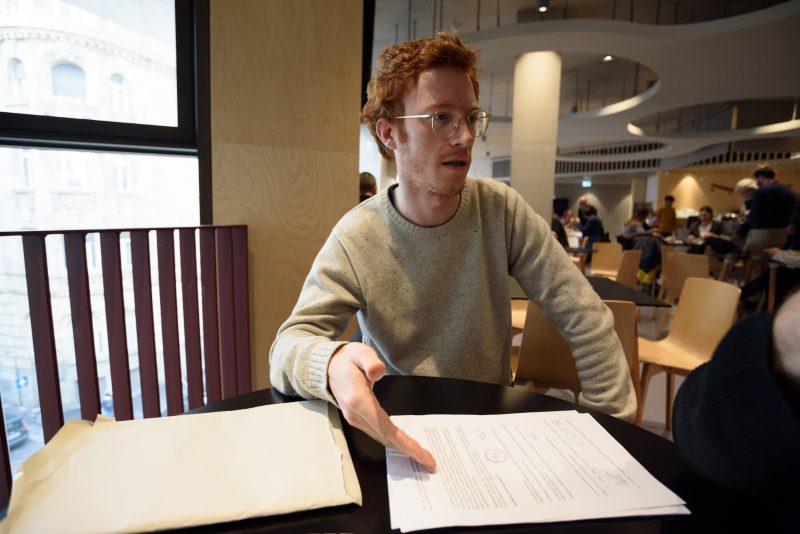 GV: What’s your advice for people in a similar situation? Sounds like this could happen to anyone in any Hungarian city these days.

AB: It’s really good to have a lot of cameras at the protest, to have people filming. Also, stick with your friends more because I was with many friends but I just wandered off for several minutes and now it’s harder to find the witnesses. Unfortunately, you can never be sure.

GV: I know it’s not an easy question to answer but what do you think about the events of the past days?

AB: The people I was with in the cell, they’re not political people. They’re just young people who are very frustrated about the fact that they have to work crazy hours for very low wages. I think there’s a lot of frustration in [the Hungarian] society around different issues. I hope everything will be resolved in a peaceful way.

GV: How is your end of term going?

AB: It’s very difficult because on top of not having a lot of time, it’s really hard to concentrate, and before I was already very active, and now I get scared sometimes. I don’t want to go to jail for something I haven’t done. That’s not really my plan for the new year.