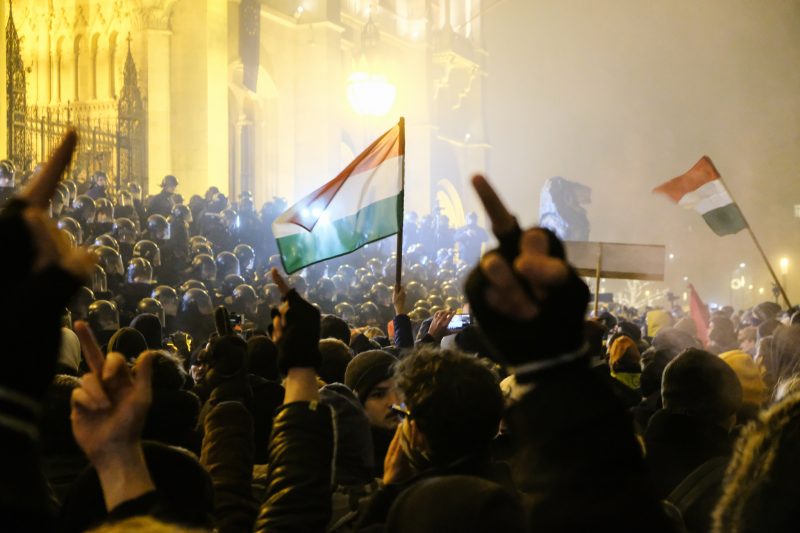 Protest in front of the Hungarian Parliament in Budapest on December 13, 2018. Photo by Atlatszo.hu / Márk Tremmel, CC BY-NC-SA 2.5.

This article is based on the story “Hungarians protest against the government in front of Parliament every night” written by Anita Kőműves, with photos by Márk Tremmel and Áron Halász for Atlatszo.hu, Hungary’s first investigative journalism non-profit. It is republished here in edited form through a partnership with Global Voices.

Hungarians have been protesting in front of the Parliament building and across Budapest since Viktor Orbán’s right-wing party passed a bill allowing employers to request 400 hours of overtime work from employees annually as well as a bill which would make it easier to fill the court with judges that are loyal to Orbán's party. Despite the cold weather, protesters were out in the streets until after midnight every night — actions which were met with police tear gas.

The Hungarian Parliament passed two important bills on Wednesday. Even though opposition parties protested the two bills, the body dominated by the governing right-wing conservative party Fidesz (Hungarian Civic Alliance) was able to pass the so-called ’Slavery Law’ and a law creating a new court system.

December 12, 2018 — The day Hungary's opposition surprised A LOT of people. (wait for it) pic.twitter.com/pM6a1GsLPq 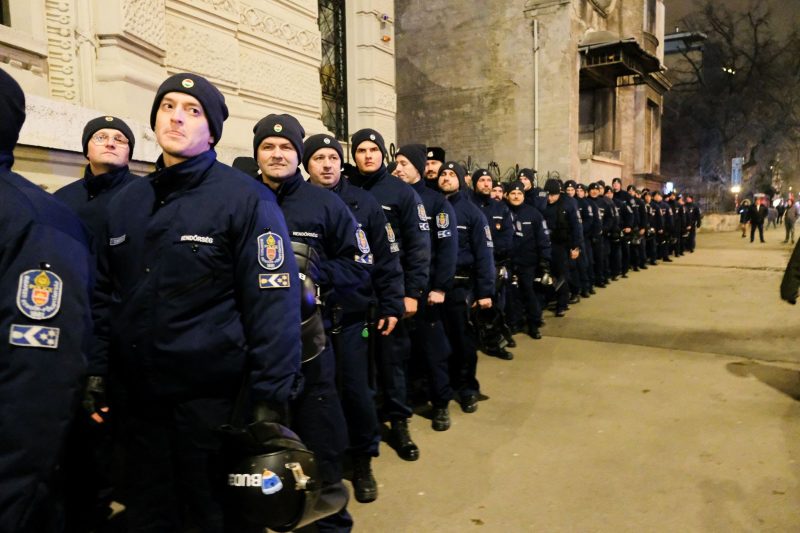 Policemen lining in front of parliament in Budapest, Hungary. Photo from the album from the first night of protests, by Atlatszo.hu / Márk Tremmel, CC BY-NC-SA 2.5. Click on image for album.

The so-called ’Slavery Law’ will raise the 250-hour annual cap on overtime work to 400 hours. Moreover, employers will be able to take up to three years to pay compensation for the overtime work.

According to the law, employees need to agree to the overtime in writing, but protesters claim pressure from employers will leave workers with no choice but to accept the new terms.

The first three nights of the protests 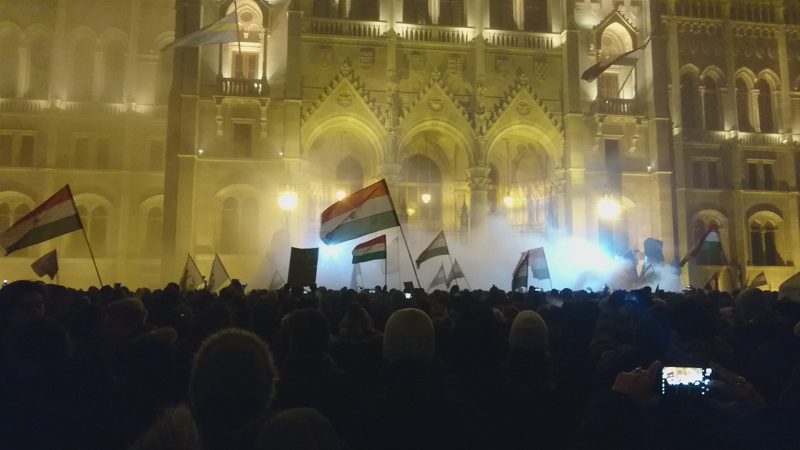 Protest in front of parliament in Budapest, Hungary. Photo from the album from the second night of protests, by Atlatszo.hu / Áron Halász, CC BY-NC-SA 2.5. Click on image for album.

Since the bill passed, protests have taken place in front of the Parliament, with thousands of protesters walking around Budapest streets loudly chanting anti-government slogans, and briefly blocking roads and bridges. Some of the protesters returned to the Parliament building where they chanted slogans facing riot police.

Despite the cold weather and the Friday night snow, protesters were out in the streets until 1 or 2 a.m. every morning.

Many protesters were detained during 2nd night of unrests after Orbán Administration passing #SlaveryLaw. Vice President of Momentum currently at a police station, the access to her lawyer has been denied so far, @hvg_hu reports. #Budapest #Hungary Pics: @444hu pic.twitter.com/Ax1czDgfvi

Unlike protests in previous years, police used tear gas during the demonstrations which angered protesters.

They just sprayed the crowd pic.twitter.com/KfQRD9lMGO

Demonstrators used smoke-screen bombs, burned small handkerchiefs and newspapers and one window of the Parliament was broken by a stone thrown by a protester. 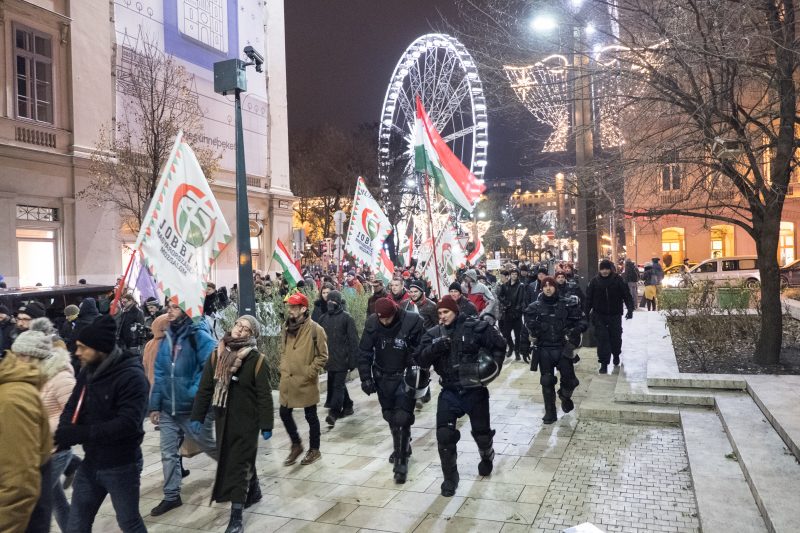 Protest in Budapest, Hungary. Photo from the album from the third night of protests, by Atlatszo.hu / Márk Tremmel, CC BY-NC-SA 2.5. Click on image for full album.

The protests continued on Sunday afternoon at Hero’s Square. Student organizations, opposition parties, and trade unions announced that they would join the protests.

Thousands of Hungarians are protesting at the public broadcaster because of its continuous propaganda. pic.twitter.com/TfIAUIKX4G

The Police used tear gas against protesters in front of the headquarters of the public broadcaster TV. Atlatszo.hu documented these developments by providing a live video feed from the scene on Facebook.