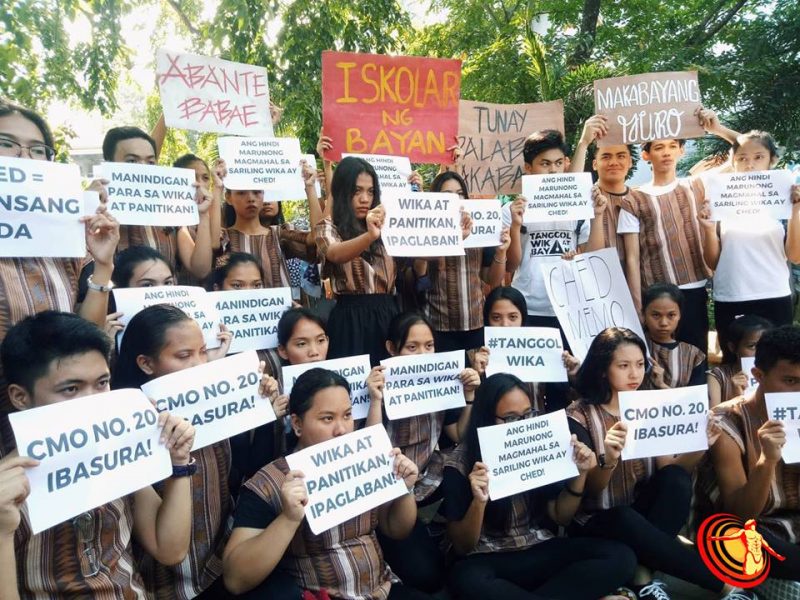 Manila students protesting against the removal of Filipino as a required college subject. Photo by the Manila Collegian, used with permission.

A group of Filipino professors, scholars, and students in the Philippines is leading a campaign against government steps to remove the mandatory teaching of Filipino language and Panitikan (literature) at the college level.

Along with English, Filipino is one of the two official languages in the Philippines, where over 185 are spoken. It is the country's national language and main lingua franca.

On October 9, 2018, the Supreme Court upheld the legality of the Commission on Higher Education (CHED) Memorandum Order 13 of 2013 which officially removes Filipino and Philippine literature from the General Education curriculum in colleges and universities. The SC decision overturns a temporary restraining order secured in 2015 by opponents of the CHED measure.

CHED justifies the curricular changes by reasoning that the said subjects are already taught in the basic education curriculum. This comes amidst the implementation of the K-12 program, which since 2011 have added two more years of senior high school.

But critics say the anti-Filipino curricular changes reinforce an educational system inherited from the American colonial era that privileges English and trains students for the foreign labor market. The erasure of Filipino is seen as part of wider educational packages that marginalize the humanities and other academic fields considered non-essential for the formation of young Filipinos for the cheap labor needs of big business.

Various groups are leading protests and legal actions against the erasure of Filipino and Panitikan in college. Tanggol Wika (Defend our language), an alliance of professors, students, writers, and cultural workers has filed a motion for reconsideration at the high court last November 26, 2018. They warn that 10,000 teachers could end up losing their jobs due to the curricular changes.

Filipino advocates are encouraging netizens to post statements in support of the preservation of Filipino in college using the hashtag #TanggolWikaAtBayan (Defend our language and nation). 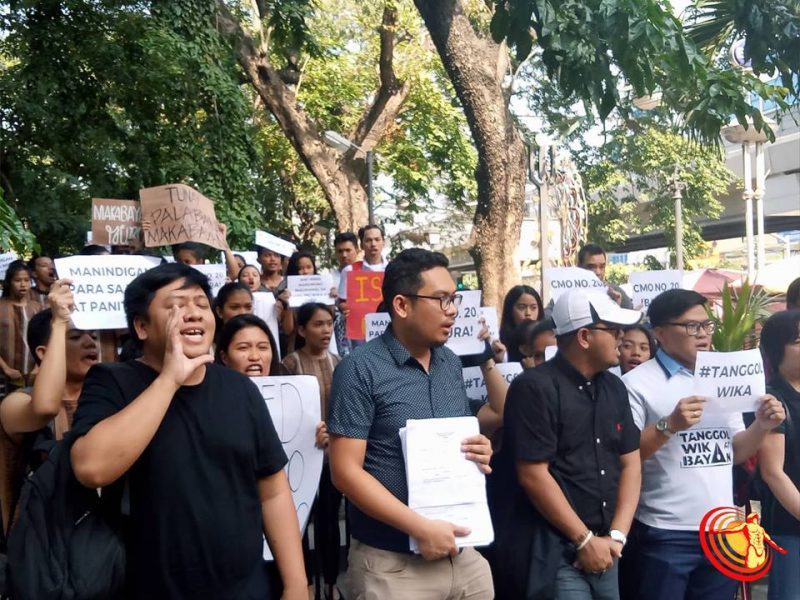 Tanggol Wika members marched to the Supreme Court to file motions for reconsideration on the removal of Filipino in the college curriculum. Photo by the Manila Collegian used with permission.

A statement by the University of the Philippines Diliman University Council calls for the preservation and development of Filipino and Panitikan in college:

We believe that Filipino language and literature is vital in deepening the critical, creative, free, and liberating capacities of students and people, whatever their courses, disciplines, and fields of expertise. The study of language and literature in college is no duplication but an expansion of theory, practice, and its usage in the university, the nation, and life.

An online petition has also been recently initiated by the national university's Department of Filipino and Philippine Literatures. Here are some of the comments written by the online petitioners at change.org:

Carol Marcelo: No one would love her own language if not us Filipinos hence it is only right that we enrich this through active usage and recognition of its being our soul even from before.

Rommel Rodriguez: The continued teaching of the Filipino language and Philippine literature up to college is important because it is part of the molding of a nationalist consciousness and Filipino aspirations of our students.

Memes have also sprung online poking fun at CHED and the Duterte government and calling for the preservation of Filipino and Panitikan in college: 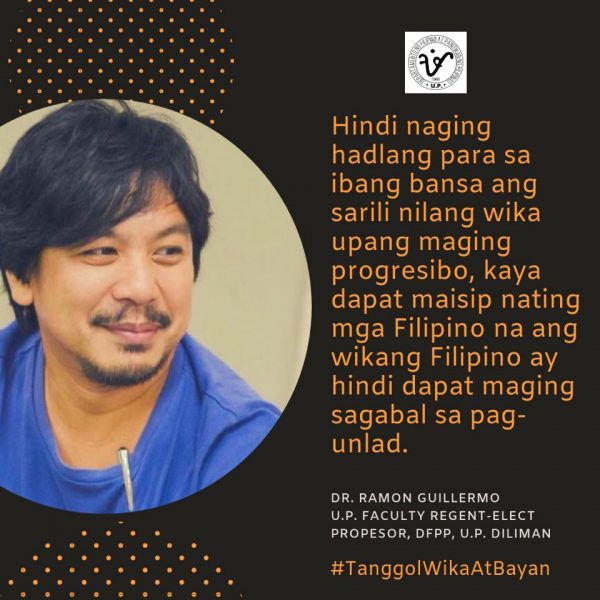 Other nations’ own languages did not become a hindrance for them to become progressive, hence we Filipinos should not think that the Filipino language will become an obstruction to development. 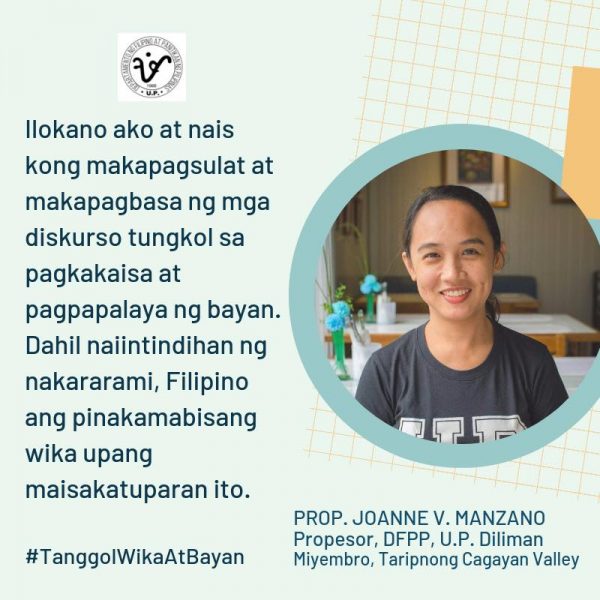 I am an Ilokano and I like to write and read of the discourses of national unity and liberation. Because it is understood by the majority, Filipino is the most effective language to attain this. 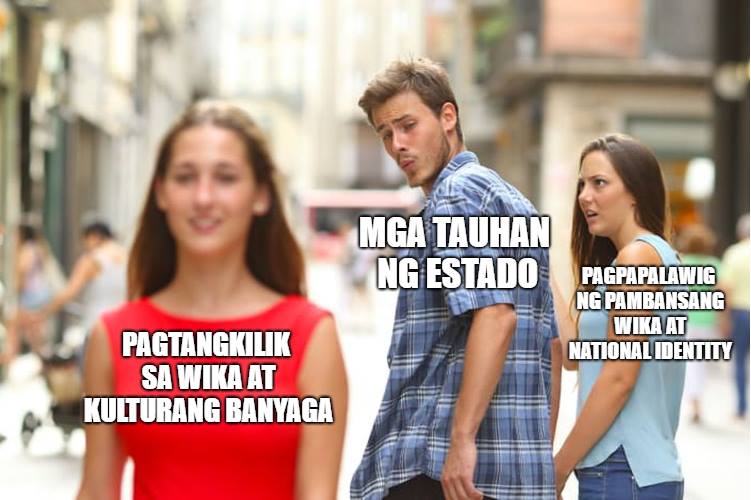 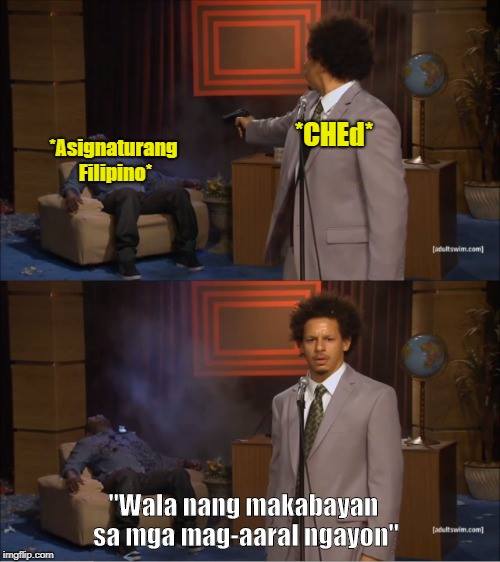 Disclosure: The author works as an instructor at the University of the Philippines Diliman, Department of Filipino and Philippine Literature, which is actively involved in the #TanggolWikaAtBayan campaign.