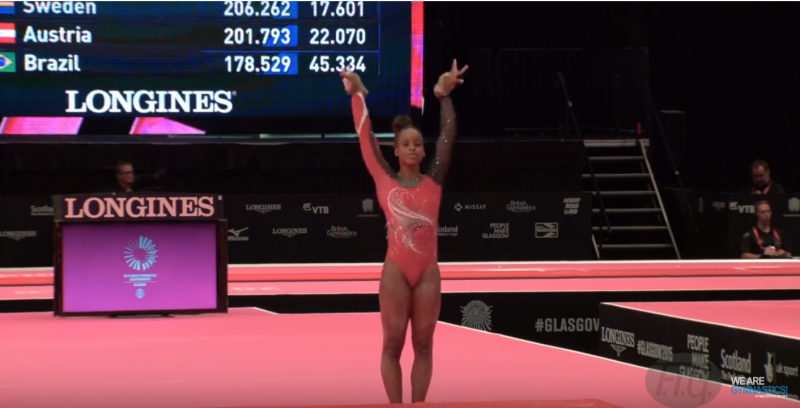 A screenshot taken from a YouTube video showing Trinidad and Tobago gymnast Thema Williams as she begins her floor routine during the 2015 World Artistic Gymnastics Championships.

When people talk sports in Trinidad and Tobago, football or cricket typically dominate the conversation — but in February 2016, all anyone could talk about was gymnastics. The Rio 2016 Olympic Games were close at hand, and then 20-year-old gymnast Thema Williams was widely considered to be the country's best hope in the sport — until things began to unravel.

As Williams was preparing for the final qualifier for the Olympic Games, a topless Instagram photograph she posted more than a year prior was brought to the attention of the Trinidad and Tobago Gymnastics Federation (TTGF). And suddenly, Marisa Dick, a Canadian-born gymnast whose mother is Trinidadian, was vying for the Caribbean nation's single Women’s Artistic Gymnastics spot in the Rio Olympics instead of Williams.

In the end, the TTGF pulled Williams as the country’s representative, citing alleged substandard performances in her training.

The whole fiasco had more twists and turns than a gymnastics routine, but many believe that Williams’ forced withdrawal was illegal and her attorneys have been fighting for justice ever since.

On November 26, 2018, Williams was vindicated, winning her lawsuit against the TTGF. High court judge Frank Seepersad ruled that the decision to replace Williams at the Olympic test event was “biased” and “premature”, explaining that the TTGF failed to verify claims that Williams was injured before sending a substitute.

However, Williams’ financial award was significantly less than she requested, as the judge said there was no evidence of the loss of promotional and scholarship opportunities that may have resulted from Williams’ Olympic appearances. She did receive an award of $150,000 Trinidad and Tobago dollars (approximately US $22,250) in exemplary damages for the loss of her chance to represent her country at the Olympic Games, as well as for the anguish she experienced as a result of the controversy.

Interestingly, while the judge ruled that former TTGF president David Marquez, his vice-president Akil Wattley, and board members Ricardo and Donna Lue Shue held a bias against Williams, he did not hold them liable in their personal capacities due to lack of evidence of a conspiracy.

While some social media users were pleased that Williams won her legal battle, others, like Facebook user Janelle Barker, felt that the settlement was too paltry:

This rulings [sic] shows up the incompetence by so-called big lawyers. So they didn’t know they had to justify the compensation they asking for … that amount is lawyer fees only, waste the girl damn time. The population should sue the gymnastics federation for not sending the best person to represent us … I’m so upset.

[…] the psychological wounds of this injustice will take quite some time to heal. I am skeptical to say congratulations but I will definitely send her blessings for peace and success as she continues to excel as the best T&T gymnast.

But Keith Scotland, one of Williams’ attorneys, believed that justice had been served, noting that the suit was “never about the money … this was always about the process and the principle.”

In an ironic twist, the TTGF displayed apparent disregard for both process and principle when the officials who were named in Williams’ lawsuit attempted to argue that the gymnast should pay their legal bills. On December 3, Judge Seepersad promptly dismissed their claim.

The TTGF was roundly criticised on online platforms thereafter, with many Facebook users echoing the statement of the judge:

The second to fifth defendants are rather fortunate that they were shielded from personal liability primarily because they acted in their capacity as bona fide members of the first defendant. However, their conduct was unacceptable and should be accompanied by a sense of shame.