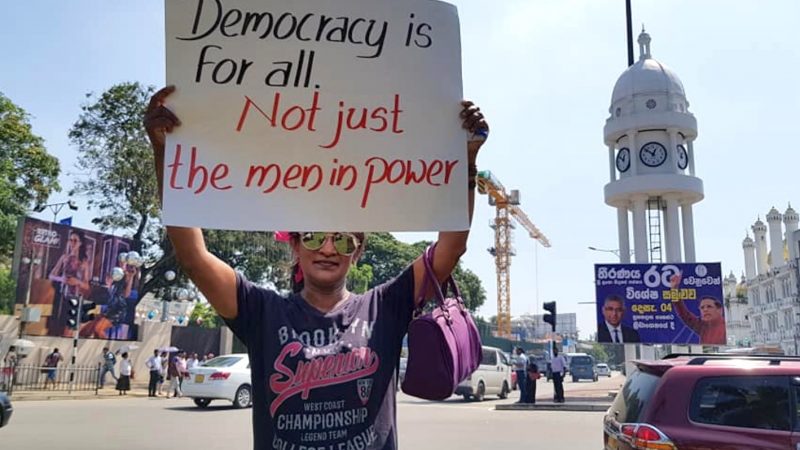 The power struggle between ousted Sri Lankan Prime Minister Wickremesinghe and the newly appointed Prime Minister Rajapaksa has reached a new level. On 3 December 2018, a Sri Lankan Appeals Court issued an interim injunction restraining Rajapaksa from his office as prime minister until the petition challenging his appointment is heard.

Ousted Prime Minister Ranil Wickremasinghe and 121 other Parliamentarians went to court last month seeking a writ of Quo Warranto, which would require Rajapaksa to show what authority empowers him to exercise the office of prime minister. They declared that Mahinda Rajapaksa was not entitled to hold the office despite the fact that President Maithripala Sirisena rejected two no-confidence motions against Rajapaksa.

The Appeal Court issues an interim injunction restraining PM Mahinda Rajapaksa & the Cabinet functioning until the petition is heard.Also issues notices for the 49 member Cabinet, including PM,to appear before courts on Dec.12 for the hearing of petition#ConsititutionalCrisisLK

#Srilanka: The damage that may be caused by temporarily restraining a lawful cabinet from functioning would in all probability be outweighed by the damage caused by allowing a set of persons not entitled in law to function as PM/ministers, said Judge Surasena #lka @the_hindu

Many Sri Lankans rejoiced at the verdict:

What a difference it can make to a country when its courts function, and when they are efficient! ? Biggest victory thanks to #CoupLK : and if they stand right to the end, I would think its worth this struggle & coup. Some shake ups/messes, leads to greater good! #SriLanka #LKA

The last several weeks has seen a vibrant judiciary in action-not only the higher courts but also the original courts- in public law cases as well as criminal cases. It is a proud moment for all those who value the Rule of Law and the Independence of the Judiciary in our country

Rajapaksa tweeted that he would go to the Supreme Court to challenge the verdict. In another statement, he called for an early election to settle the battle, confident in his chances because his party swept the local elections in February 2018.

“We do not agree with the decision given by the Appeals Court as Constitutional matters are finally decided by the Supreme Court. We will be filing an appeal tomorrow.” pic.twitter.com/g6im1auDsJ

Patali Champika Ranawaka, ex-Minister of Megapolis & Western Development in Sri Lanka, lashed out at Rajapaksa's call for an election:

Mahinda Rajapaksa need not keep on issuing statements and asking for General Elections to resolve this crisis, which they themselves created. Just resign your Illegitimate Premiership! A five minute job! @PresRajapaksa #lka #srilanka

As the process to decide which PM will ultimately hold office drags on, citizens are still protesting:

At Rise Up #Negombo we spoke to a group of young seminarians all under 20 years. We asked them why they came. They had just one answer – “Because of our love for our country”.#RiseUpSL pic.twitter.com/8c5BSZ6h5f

Women march under the rain, unfurling a long saree that becomes a banner with democratic slogans. #CoupLK pic.twitter.com/KSSxSeValf

Rohan Samarajiva terms this crisis in Sri Lanka a head-on collision between Constitutionalism and Feudalism. In a blog he writes:

It appears that the political elite’s dalliance with Constitutionalism has about run its course, sixty years after Independence. We are reverting to our native Feudalism: not just the ruling family but large swaths of the populace, including opinion leaders and intellectuals.

Sarmini Serasinghe calls all Sri Lankans to rise up before it's too late.

The time has come for each and every citizen of Sri Lanka, irrespective of social and professional status, to rise in peace and defend the sacred institution of Democracy in our country before it’s too late. It’s our right and moral duty as its citizens.

Meanwhile, practical questions have begun to arise — like how to refer to Rajapaksa:

This post indicates the #Sinhala, #Tamil & #English press reportage from 01 – 03 December on reference to the post held by Mahinda Rajapaksa. Several newspapers continued to identify #Rajapaksa as the PM. What do you think? #CoupLK pic.twitter.com/RD7klhQ7C4

After parliament passed a NCM on Nov. 14, on Nov 16, Speaker published an official statement that the motion was passed & the cabinet was dissolved. Is it suitable for newspapers to continue referring to #Rajapaksa as PM? #CoupLK #mediaethicsSL #SinhalaPress pic.twitter.com/2sgSLghQFS