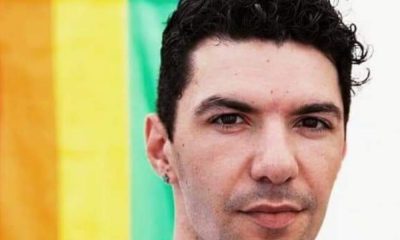 On September 21, well-known Greek LGBTQI activist Zak Kostopoulos was lynched in Athens in a case that shocked and divided Greek society, and whose repercussions are still being felt.

The case first became known to the public through a series of three citizen videos [trigger warning: disturbing content] showing a man being beaten up by two others on Gladstone Street in Omonoia Square as he attempted to escape from a jewellery store. His identity at that point was unknown. One of the videos shows two police officers kicking and then handcuffing the victim as he lied unconscious on a pool of blood on the ground.

One day after the videos circulated, the man's identity was released: he was Zacharias Kostopoulos, 33, better known as Zak or Zackie Oh, an LGBTQI and HIV-positive activist, writer, and drag queen.

While the two perpetrators — the jeweller himself and a neighbouring shopkeeper — were arrested soon thereafter, the revelation of Zak's identity turned out to be a pivotal moment in the story — it unleashed both overwhelming demands for justice from LGBTQI communities from across the country, as well as hate speech against such communities and Zak himself.

Inflaming that hate speech, in particular, was Greek mainstream media, who portrayed Zak as a “junkie robber” and the perpetrators as the victims who were merely trying to protect their businesses.

For example, while the media reported the cause of death as “undetermined“, the initial forensic notes actually said “cannot be determined yet” — meaning that a definite conclusion could only be made after the histological and toxicological exams had been cleared.

The “junkie” narrative was echoed by many on social media, where it latched on homophobic views as well. In September, journalist and author Vassilis Kasimatis posted on Facebook an opinion that resonates with that of many other Greeks:

Zak Kostopoulos. FROM A CRIMINAL ROBBER… [to a] A HERO!!
[…]
The fact that this tramp Zak was gay should not influence our judgement. Because we subconsciously target again the gay community for no real reason. Same with the unscrupulous gay parades. The only aim of SYRIZA [the ruling political party] is to provoke hatred among the people. The fact that they have appointed an openly declared homosexual as director of the Anti-racist Violence Department, who makes casually unacceptable announcements (such as the latest solidarity call with the robber Zak) serves the same purpose. (He must be moved IMMEDIATELY!!)
[…]
A gay man (Zak) did the felony of robbery. The jeweller rightly defended himself. End of story. Enough.
I want to believe that the “landlord” will be fully acquitted in court and all will end up there.
Do not wonder if they make a statue to Zak as they did with Pavlos Fyssas [an antifascist Greek rapper murdered in 2013].
[…]

Meanwhile, the investigation into Zak's murder was fraught with delays and shortcomings.

Besides the apparent use of excessive force on a person who was unconscious, police officers failed to collect evidence from the crime scene in time, nor did they obtain testimony from eyewitnesses — the owner even managed to tidy up the store afterwards.

All police practices say the same thing. They are going to an incident where they have to deal with an armed and running amok person. That's what they know; nothing else. In order to be handcuffed and not to injure a passing citizen or himself, the practice is the same. Take it or leave it.

The attitude of National Emergency Center's staff was also questioned — one video shows two EKAB men standing aside as the police kick the victim.

On November 20, the final postmortem's results were released: Zak has suffered ischemic-type myocardial lesions due to the multiple injuries in his body, which caused intense stimulation and consequently his death. The results of the toxicology tests were also clear.

But Faye Karavasili made a reflection on her Facebook page: what if the victim was a “junkie”?

So, there goes the “junkie robber” theory.
His tox screen was clean and he died as a direct result of the lynching he received. He didn't overdose. He didn't catch a cold.
But that is not the scary part. What really scares me is the need for the side of the victim to prove they were a “good guy” after all, as if “bad guys”” and “junkies” and “petty criminals”, none of which was the case for Zak, can have their rights revoked and their lives removed without due process or trial by any crowd at any time. I know that if I didn't know him, maybe I wouldn't have been so vested into finding out what happened to him. All the same, I refuse to live in a society that justifies the mob killing of a weakened man of less than 50 kg in the middle of the day in the middle of Athens at the hands of a crowd. If that really were a junkie, we would not be having this conversation now and it is a bloody crucial conversation to have. You can't both love law and order AND applaud such suspension of BOTH. You can't complain about the violence if you are the one justifying it or inflicting it directly. Every day, Greece disgusts me more. 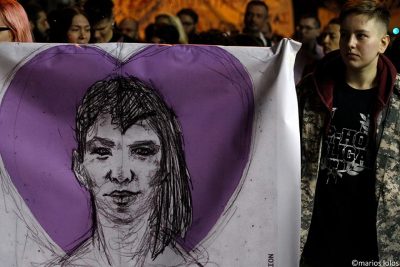 A moment from a protest dedicated to Zak Kostopoulos in Athens, October 2, 2018. Photo by FB public timeline of photojournalist Marios Lolos. Used with permission.

On October 2, LGBTQI organisations, anti-racist collectives and non-parliamentary left-wing organisations held a mass protest in central Athens. On October 6, activists visited the President of the Hellenic Parliament and filed a petition demanding the case to be investigated. Soon afterwards, the attorney general opened an investigation of a possible racist motive behind the murder of Zak Kostopoulos.

Over 200 Greek journalists and photographers signed a statement critiquing the sensational and accusatory way Greek media covered the story. Dozens of artists have also signed an open letter demanding clarification of the circumstances under which Zak lost his life.

About a month after the incident, Zak's mother, Eleni Kostopoulou, sent a letter to Prime Minister Alexis Tsipras calling for the “fair punishment” of those who participated in the murder of her son. The Prime Minister replied two days later saying that her loss shall not be forgotten by those who are committed to the struggle for a society where human life is the ultimate value.

On November 20, the International Transgender Day of Remembrance, a 2011 speech by Zak was screened for a mass gathering in Athens. Afterwards, the participants marched towards the Greek Parliament while holding candles. A similar event was also held in Thessaloniki.

The Forensic Architecture Research Center has announced its support to Zak's family and for this reason, it has established an exclusive platform for the collection of audiovisual material about his case, and submission of content can be made anonymously.

A volunteer initiative, Justice 4 Zak/Zackie, was also set up to bring justice to Zak Kostopoulos.

Zak's Facebook profile, which is now a memorialised account, is flooded with thousands of messages of solidarity.