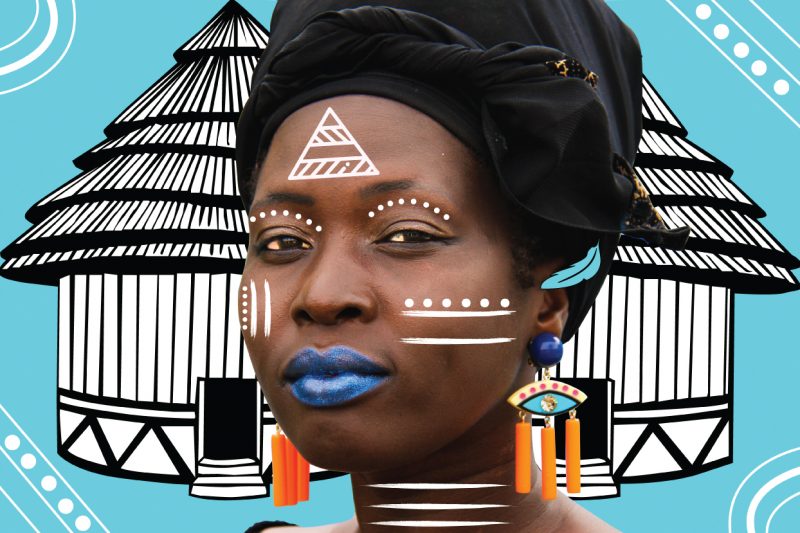 A man named Gatluak is probably feeling a bit embarrassed as South Sudanese singer Nyaruach calls him out for being a “boring man with no plan” in a hit song shared widely since its release in June 2018. Or, rather several Gatluaks — the name is common in South Sudan and “all know a Gatluak [who behaves this way]”, Nyaruach says.

With fierce feminist messaging, Nyaruach's playful song reclaims a woman's dignity after getting burned in love. It also reminds the world that vibrant music and art emerge out of Kakuma Refugee Camp in northern Kenya, one of the largest refugee camps in the region.

Nyaruach, a single mother of two who lives in Kakuma, told Global Voices during a Skype interview:

The catchy song and music video, which features some of Nyaruach's Kakuma co-residents, released in November 2018, caught the world's attention for its hypnotic Afro-beats and bold lyrics.

Ladies… there is nothing worse than a boring man, with no plan ?. Gatluak pick up your phone ?!? ???? New video and album with my brother @emmanueljal out now. Click on my bio ☝? Naath Album | Gatluak #southsudan #afropop #afrobeats #wewantpeace… https://t.co/jClCIZhH9Y

Gatluak bought her cold drinks, they went on long walks, and then ghosted her! “You refuse to pick my phone after you get what you want. You are such a bastard guy, I just want to say goodbye! May God bless you where you are. You boring man — with no plan. With no plan!” sings Nyaruach.

“Gatluak” is the second release on the album NAATH (“humans” in Nuer) produced by Nyaruach and her brother Emmanuel Jal, a hip-hop artist who gained notoriety after his autobiography, “War Child: A Child Soldier's Story”, was published in 2009. As children, the siblings were forced apart through extreme circumstances.

The two draw on Nuer traditional folk and love songs and interlace them with addictive dance beats. “We can’t forget our culture”, Nyaruach said. “We have to remind the new generation about the past — and music makes people happy.”

Nyaruach and Jal named the album NAATH after the “glorious Kingdom of Kush” of the Nile as an antidote to images of war and poverty that have characterized South Sudan. A long road to music

Nyaruach was born in 1983 in Tonj, Sudan and separated from her family at the age of four when her mother died. Her brother Jal was taken as a child by the Sudan People’s Liberation Army and forced to fight. He was then taken to Kenya at the age of 11 with the help of a British aid worker who was married to then-senior SPLA commander Riek Machar. There he discovered hip-hop, which he used to encourage peace.

Nyaruach's life took a different turn. She spent several tumultuous years with relatives and ran away from an abusive father at the age of 10, surviving several arduous escapes from Sudan, first to Ethiopia and later, to Kenya.

South Sudan gained independence from Sudan in July 2011, after a 22-year long civil war (1983-2005). The peace did not last long despite major investments in South Sudan's development. In 2013, armed conflict broke out in Juba, the capital of South Sudan. This spread to other areas of the country, gradually turning into an inter-ethnic conflict between the country’s two largest ethnic groups: the Dinka, represented by President Salva Kiir Mayardit, and the Nuer, represented by then-Vice President Riek Machar.

Nyaruach did not reunite with Jal until they met in Nairobi. They collaborated on a song called Gua, or “peace” in the Nuer language. She was 22. The song was a hit in Kenya in 2005 and a breakthrough song for Jal, who went on to become an award-winning musician and peace activist.

In 2015, Nyaruach traveled to South Sudan for a short visit. Upon her return, she spoke out against the violence she witnessed. Pregnant with her second child, she decided to shift to Kakuma, seeking security.

Kakuma Refugee Camp was originally established by the UNHCR in 1992 to host 20,000 Sudanese children and youth known later as the “Lost Boys of Sudan” fleeing violence during the Second Sudanese Civil War.

Today, over 56 percent of the population of Kakuma and neighboring Kalobeyei settlement are from South Sudan. At the end of January 2018, the camps hosted a total of 185,449 registered refugees and asylum-seekers.

Nyaruach said that living in a refugee camp is especially hard on women with children.

They give us firewood for a month, it finishes after seven days. We need to eat our meal, we wake up at 4 a.m. to steal. Yes, we have to steal it — and it's very dangerous. They rape us, they can even shoot and kill us. But we can't report. Who is going to report? We have no voice or authority.

Enduring years of hardship has taken at toll on Nyaruach's spirit. Reuniting and making music with Jal has felt like salvation. “I have a heart of singing”, says Nyaruach. “Jal taught me how to rhyme.”

‘Woman have no rights’

Nyaruach's song uplifts women and girls in South Sudan who she says have “no rights, no matter how young you are” in a recent interview with Kenya's The Star.

South Sudanese women are among the most marginalized, and the conflict has made conditions untenable. More than 80 percent of those who have fled the violence in South Sudan are women and children.

This is my life now in Kakuma refugee camp. ??We have almost no womens rights or basic human rights now in South Sudan and I want to use my music to celebrate the magic of women from our country. ? For all the pledgers who have supported our upcoming album release NAATH you will receive some ⭐️special updates from my life in Kakuma today and learn more about my situation. Thanks for all your support ?? please listen to our music and walk with us by following the link in my bio ?? #blackgirlmagic #blacklivesmatter #refugees #southsudan #wewantpeace @gatwitch @jalgua @jalguacafe

South Sudan has gone through several rounds of failed and fragile peace negotiations, but data shows that women have been far less involved than men in the peace process, despite research that suggests including women at higher levels would improve stability.

Machar returned to South Sudan in October 2018 after two years in exile in South Africa to work with Kiir, but many are wary of the peace deal after five years of protracted conflict.

“Women in South Sudan have been treated by government soldiers and armed actors, including local militias, as spoils of the conflict”, UN investigators said in September 2018. “The plight of South Sudan’s women and girls should no longer be ignored”, they said — referring to disturbing testimonies of rape victims.

According to a 2017 survey issued by the International Rescue Committee and Global Women’s Institute, 65 percent of South Sudanese women interviewed had experienced physical or sexual violence.

Nyaruach has her own testimony.

[South Sudanese] men's ideas are changing about love. They get married to many wives and then destroy our lives. They fail to take care of their children properly. They rape us, use young girls, get us pregnant and leave us.”

Nyaruach says music is her calling. “If I hide what is killing me in my heart, what can I do to make a change?” she asks.

No wonder “Gatluak” is a hit. This is Nyaruach's chance to demand the men in her life to do better, not just in love but war — and peace.