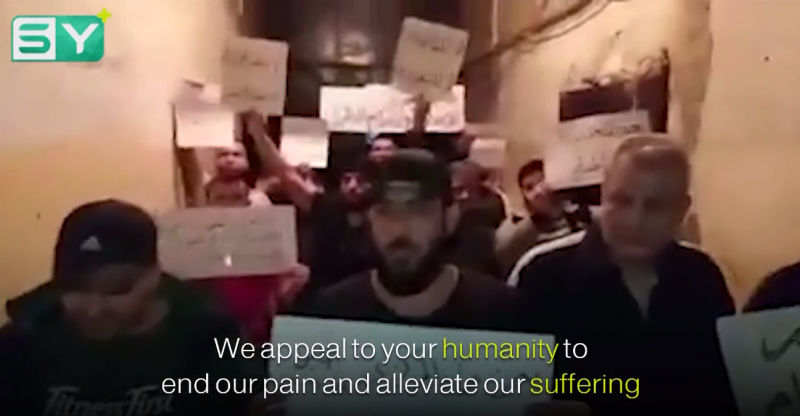 Two weeks ago, on Monday, November 12, 2018, in a short leaked video recording, Syrian prisoners of conscience sent a message to fellow Syrians and the world from within the confines of Hama Central Prison (HCP).

Their message is clear — they are going on a hunger strike.

In the foreground, three men who identify themselves as a Christian, an Alawite and a Sunni stand together to deliver the bold message.

In the background, several detainees stand holding signs that say “yes to pluralism and secularism” and rejecting sectarianism and populism. Others hold signs appealing to the world and human rights organizations who have turned a blind eye to their suffering.

The three leaders read a statement calling on Syrians of all sects and backgrounds and the world to recognize their pain and alleviate their suffering:

We've been languishing for years in the whirlpools of detention cells, we inhale agony and exhale moans. We have a right to live and for our issue to be taken seriously.

This hunger strike is an effort to protest their unjust detentions, arbitrary sentencing, and make their voices heard.

This appeal comes after Feras Dunia — a judge assigned by the Military Field Court — along with other government officials delivered an order that 11 of the detainees be transferred to Saydnaya Prison. A total of 68 — with minors among them — are to appear before the Military Field Court for trials with assurances that they will not receive harsh sentences.

The detainees, however, described these assurances as “empty promises”.

Saydnaya has been dubbed by Amnesty International a “human slaughterhouse” where the Syrian regime sends prisoners to be executed. Amnesty has estimated that nearly 13,000 people have died while in custody or were extrajudicially executed in Saydnaya between March 2011 and December 2015.

Knowing very well what awaits them in Saydnaya, the detainees refused Dunia's request to deliver their fellow inmates and demanded detailed information on what sentences they had received.

The majority of the 260 prisoners of conscience held at HCP were detained by the Syrian regime in the early days of the Syrian revolution in 2011 and 2012.

They describe themselves as peaceful protestors who had done nothing wrong except for “chanting for freedom” according to heartfelt testimonies in this leaked audio recording.

When Global Voices spoke to one of the detainees via a phone app, he explained:

I had no political or partisan background, I just had a dream of a different Syria, so I joined the ranks of my fellow Syrians who took to the streets in peaceful protests, we did not carry arms. Our dream was a difficult one to attain.

Hama Central Prison fell under prisoners’ control in May of 2016, following a riot sparked by the execution of two detainees who were transferred to Saydnaya to await trial — and then executed. The families of those two detainees informed fellow inmates what had happened, and the remaining prisoners started rioting to prevent the authorities from transferring four other inmates scheduled for transfer to Saydnaya.

The government attempted to take back control of the prison during the early days of the disobedience, conducting raids by Syria's Air Force Intelligence Directorate — notorious for its brutality.

But media coverage during this time put pressure on Russia, who intervened and guaranteed that there would be no further attempts to raid the prison and that the Syrian government would work to reach a settlement to meet the prisoners’ demands.

A small portion of Syria’s prisoners of conscience end up held for various reasons in civilian prisons such as HCP. The majority are taken to military prisons or secret detention centers used by various security branches. It is estimated by the Syrian Network for Human Rights that no less than 95 thousand individuals are forcibly disappeared, 85% of which at the hands of the Syrian regime.

“Only sheer luck,” one currently imprisoned individual at HCP said when asked how he had ended up in a civilian prison:

When they were done with me after four months of torture and interrogation, all the military prisons were full, so I ended up here.

Despite the difficult circumstances inside HCP, it is not representative of the reality most Syrian prisoners experience. Another HCP prisoner described the conditions inside the detention centers as even worse — “a real holocaust”:

The real tragedy isn’t here, the real tragedy is the prisoners who are kept under the ground, who cannot tell day from night, who die each day a thousand deaths, who are being tortured and mutilated every day. I do not know what to tell you, even Caesar photos are a small portion of the reality. For those prisoners, they wish for death, because death is a lot more merciful than their suffering.

For many years, Syrian prisoners of conscience have been neglected by the international community. This detainee asks with heightened urgency:

Where is this world that claims to be civilized? Where are human rights bodies? Where is the United Nations? Where is everyone? The world’s conscience, where is it?