How fake news and misinformation are stirring ethnic tensions in Afghanistan 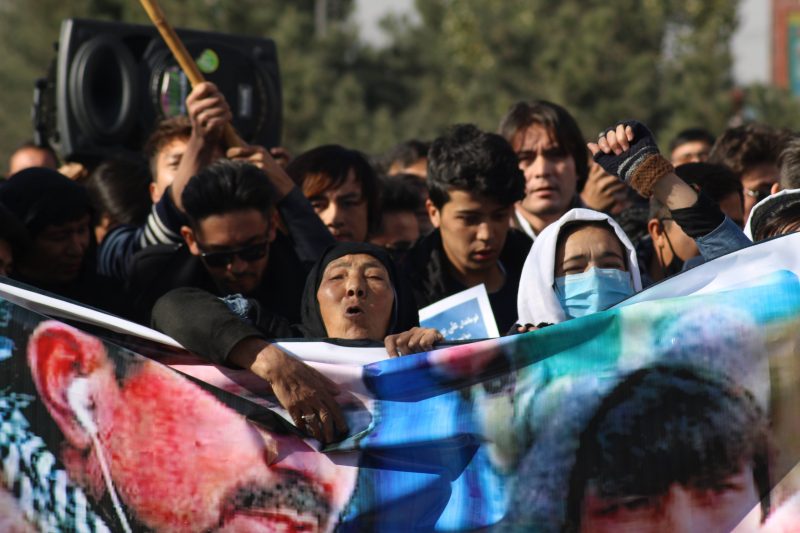 Demonstrators in Kabul protesting the arrest of commander Alipoor. Photo by Mustafa Hasani for Hushdar News Agency. Used with permission.

On November 25, hundreds of Hazara demonstrators took the streets of Daykundi, Bamiyan, Mazar-e Sharif, Herat, Ghor and Kabul to protest against the arrest of the militia commander Alipoor, whose forces have been fighting Taliban militants across central Afghanistan.

The protest came after the government failed to respond quickly to deadly attacks launched by Taliban militants on three districts populated by the minority.

In an interview, Alipoor, who is branded a “criminal” by his critics and a “people's defender” by supporters, said:

When the government fails to protect and defend people, it's our natural right to defend ourselves. People voted for them and supported them to run the government, so they can enforce the law and run a strong administration, but they failed. Nobody is feeling safe. When there is no security, then there is no government. We need justice, security and stability so that people can live their lives. For this reason such a government, that is not able to guarantee its own security, cannot ask me why I am armed.

Alipoor was released from custody on November 26, but only after the protest in Kabul had already turned violent. Afghan officials said dozens of police were wounded by rocks and some police checkpoints were burned. Alipoor's arrest was ordered by the country's Attorney General.

A video published November 26 by Etilaatroz, one of Afghanistan's most important newspapers, shows policemen appearing to shoot into a crowd of unarmed protestors.

The deputy interior minister claimed no-one was killed during the protest even as gory photos of protesters shot in the head and young school girls killed circulated online.

At least four people were killed in Kabul according to multiple media accounts, with 22 wounded. In Bamiyan, seven people were reported killed.

After the demonstration, more than 80 people were arrested, among them girls and children aged between 8 and 16.

Alipoor’s case has divided the Afghan public. This strong polarization of opinions mirrors the social, political and ethnic fragmentation which is deepening in Afghanistan against a background of everyday insecurity.

Such a setting offers fertile conditions for misinformation to sprout and intensify inter-group hate speech.

As anti-Hazara sentiment surge in #Afghanistan, journalists, former governors, & individuals have taken to Twitter to show how protestors beat up policemen. The truth is the image circulating around is fake. It belongs to Wakil Kohsar and was taken in 2016, 2 years ago. pic.twitter.com/3oKyhUFATb

At a meeting with Afghan vice-president Sarwar Danish on November 24, National Directorate of Security chief Massoum Stanekzai said that Alipoor was arrested by the Americans and then handed over to Afghan intelligence.

After this information began to circulate online, a spokesman for US forces in the country took to Twitter to deny any involvement in the case on Washington's part.

A number of social media users indicated that the service had used a Reuters photo from 2016 to illustrate an article about this month's protests. The photo shows injured policeman being transported by a military vehicle and was taken after a bombing in Kabul.

This is a clear exampe of how @DaRadioAzadi Afghan section Internationaly try to ignite ethnic clashes and create hatred among #government and #Citizens.The reporter has used used photos from past police casualties to show they were injured by protesters today. #Fake Reports pic.twitter.com/lzVw9xtAXK

In an online environment characterised by bitter vitriol, humour is an antidote.

The massive spread of fake news on the back of the Alipoor protests pushed some users to turn to creative irony:

Scientists believe the latest protest organized in Kabul has increased the level of air pollution and is the main cause of this year's drought in northwestern AFG. When asked how, scientists blamed Iran for providing Hazaras with unknown sophisticated techs.#RadioFakeNews