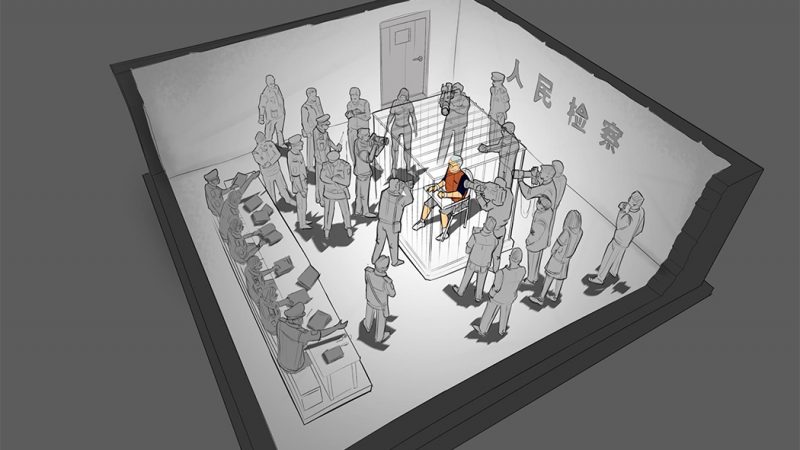 The following post was written by Kris Cheng and published on Hong Kong Free Press on November 23, 2018. The republication is based on a partnership agreement.

A British fraud investigator has filed a complaint with the UK's telecommunications authority against China Central Television (CCTV) for having helped to stage a forced confession in 2013 and 2014.

In 2013 and again in 2014, Peter Humphrey, a former Reuters journalist, was forced to confess on Chinese TV for crimes he had not committed, in an ordeal he says “will forever haunt him.”

Humphrey and his wife were hired by pharmaceutical giant GlaxoSmithKline to conduct an internal probe in the company's Chinese headquarters in January 2013. In July that year, Humphrey and Yu were detained and charged with “illegally acquiring personal information” of Chinese nationals.

Humphrey was forced to make confessions on state television in August 2013 and again in July 2014. Humphrey and Yu stood trial in August 2014 and were sentenced to 30 and 24 months in jail respectively. They were released in June 2015 following diplomatic pressure.

On November 23, 2018, he filed a complaint with the UK's Office of Communications (Ofcom) in an attempt to revoke the UK license and credentials of CCTV and its international arm CGTN. If the complaint is upheld, China’s state broadcaster will be kicked out of the UK.

In his complaint, Humphrey says:

They drugged me, locked me to a tiger chair, and placed me and the chair inside a small metal cage. China Central Television journalists then aimed their cameras at me and recorded me supposedly reading out the answers already prepared for me by the police.

The complaint was filed mere weeks before's CCTV's opening of its European hub in Chiswick Park in London. It will be CCTV’s largest foreign bureau, reportedly with plans to base more than 300 staff.

He told HKFP three years after he was released from:

I continue to suffer from nightmares, flashbacks and bouts of depression over my ordeal, my entire family’s ordeal. The forced TV appearance [in] the cage is a trauma that will never leave me. I just have to learn how to manage my trauma.

This action is one of a number of actions that I intend to take focused upon the illegal acts perpetrated against me and my family by the Shanghai regime, against certain individuals who played criminal roles in our persecution, victimisation, unlawful imprisonment, and material damage.

Humphrey is being assisted by Swedish activist Peter Dahlin, the director of Safeguard Defenders, which aims to fight against this practice. Dahlin was also forced to confess on CCTV in January 2016 on a separate matter.

Mr. Humphrey has a strong argument for why the complaint should be accepted… If it is, there is literally no situation or interpretation where CCTV will not be found to have grossly violated the broadcasting code.

He said the request to strip CCTV’s license was based on the Office of Communication's broadcasting code and a past case from 2009. In that year, Iran’s PressTV broadcast a confession on UK airwaves by the then-jailed Iranian-Canadian journalist Maziar Bahari.

Bahari filed a complaint to Office of Communications and in 2011 PressTV lost its license to broadcast in the U.K.

Humphrey hopes that the ombudsman “will take it seriously in order to defend British laws, regulations, and values from a fake news outlet complicit in human rights crimes.” He added:

The upholding of the complaint and sanctions against CCTV in the UK would send a strong signal to Beijing and would alert the world to the dangers posed by [CCTV]. A denial of the complaint would be a dark day for democracy, for the rule of law and for human rights.

This experience and struggle does not diminish my love for the Chinese people and their culture after 43 years of involvement with China. The Chinese people deserve better governance than they have today.