On contemporary art in the Balkans: An interview with Jon Blackwood 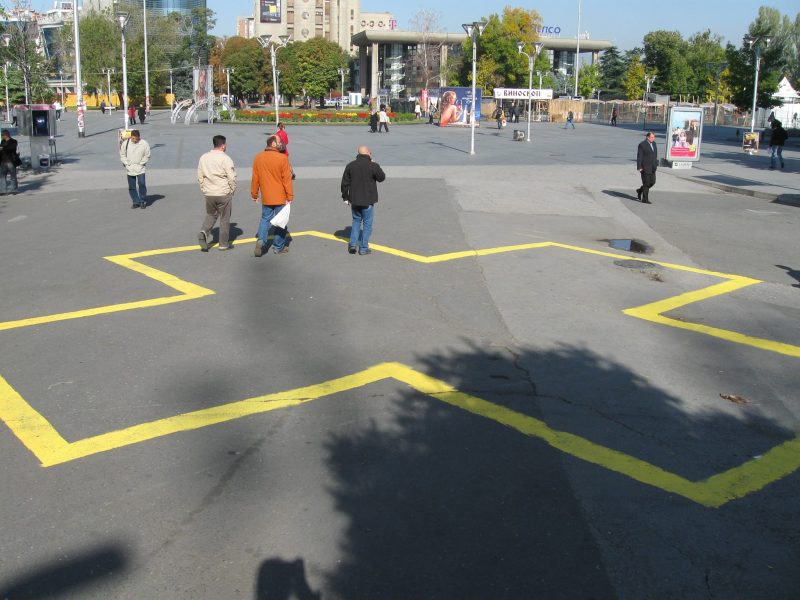 Jon Blackwood is a curator of contemporary art, writer and lecturer at Gray’s School of Art, Robert Gordon University in Aberdeen. He divides his time between Scotland and the Balkans, researching contemporary art in the ex-Yugoslav space, in particular in Macedonia and Bosnia and Herzegovina. His book Critical Art in Contemporary Macedonia (2016) is the first in-depth study of the contemporary alternative art scene in Macedonia in English.

In his interview with Global Voices, Blackwood explains his quest as an art researcher and his efforts to connect the different parts of Europe by challenging stereotypes about the Balkan region:

Filip Stojanovski (FS): How does the “Western” art world perceive the ex-Yugoslav or the wider Balkan art world? 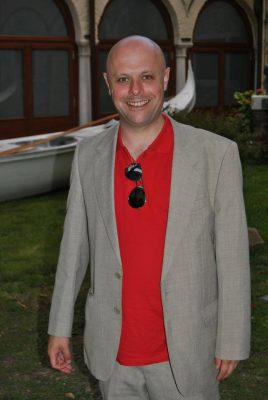 Jon Blackwood (JB): It’s hard to give a definitive answer to this one. I don’t really think the old binaries of “West” and “East” are helpful anymore, for as the Cold War period recedes into history these binaries mean less and less. Probably a more useful distinction is “the EU” and “the Rest of Europe”.

There are small, very dedicated groups of scholars from Scotland, England, France, Germany, Austria and North America who are very active in the ex-Yugoslav region in the field of visual culture. Beyond that, I am afraid there is still a lot of misunderstanding and ignorance generally.

In terms of the art world, interest has grown a little in the last few years. I started working intensively on the art history of Yugoslavia, and the post-Yugoslav contemporary art worlds around 2006 simply because I had been challenged by what I had seen, and equally baffled by the almost complete lack of English language material on it. This has begun to shift decisively in the last decade.

For example, in the last two to three years, the Tate has established a Russia and Eastern Europe Acquisitions Committee and is beginning to show names like Braco Dimitrijević from Bosnia-Herzegovina, and Sanja Iveković from Croatia, regularly in its permanent displays.  MOMA’s extraordinary contemporary show of Yugoslav architecture also shows they are now really paying attention to the region. There are other players like calvert22 in London, and Nottingham Contemporary in the East Midlands, that also continue the long-standing, but rather sporadic UK interest in Yugoslav art which started in the early twentieth century with the work of Ivan Meštrović.

FS: What challenges do you face as a researcher who is not actually based in the Balkans, and needs the information in English?

JB: English language sites like Global Voices, Meta.mk, and Balkanist, as well as independent journalists like Vladimir Petreski on Twitter, are critical to researchers like me in the Balkan region. Only a few international newspapers offered serious coverage of the political and diplomatic personalities involved in the protests and political upheavals in Macedonia from 2015 to 2017.

Only in times of extreme crisis, such as the Kosova situation from 1999-2001, are Macedonian affairs covered seriously. I am also convinced that the journalistic coverage in our newspapers was because of increased diplomatic involvement from the US/EU in resolving the political deadlock of 2016 to 2017 and in the focus on the terrible conditions facing many migrant people as they passed through Macedonia, rather than a serious interest in internal Macedonian affairs.

FS: What are the main findings of your research in the ex-Yugoslav space?

JB: I suppose the big surprise for me when I first started working in the region was how much Yugoslavia still existed culturally at some levels, even if it was long finished politically and legally. Back in the 2000s, there was still some sense of a Yugoslav cultural space: People in Skopje were interested in novels published in Ljubljana and artists in Split and Dubrovnik were interested in hearing about what was going on in Novi Sad. In 2018, I’m afraid that this is no longer so much the case.

In Macedonia, as you know, the system for cultural funding and the cultural infrastructure is largely unchanged from Yugoslav times — just it subsists on about one-fiftieth of the money that it did before 1991. In the parts of ex-Yugoslavia still outside the EU, I have the sense that institutions, although they exist, have (with a few exceptions) ceased long ago to fulfill the functions they were established for.

The result is that artists have had to establish their own cultural infrastructures and ecosystems in response to the failure of these institutions and try to make work in that way. It's also true to say that Belgrade has a thriving self-organised art scene which subsists on minimal public funds topped up with grants from bigger international cultural funds and some embassies. 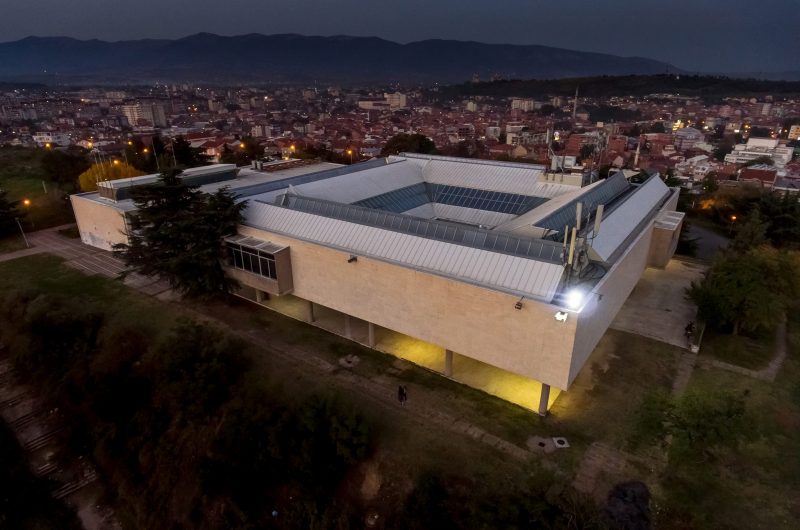 Obsessive Possessive Aggression, ContraContraBeacon, 2016. Copyright the Artists. OPA used Morse code, with a light mounted on the roof of the Gallery of Contemporary Art in Skopje, to deliver a subliminal political message during times of political crisis and deadlock in Macedonia.

FS: What are top priorities in regard to enabling the development of art in the region?

JB: The biggest problem I think in the different republics of ex-Yugoslavia is the loss of an engaged audience. The audience for contemporary art has been eaten away through the linked processes of conflict, impoverishment, destruction of working conditions for the working and middles classes, a marked decline in education standards, economic polarisation, migration/exile, and the anti-intellectual, ahistorical politics of ethnic nationalism. When so many citizens have to focus so much of their effort on just survival, it’s little surprise that people have lost the habit of going to art galleries or taking an interest in other cultural manifestations such as theater, dance, or ballet.

In any case, the contemporary artist, wherever she or he is from, is obliged to be a nomad. High-profile artists always manage to work on projects abroad whilst remaining rooted in the communities that they grew up in. There are examples of this from all across the former Yugoslav space and, in this way, these artists are working in exactly the same way as their counterparts globally.

However, this is a very small minority of active artists; most either are obliged to take a non-art job soon after graduating from the Academy and do their work in what spare time they have or give up altogether due to lack of opportunity. With a lack of a functioning domestic market, it is more important than ever that young graduates from the non-EU Western Balkans are prepared as much as possible for the expectations of differing EU and global marketplaces and how to access them effectively.

If future governments in the region wish to help grow and encourage younger artists, then even a small fund enabling them to travel to make a show internationally or make a short study trip relevant to their practice would be a huge step forward. Small money spent on an initiative like this could potentially deliver major results in the years ahead, from young people whose talents may be lost altogether to art. Cultural tourism is becoming a multi-million dollar business in Europe but it can never thrive without a healthy grassroots and cultural infrastructure.

FS: How has your work been received in the different parts of Europe that you have been covering?

JB: People like me have to be aware of what a delicate position we are in, in ex-Yugoslav countries. In my case, initially, I didn’t speak any local language or know much beyond general information about the territory that I had decided to enter, and this took time, effort and serious engagement to overcome. Many are weary of people like me coming to countries like Bosnia, Serbia, or Macedonia, promising the earth and then disappearing, having done little more than write another line on the CV. So initially there was a little suspicion of motivation, and ironic encouragement, I suppose.

Response to work completed has been largely favorable. My work has been based largely on personal contact and discussion, with archive and library work where appropriate. My book Critical Art in Contemporary Macedonia, published in 2016, has attracted a lot of informal comment, much of it very positive. Of course, there are always questions about the line-up of artists and curators that one chooses to work with and talk about, but that’s only to be expected with such a project.

I suppose the biggest pleasure I have had is in showing work by contemporary artists from the region in Scotland. I curated a show of contemporary video art from Macedonia at Gray’s School of Art, where I work now, and then a show by six Bosnian women video artists in Perth, in 2017. 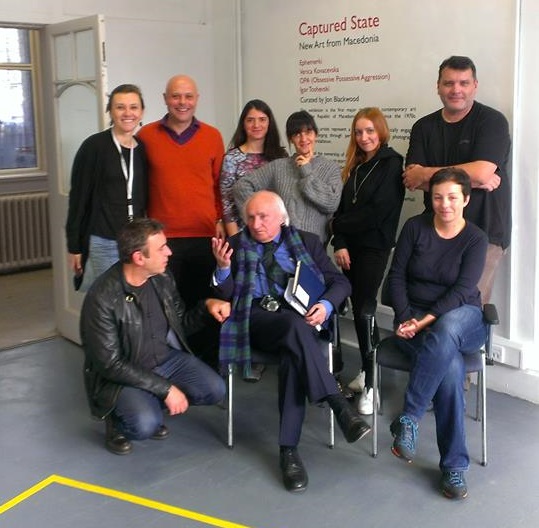 Jon Blackwood (back row, second from left) with the Macedonian artists who took part in the exhibition “Captured State” at Summerhall in Edinburgh, in 2017, with Richard Demarco, founder of Summerhall.

In 2018, people’s eyes are very jaded in such a hyper-visual world and artists and curators have to fight much harder than ever to maintain the audience’s attention. Introducing the likes of Igor Toshevski, OPA, Ephemerki, and Verica Kovacevska to an Edinburgh audience for the first time was a great experience and it has sharpened people’s interests in the region, generally.

This was the exhibition Captured State at Summerhall in Edinburgh and I will work with the same space for another show, this time from Bosnia-Herzegovina, in 2020- we are just starting on that one now. 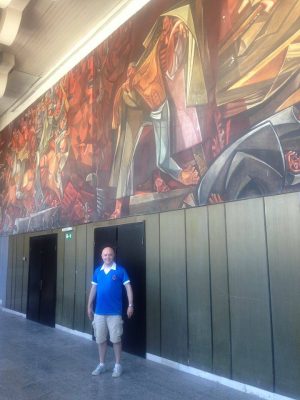 Jon Blackwood pictured at the Marko Cepenkov Cultural Centre in Prilep, with Borko Lazeski's re-worked National Liberation Struggle fresco. The fresco was completed in 1990-91 and is a replica of the work lost at Skopje railway station during the tragic earthquake of 26 July 1963.

2019 will be a big year for my work on Macedonian art, I suppose, as a number of projects I have been working for a while, on will come to fruition. I will produce an introductory book in English on the work of the legendary Macedonian modernist and fresco painter Borko Lazeski (1917-1993) who is one of my artistic heroes from the region. With the help of the Scottish Funding Council’s Global Challenges Research Fund, I have had two wonderful summers researching his work and I hope to do that justice in the text I will write, and to help raise Borko’s profile to the international level his inspiring drawings, frescoes and paintings deserve.

In the summer of 2019, I will mount an exhibition of three young Macedonian artists in Aberdeen, as part of a new exchange programme between Macedonia and Scotland. I hope to offer young curators in Macedonia the opportunity to work with three young Scottish artists later in the year, in Skopje. I am really excited now that these projects are at the point of fruition.