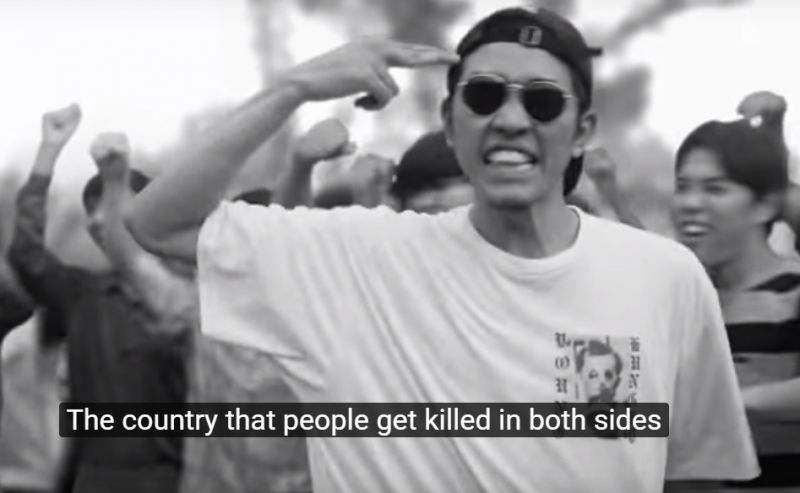 This part of the music video refers to the violence directed against critics of the Thai military and the frequent clashes between supporters of political parties. Screenshot of YouTube video.

A rap music video criticizing the military-led government of Thailand has gone viral despite threats by authorities to investigate the artists behind the popular song which was denounced by the prime minister as “inappropriate”.

Released on October 22, the five-minute music video “Prathet Ku Mi” (What's My Country Got) by the group “Rap Against Dictatorship” garnered 600,000 YouTube views in just two days. As of this writing, it has over 40 million views.

The group of 10 rappers, with some of whom preferring to remain anonymous, collectively wrote the song which criticizes state violence, government corruption, and ongoing military rule.

Led by General Prayuth Chan-ocha, the army staged a coup in Thailand in 2014. A new constitution was drafted ensuring that the military continues to dominate the state's bureaucracy even if civilian rule is restored. Prayuth announced that elections will be held next year, but the government has imposed several restrictions on political campaigning.

The rap group was praised for their bravery and creativity in depicting the country’s situation. Below are screenshots of some parts of the music video: 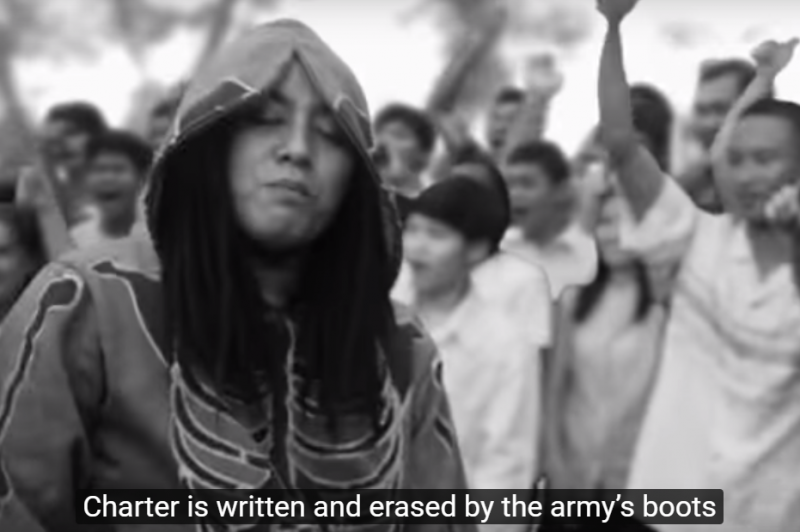 This refers to the 2016 constitution which supposedly would facilitate the country's transition to democracy but it only reinforced the dominance of the military. Screenshot of YouTube video.

This part of the music video refers to the army coup in 2014 and the continuing military dictatorship in Thailand. Screenshot of YouTube video. 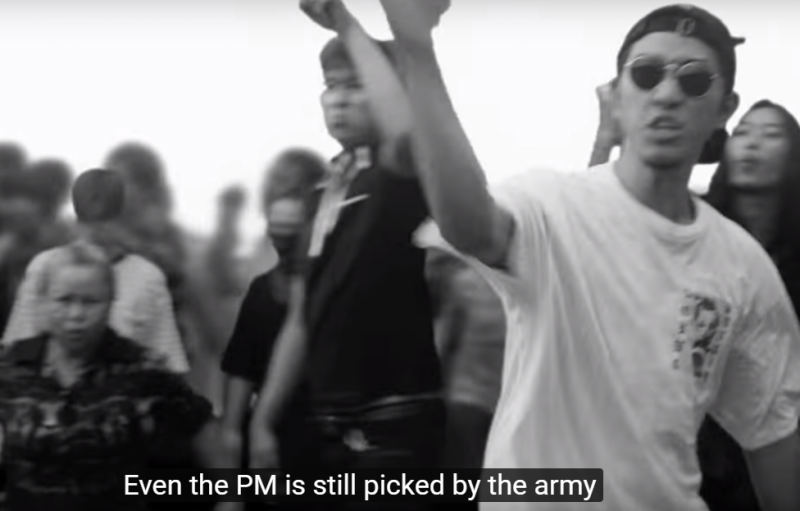 Prime Minister Prayuth was the army chief who led the military coup in 2014. Screenshot of YouTube video

The background features a group of people who appear to be cheering for something. Near the end of the video, it's revealed that it actually refers to the mob and paramilitary forces that attacked and killed dozens of Thammasat University students who were protesting against military rule in 1976.

The music video recreates one of the brutal scenes of the Thammasat University massacre in 1976. Screenshot of YouTube video

Asked about the decision to include the brutal tree-hanging massacre at Thammasat University in the video, and whether this glorifies violence, director Teerawat Rujintham explained in an interview with Prachatai website that:

Sometimes we also have to present violence using a straightforward method, so that people will feel and see certain truths.

Society that lives under fear and self-censorship doesn’t work. If we believe in something, we must be brave enough to fight and take a stand for it.

Thai authorities led by Prayut criticized the song for “disrespecting” the country and police chiefs threatened to investigate the rap group and charge whoever promotes the song in social media. So far, no arrests have been ordered.

Instead, the government launched its own rap song celebrating innovation and progress, but it failed to generate buzz on social media.

It is possible that the Prayut government, sensing the popularity of the song among young people, is being careful not to further inflame public sentiment at a time when it is trying to get the support of voters.

Indeed, many Thai netizens and leaders of various political groups have expressed support to the rappers:

I always say soft power like music and literature is a critical force to push the society towards progressive future. Rap Against Dictatorship has done a great job with #ประเทศกูมี. They show the world that we Thais do not surrender to the Junta’s rule. https://t.co/Z0QkDurDlS

In an interview with Coconuts news website, “Rap Against Dictatorship” responded to critics who accused them of tainting the global image of Thailand:

To the people who say we’re ‘ruining Thailand’s reputation’, I ask what looks worse: turning a blind eye on the problems that everyone already knows about anyway or recognising our problems and starting a conversation to look for solutions?