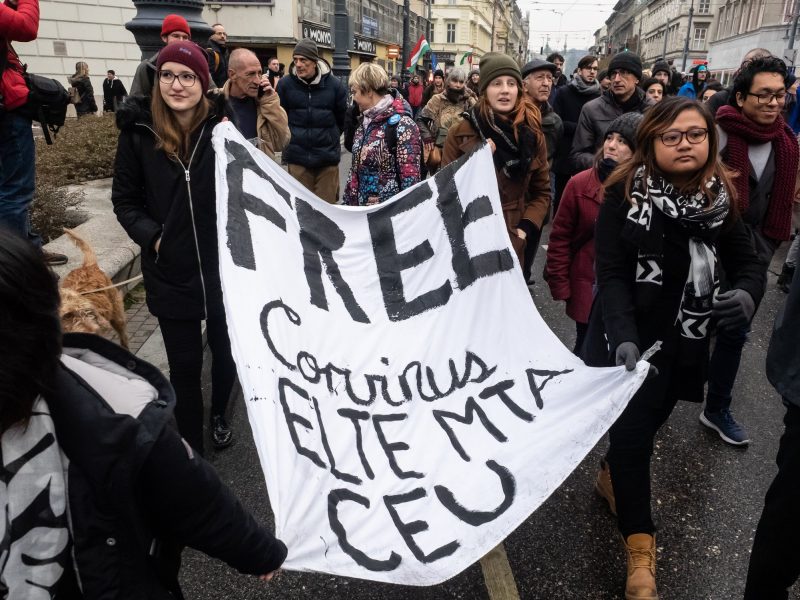 Students in Budapest protest with a banner with the acronyms of academic institutions under threat in Hungary “Free Corvinus, ELTE, MTA, CEU.” Photo credit: Anna Vörös. Used with permission.

NOTE: The author of this article is a Central European University (CEU) graduate student. Global Voices is a grantee of the Open Society Foundations, which is funded by George Soros.

This week marks the last and final call for Central European University (CEU), a private university founded in 1991 by financier and philanthropist George Soros, to stay in Hungary. The institution, which has been located in Budapest since 1993, has been in legal limbo since April 2017 when a controversial amendment to Hungary's existing higher education laws was passed by the government.

Students organised a protest on Saturday 24 November, and occupied the main square in front of the Parliament in Budapest to defend academic freedom in the country.

In late October, Michael Ignatieff, CEU's president and rector, announced that the institution was not going to wait until January 1, 2019, for the government to sign off on the document that would secure the university's place as a Hungarian-American academic institution in Hungary. The Central European University instead gave the Hungarian government a new deadline of December 1, 2018, and started establishing a campus in neighboring Austria's capital, Vienna where first-year students would transfer for the 2019 academic year.

The university is bracing itself for the move to another country. “University” in this case means all the people affected by the move, including students, PhD students, researchers, professors, and staff, some of whom have been working at the CEU in Budapest for more than a decade.

In Hungarian academic circles, the conversation in the past weeks has been dominated by the topic of academic freedom. Budapest's Corvinus University is facing a reform that would organize the university's activities according to more of a profit-making structure, and drastically curb the number of state-sponsored students. At the same time, ELTE University's Department of Social Sciences went on strike and sparked discussion of Gender Studies as a result of the closing of the programme. In addition, the Hungarian Academy of Sciences is fighting budget cuts announced by the Hungarian government.

Students, researchers, professors, and their allies rallied on Saturday to call attention to the struggle for academic freedom in Hungary. According to media reports, the rally attracted thousands, and speakers at the event represented ELTE, Corvinus, CEU and the Hungarian Academy of Sciences.

Protesters marching through #Budapest now in support of #CEU, the Soros-funded university that Orban seems determined to force out of #Hungary. pic.twitter.com/ppsZCvB2oU

Speakers addressed the issue of academic freedom and the April 2017 law which forces CEU into exile and also called for solidarity with workers since the announcement last week of a new law that exposes workers to exploitation through overtime. The list of problematic regulations looks endless in Hungary, and the speakers, many of whom are social scientists, also criticized the amendment of the Basic Law (Constitution) that criminalizes homelessness in the country.

Speakers and protesters did not miss the opportunity to criticize Hungarian Prime Minister Viktor Orbán for giving asylum to former Macedonian prime minister Nikola Gruevski, a fugitive from the law who was sentenced in his own country to two years in prison on corruption charges. 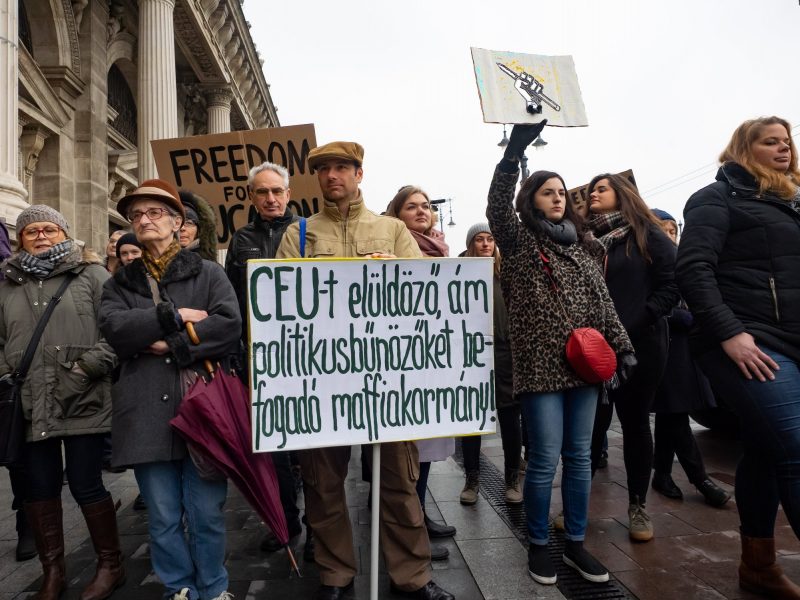 As the closing of Saturday's march, the Students4CEU student movement occupied Kossuth Square in front of the Parliament under the banner “Free University”. Students are celebrating academic freedom with open lectures and screenings throughout the week.

It’s cold. It’s raining. But we’re not leaving until the Hungarian gov stops its attacks on academic freedom. Join us starting tomorrow at 11 for lectures, film screenings & discussion at our very own #SzabadEgyetem (free university) pic.twitter.com/hB2anmZjKA

The occupation of Kossuth Square will end on December 1. For Central European University to remain fully based in Budapest, this is the last and final call.