After a bloody attack on an opposition leader, critics of the Serbian regime express fears of a descent into fascism 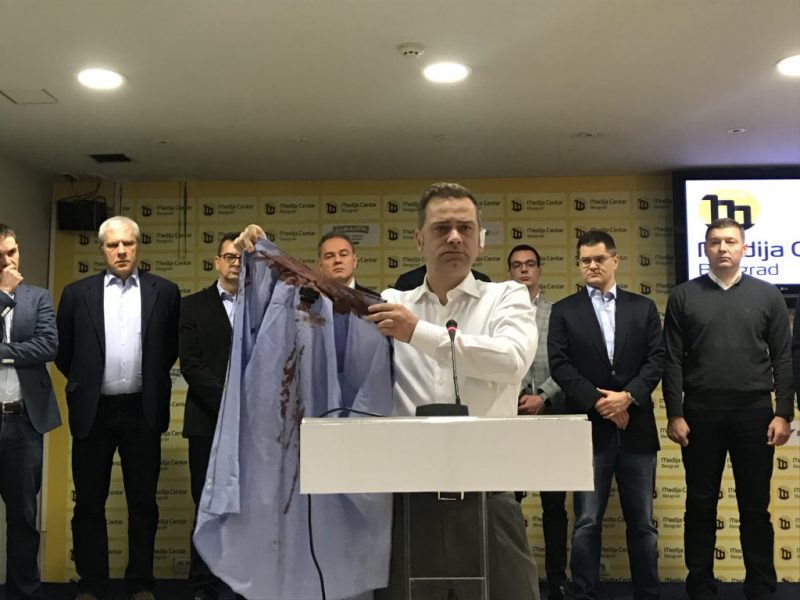 On the evening of Friday November 23, 2018, a group of masked thugs armed with bats and steel bars attacked Borko Stefanović, the president of the political party Serbian Left and a founder of opposition coalition Alliance for Serbia.

According to news site Istinomer Vesti, the masked thugs also brutally beat two Serbian Left party activists. Boban Jovanović ended up with two broken teeth and a cut lip, while Marko Dimić suffered numerous blows to the head. All three had to be taken to hospital for emergency care. Stefanović and the party activists were scheduled to attend a political event in the city of Kruševac in Central Serbia.

According to a statement released by Serban Left:

“A group of attackers armed with rods intercepted Stefanović in front of Local Community Rasadnik in Kruševac, pinned him to the asphalt and brutally beat him. After Jovanović and Dimić tried to aid him, the attackers assailed them as well.”

On learning about the attack, opposition members and other netizens took to social media to alert the public about the situation. In particular, they shared photos from the crime scene. Former mayor of Belgrade Dragan Djilas tweeted:

According to Srđan Milivojević of the Democratic Party (DS), the event which Stefanović and the activists were supposed to attend was a regularly scheduled public forum of the Alliance for Serbia, attended by its leaders, so the attack also targeted members of the Dveri movement, the DS, the People's Party and other member parties. Milivojević told Danas daily that three more people were injured in the attack.

The Alliance for Serbia blamed the attack on their members, saying it was a consequence of the smear campaign being perpetrated by the regime of President Aleksandar Vučić against his political opponents on a daily basis.

The following night the Serbian police announced that they had arrested two suspects identified only by their initials and ages—M.Ž. (30) and D.G. (31). The suspects will be detained for 48 hours, after which they will be taken to the relevant prosecutor's office where appropriate criminal charges will be laid.

Even before the police had made their announcement, however, President Vučić held a press conference breaking the news about the arrest of the attackers. “The state reacted urgently and did its job, showing that Serbia is not a banana republic in which you can hit anyone for any reason,” Vučić said, adding that he did not have the right to demand a more rigorous sentence, as this would constitute interference in the independence of the judiciary.

At a press conference held by the Alliance for Serbia on Saturday morning Borko Stefanović, who appeared wearing a bandage, stated that the incident should be considered attempted murder, as the attackers intentionally hit him on the back of his head with metal bars, and then kicked him in the head with their boots. “It was all premeditated and organized,” he said.

At the conference, Stefanović showed the bloodied shirt he was wearing at the time of the violent attack. Expressing gratitude for the numerous expressions of support from colleagues and collaborators, he stated that “We will fight to ensure that Serbia doesn't remain a country of bloody shirts, and a country where the blood of those who think differently from the regime is spilled.”

Many Serbian social media users viewed the attack as an indication of the country's descent into open fascism. Comparing the situation with the trajectory of the Nazi party in Germany, renowned film director Srđan Dragojević tweeted that “we are entering 1936,” a period of the intertwining of party and state.

When some people warned that this is fascism, you just laughed at them.

Others shared similar comparisons, alluding to the start of the Nazi's purges of compatriots they designated as undesirable:

Four men with metal bars attacked Borko Stefanović. They can't use arguments, so they move to physical liquidation. A Crystal Night has descended on Serbia.

During the 1990s, current Serbian president Aleksandar Vučić used to serve as Minister of Information in the government of dictator Slobodan Milošević. Comparisons between two regimes were also abundant.

The difference between the regimes of Slobodan Milošević and Aleksandar Vučić is that Milošević used the police and state security to deal with people who disagreed with him. Vučić surrounded himself with criminals, football hooligans and various fake patriots and hoodlums of all kinds. The opposition must acknowledge that, and once for all take off the ‘white gloves.’

At the Saturday press conference, Borko Stefanović echoed some of this discourse. “We have to deal with this together! They stalk in from the darkness. While we are together, they won't be able to attack in such a fascist, cowardly manner, from the back,” he said.