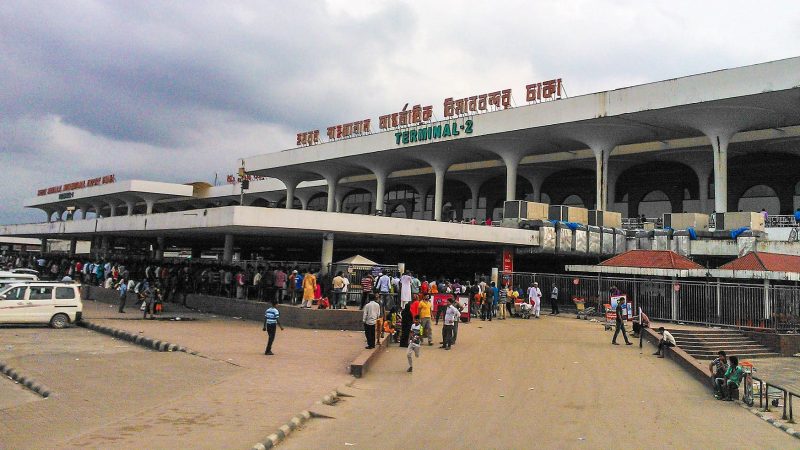 If it has been a few years since you have flown through the Hazrat Shahjalal International Airport in Dhaka, Bangladesh, you may notice that a lot has changed. Stories of endless waiting for lost luggage [2] have been replaced with customers receiving their bags [3] at home, and goods being stolen from passengers has become a minor issue. This is thanks, in part, to innovative efforts from executive magistrate Muhammad Yusuf at the Dhaka Airport Magistrate Court, who along with others in his department have begun using YouTube and Facebook to decrease crime and help passengers in Bangladesh's biggest airport.

In 2014, the facilities at the Hazrat Shahjalal Airport were so poor and improperly managed that it was ranked [4] one of the worst airports in Asia. However, along with the efforts of other departments, the Dhaka Airport Magistrate Court and two of its executive magistrates, Muhammad Yusuf and Sharif Muhammed Forhad Hossain, took up the challenge to bring about change.

They launched a Facebook page titled Magistrates, All Airports of Bangladesh [5] featuring helplines in December 2014 to gather complaints from the passengers or anyone who used the airport. The magistrates became harsh with airlines who overbooked passengers [6] and offloaded passengers after they had already completed check-in and immigration process. They conducted mobile courts to punish the airport staffs and contractors who engaged in passenger harassment, baggage cutting, stealing from luggage or illegal money extortion from the passengers. According to reports [7], the incidents of harassment, irregularities, and crimes in the airport area decreased significantly in the following years.

After Sharif Muhammed Forhad Hossain was transferred, Muhammad Yusuf [8] took up the reigns. He introduced initiatives like “Give The Waste, Take The Money [9]” which minimized passenger littering. Yusuf also created a library [10] in the airport, punishing airport staff for mistakes by making them read books and later testing their knowledge on what they read. The initiative, called “Project TukiTaki [11] (little things)”, is explained in detail in his YouTube video:

According to Yusuf, this has reduced the rate of crimes [10]:

To many staffs, reading books is an extra pressure for them. Seeing the books in their hands their colleagues are becoming aware that they have made some mistake (misbehaved or asked money for service). Their family members know that he is being punished for doing something wrong.

Helping passengers one video at a time

Yusuf's latest project is aimed at informing passengers and the public about different rules, regulations, and tips via a YouTube channel [12]. One of the most harassed communities in the airport is the migrant laborers from Bangladesh.  [13]They are not usually aware of the rules and regulations regarding what they can bring without duty,  how they can complain and retrieve their lost luggage (or insurance money), how much currency can be carried/brought, who needs to produce the manpower clearance card during exit, what to do if they miss a flight etc.

In various short videos via the Youtube channel [12], he shares information with passengers in the Bengali language — including useful facts and answering queries submitted in the Magistrates, All Airports of Bangladesh  [5]and his own profile page [8].

In the following videos, Yusuf explains basic concepts about getting to a gate on time, dealing with missed flights etc:

In the next video, he explains the difference between reissuable tickets and one-time tickets, premium vs low-cost carriers, and missed flights and no-shows:

According to the International migration report 2017 [14] published by the UN, there are more than 7 million migrant workers [15] from Bangladesh working abroad in almost all the continents of the world. They send remittance to their families back home which is a lifeline of the economy of Bangladesh. Some travel abroad for work without the registration and clearance from the Bureau of Manpower, Employment and Training (BMET [16]) and later they fail to get government support when they are in trouble in a foreign land. Without the clearance, the immigration officers disallow such persons from leaving the land. To be aware of such rules and the benefits of the BMET card, he uploaded two videos. Here is an example:

It has been only a few months since Yusuf started this YouTube channel and, thus far, he has uploaded more than 30 videos. The videos have been warmly received by audience members who have benefitted from this much-needed information in the local language, and support of this initiative seems to be taking off — just recently his channel reached 57k followers.