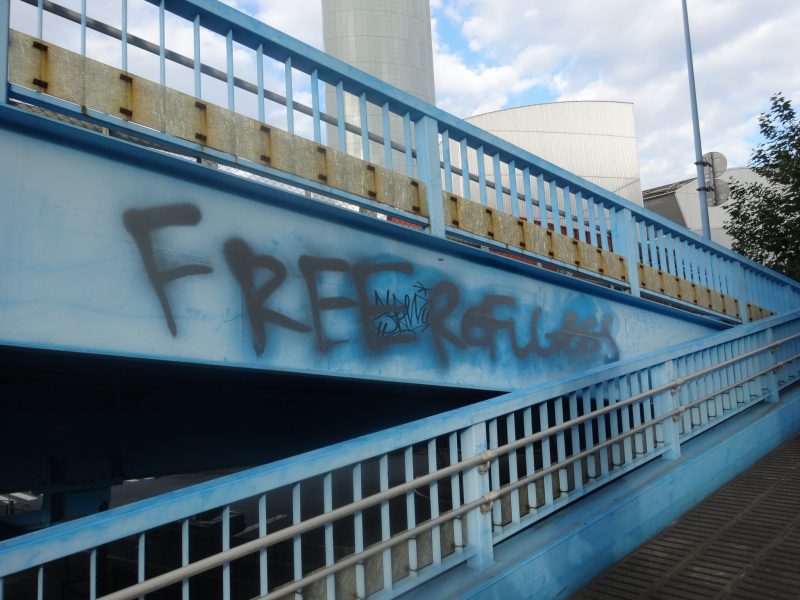 On November 20, the official Twitter account of the Tokyo Immigration Bureau sparked an online discussion after pinning a tweet to its Twitter profile featuring graffiti on a bridge in central Tokyo. Although the tweet was intended to speak out against graffiti, what actually caught netizen interest was the message of the graffiti itself. The words read “Free Refugees”, which many understood as tacit criticism of how the official immigration body treats refugees, undocumented workers, and others in detention.

The pinned tweet by the Tokyo Immigration Bureau includes three photos of graffiti written on the bridge with the words “FREE REFUGEES”, along with a message imploring everyone to “stop making graffiti” (落書きは止めましょう):

Found early in the morning on November 19, on the Konan Bridget. While freedom of expression is extremely important, this is public property.

Doesn't this just make you a little sad?

Japan accepts very few refugees and asylum seekers each year. In 2017, Japan granted refugee status to just 20 out of 19,629 applicants. Asylum seekers are often detained or separated from their families while awaiting a decision about their status.

Criticism of Japan's policy towards immigration detainees is nothing new. Since 2006, fourteen inmates have died in Japanese immigration detention facilities which add up to about one person per year on average. Four of the most recent deaths have been suicides. The focal point for protests by Japanese human rights activists has centered around the East Japan Immigration Center in Ushiku, Ibaraki prefecture because of the high rates of detainee death.

The Tokyo Immigration Bureau also gained notoriety in October for participating in a television program that turned migrant raids and deportations into entertainment.

You can always erase graffiti and return things to normal, but a life lost can never come back.

In a tweet shared hundreds of times, Nagoya-based scholar Hibi Yoshitaka called out the Tokyo Immigration Bureau for seemingly criticizing graffiti that in turn criticized the bureau's terrible track record on human rights:

Cloaking their true intentions and pretending to self-righteously tut-tut graffiti, even going so far as to pin the tweet to their profile page. Of course graffiti is wrong, but what about the abuse of detainees?

In his subsequent Twitter thread, Hibi went on to share a link to a variety of books and articles that explained the dire conditions for immigration detainees in Japan, including a November 5, 2018 Tokyo Shimbun article that details how 17 detainees were detained in a cell meant for 6 for 24 hours at an Osaka immigration detention facility.

Hibi also shared an article by a news organization in Nagano prefecture that explained how Japan's immigration authorities are increasingly resorting to more punitive measures such as long-term confinement to control detainees, and that the practice of detaining visa-overstayers is unofficially intended to act as a deterrent to others.

Another popular reply to the Tokyo Immigration Bureau's pinned tweet includes a link to a May 2018 news article by journalist Shiba Rei that describes conditions for Turkish-Kurd refugee claimants in detention in Japan:

Is the Tokyo Immigration Bureau completed oblivious to protests about its violation of human rights? While graffiti is wrong, it's important to recognize a violent (immigration system) that results in suicide.

Japan intends to dramatically increase the number of temporary foreign trainees in the coming years. However, since these trainees work for reduced wages, often in precarious conditions, many will likely be tempted to flee their jobs and work under the table, violating the terms of their visa.

This means many more people will likely be trapped in Japan's immigration detention system — detained for long periods of time and possibly risking death.