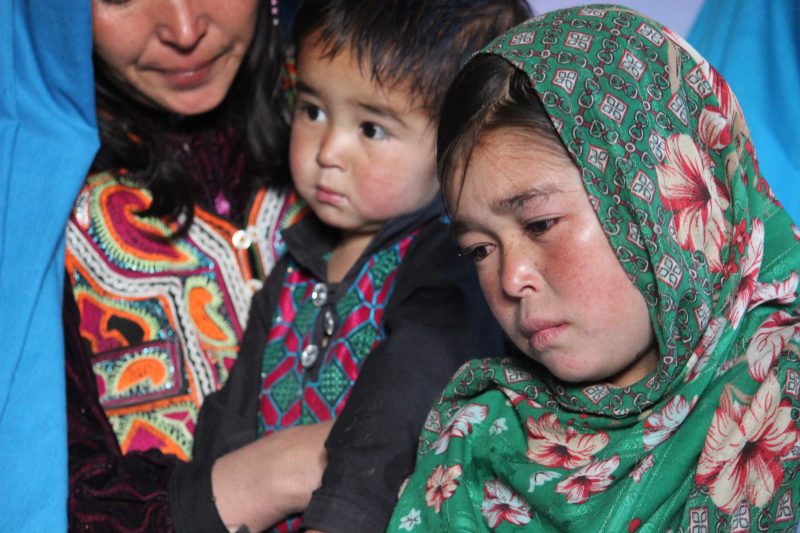 “Never imagined seeing my 85 yrs old grandma forcibly uprooted from her home. In so much despair seeing her in a news clip about #jaghoriUnderAttack. I need your support to tell the world about this humanitarian crisis in Afg affecting 500,000 helpless #Hazaras attacked by Taliban.”

This is what Shukufa Tahiri, Policy Officer at Refugee Council of Australia, wrote on Twitter after seeing the picture of her displaced grandmother on social media.

Her tweet included a family photo of her grandma posing happily with the family harvest alongside a screen capture of the same woman wearing a dark shroud and the haunted expression typical to conflict refugees.

Never imagined seeing my 85 yrs old grandma forcibly uprooted from her home. In so much despair seeing her in a news clip about #jaghoriUnderAttack. I need your support to tell the world about this humanitarian crisis in Afg affecting 500,000 helpless #Hazaras attacked by Taliban pic.twitter.com/W9ICD2O2xw

Over the past three weeks the Hazara-populated districts of Malistan and Jaghori in Afghanistan's Ghazni province, and the district of Khas Uruzgan in Uruzgan province have been at the centre of a violent assault planned and carried out by the Taliban.

Reinforcements were belatedly sent in, expelling the Taliban from Malistan, while military operations are still ongoing in Jaghori and Khas Uruzgan.

Houses, schools and buildings have been burned and hundreds of civilians have been killed or kidnapped, according to reports. Telecommunications have been cut off, casting into desperation those unable to reach family members trapped in these districts.

Mohamad Aziz Bakhtyari, presidential advisor and a member of the commission sent to assess the situation in Malistan and Jaghori, told the BBC that around 60 percent of civilians from the two districts have been displaced in Taliban attacks. Neighbouring districts Ghazni and Bamiyan have filled up and no longer have the capacity to take more internally displaced people, he said.

Among the displaced, according to several social media sources including the Twitter account of an Afghan pilot, is Murtaza Ahmadi, the little football fan whose photos with a homemade shirt bearing Lionel Messi's famous number 10 went viral two years ago. Media have not yet verified this claim.

Despite their poverty, Jaghori and Malistan are renowned for being among the most peaceful and progressive districts in Afghanistan. Here, female students better their male counterparts in academic achievement, civil society is strong, women work outside their homes and the districts are so free of crime that neither even has a prison.

Hospitals and schools operate in spite of a near total absence of central government funding, thanks to financial help from wealthy local families.

These are some of the achievements that made the districts such desirable targets for the Taliban, which has long harboured a sectarian grudge against the Hazara.

No news coverage on this: The Taliban have launched a major offensive against the progressive Hazara. In Jaghori region there is near-universal girls education while women work outside their homes and drive. https://t.co/29DL1NZljX

Some residents of the two districts initially waited in their homes in the hope that the attack would be quelled. Others left as soon as the incursion began. There was a compelling logic for choosing the option Shukufa Tahiri's grandmother chose.

In the past, the government has been slow to respond to Taliban attacks on regions populated by the Hazara minority. The Taliban, meanwhile, do not spare civilian blood in such attacks.

The group's record of crimes against Hazara goes back to the early 1990s, and has continued since it was ousted from power in the US-led invasion of 2001.

The chaos has fuelled protests in Kabul and elsewhere.

On November 11, a resident of the capital, Ahmad Javid, wrote on Facebook: “I am leaving home right now to march towards the ARG Palace. Anyone willing to join: come to Haji Nawrooz square.”

Soon hundreds of people gathered at the square. Young women and men asked President Ashraf Ghani to send reinforcements as soon as possible in order to avoid a humanitarian catastrophe in the besieged districts.

Other protests sprang up in Mazar-e Sharif, Bamiyan, Herat and Daykundi. The demonstrations continued until November 12, when a terrorist attack targeting the demonstration in Kabul left ten people dead and dozen others wounded.

All they want is their rights as the citizens of #Afghanistan . How many more billions of dollars have to be spent and how many more thousands of people have to be killed to ensure security of Afghan citizens? #afghanistanisnotsafeforhazaras https://t.co/CMzkTHVorE

The day before, President Ashraf Ghani had assured demonstrators that troops would soon be deployed, yet reinforcements arrived only two weeks later. Even then, government forces bided their time before attacking Taliban positions.

The international community has also refused to voice concerns about the crisis as foreign actors train their focus on bringing the government and the Taliban to the table for direct talks. Local sources in Malistan and Jaghori told Global Voices that F-16s flew over the skies for days after the attack began without intervening.

For the moment, the Taliban have been forced out of Malistan, while the battle in Jaghori in ongoing. Yet the group has left in its wake ruins, despair and a pervasive fear of future assaults in once-peaceful districts.

In the meantime, some Hazara activists have started a “March for Justice”, from Malmö in Sweden to the Nato Headquarters in Brussels.

They are asking for an immediate protection of the people left and stuck in the districts under attack by Taliban and a military operation against the Taliban in the adjacent districts in order to cripple their capabilities for future attacks on central highlands.