‘I am prepared to go to jail': Founder of Hong Kong's Umbrella Movement offers hope ahead of trial 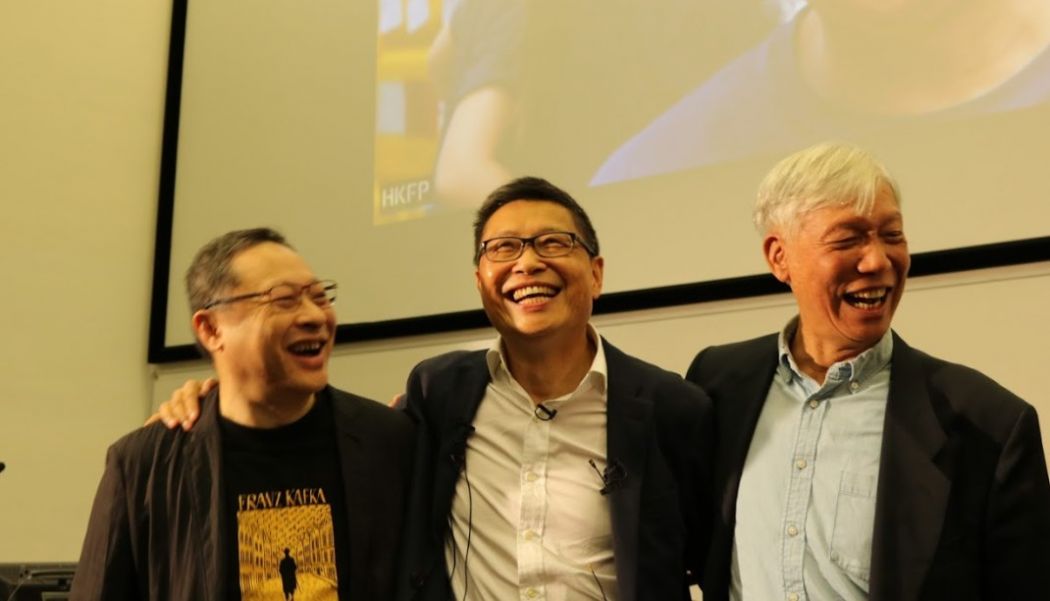 This post was contributed by a group of sociology graduates from the Chinese University of Hong Kong.

The ‘Umbrella Movement’ was a massive protest that took place between September to December 2014 that pushed for the right of Hong Kong citizens to nominate the city's top leader. However, the Hong Kong government ended up deploying tear gas against the peaceful protesters who then dispersed and ‘occupied’ three major downtown areas near Central, Causeway Bay and Mongkok.

The unprecedented sit-in protest ended in December after clashes with the police. Since then, over a thousand activists have been arrested for participating in the protests, more than 220 were prosecuted and about 81 have been convicted to jail sentences.

“I am prepared to go to jail”

Ahead of his upcoming trial, professor Chan delivered a lecture at the Chinese University on November 14 with Benny Tai, Chu Yiu-ming and six other co-defendants. The three-hour talk, entitled “Tribute to the Enlighteners”, was attended by more than 600 people who were mostly Chan's former students and pro-democracy activists.

The 59-year-old sociology professor explained that as he anticipated a possible jail sentence, he had applied for early retirement this year.

To encourage the young generation to stand up to defend what they believe, he said,

I am prepared to go to jail… So long as we are not crushed by the trial and the prison sentence, and we do not become depressed or angered, then we will come out stronger.

He emphasized that he is not pessimistic about the future and he has no anger or sadness, only gratitude. He said he was moved by the support he and others received:

It makes me believe in the goodness in people – it is our hope. I hope you do not give up – “we can only see the stars in the darkest hours.”

His path to civil disobedience

Chan recounted his activist journey back in 1977 when he was invited by a senior student to a protest concerning the mismanagement of Jubilee Secondary School. After the protest, he chose sociology as his major at the Chinese University.

During his university years, former China top leader Deng Xiaoping had adopted an open door policy. However, economic liberalization did not lead to a more open political environment. Chan was inspired by mainland Chinese activist Wei Jingsheng who was jailed for 15 years for writing a long piece on “the fifth modernization”, i.e the political modernization in 1978. Chan also admired Hu Ping, a Beijing university undergraduate in 1979, who wrote for an underground journal on the value of free speech and asserted that “if a person has lost one's will to express his views and rights, the person will become a slave and a [political] tool.”

At that time, Taiwan was under martial law and the dictatorship of Kuomingtang. Many young people there also stood up for democracy, inspiring other Chinese communities in Asia, including Hong Kong. He still remembers the smile on Taiwan political activist Shih Ming-teh when he was sentenced to life imprisonment in 1979.

In the early 1980s, the British and Chinese governments had started diplomatic negotiations on the future of Hong Kong. There was also a vigorous debate in Hong Kong during that time with Chan and the student union of the Chinese University supporting a ‘democratic return’ to China.

Chan went to Yale University in the United States for his doctoral studies. There, he was influenced by Spanish scholar Professor Juan J. Linz, whose political theory is linked to the democratization movement in countries like Brazil.

When Chan returned to Hong Kong from Yale in 1992, he decided to promote the development of civil society in mainland China. At the same time, he joined the pro-democracy movement in Hong Kong. Even during that time, he asserted how Hong Kong fulfilled all the prerequisites for democracy – a robust civil society, the rule of law, and the existence of a political opposition.

However, under the current political environment and the suppression of the Umbrella Movement, how can Hong Kong people move on? Chan referred to the lifelong struggles of Nelson Mandela, Martin Luther King, and Mohandas Karamchand Gandhi. He believes that Nelson Mandela's detention gave the civil disobedience movement an adequate moral strength and inspiration to challenge the ruling party.

Chan revealed that he had attempted to communicate with Beijing before he chose to take an active role in the civil disobedience movement. But the communication failed and he realized that Beijing would not grant genuine democracy to the people of Hong Kong. Coincidentally, Benny Tai wrote a newspaper piece on civil disobedience and approached him about initiating an “Occupy Central” action. Chan believed that the success rate was just 5 percent, “but if the cause is right, why not take the 5 percent chance?”

He ended his lecture with a quote from Irving Stone's Lust for Life – which is a fictional biography of Vincent van Gogh:

You cannot be firmly certain about anything. You can only have enough courage and strength to do what you consider to be right. Maybe it turns out that was wrong, but still you would have done this, and it is most important.

And his advice to students:

During the open forum he was asked about how he communicates with the new generation of radical young activists who believe in Hong Kong independence. This was Chan's reply:

Although I don’t agree with independence nor violence, I understand they are doing what they could to find a way out for Hong Kong, and are searching for a new discourse of democracy. They argue intensely with me, or outrightly ignore me, but at least they haven’t given up, and still hope to find a way. It is a chaotic situation, no one would be entitled to say that he/she knows best. I could only offer them some insight about potential problems, to the best of my experience and knowledge.

He was glad that people had been reflecting upon their political stance and strategy after the Umbrella Movement. Chan referred to Edward Leung as an example. The 27-year-old pro-Hong Kong independence activist was sentenced to six years imprisonment for taking part in a riot in Mongkok in 2016:

I could see it on Edward Leung, that he did a lot of reflection… He remarked, ‘Independence might not be the only way,’ and [now] he’d talk about this sort of things. I could also see it on other senior democrats, as they start to understand the frustration behind the slogan ‘I am Hongkonger, not Chinese’. I hope such kind of empathy would be a starting point for mutual understanding.