Meet the people saving a 12,000 year-old forest from being turned into a coal mine 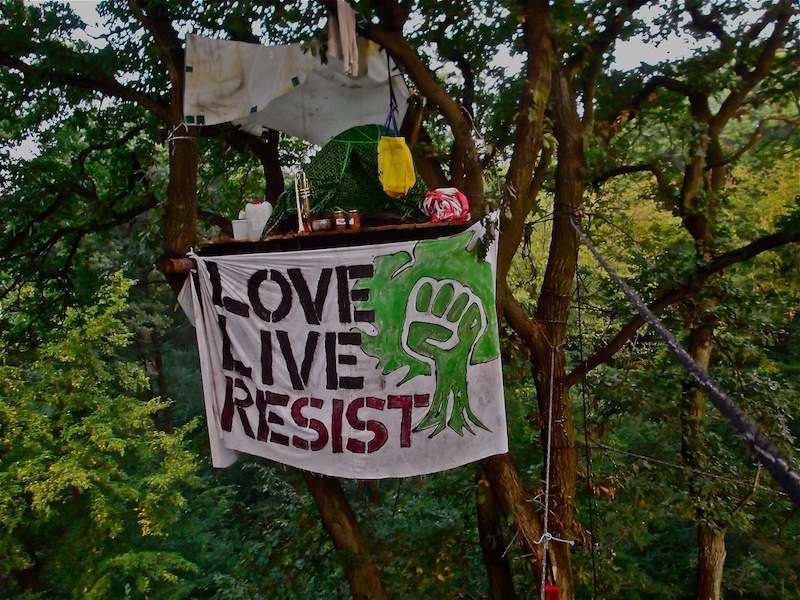 The original version of this article was written by Renee Karunungan at 350.org and is based on video interviews conducted by Sarah Hüther, Lou Huber-Eustachi and Ruben Neugebauer.

Located in the German state of North Rhine-Westphalia, the Hambach Forest is 12,000 years old and dates back to the last ice age. Currently, however, only 10% of the original 5,000 hectares remains.

That portion of the Hambach forest is safe—for now. The German energy giant RWE, who bought the forest in 1978, had been preparing to clear of what remains of the ancient forest to expand one of its vast open-pit mines, despite fierce protests. In early October, a court ordered RWE to put its plans on hold while another lawsuit to protect the forest is still pending. While this is a huge win for those who have been working to protect the forest, the fight is far from over, and since 2012, a number of activists have been occupying the Hambach, determined to save it for good and end coal mining in Germany.

The defenders of the forest

“I decided to live in the forest and put my body in between the cutting machines,” said Strobo, one of the activists who's the living in the Hambach Forest.

The activists have built treehouses to live in and have set up road barricades to stop the mining company and police vehicles from coming in to clear access for RWE.

In September, authorities from the German state of North Rhine-Westphalia ordered that the treehouses be removed to make way for the expansion of the coal mine.

“The people who took me down from the treehouses were professional tree climbers,” said Lou, another activist. “They came with cranes, cherry pickers, and harvesters to destroy the trees and cut their way into the occupation so they could bring the heavy machinery and evict people from the treehouses.”

The German energy giant RWE extracts 49.6 million tonnes of lignite, also called brown or soft coal, each year. Germany is the largest producer of lignite in the world. Brown coal produces more carbon emissions than hard coal. RWE's coalfields in the Rhineland are the biggest source of carbon emissions in Europe. It is responsible for 80% of Germany’s emissions from the power sector. Three out of the top five polluters in Europe are lignite plants owned by RWE. RWE has expressed disagreement with Germany's timeline for the phasing out of coal.

“It's not just about the forest”

Another activist, Momo, links the fight of saving the Hambach forest to other struggles for climate justice. “We are producing a large percentage of carbon emissions globally, causing climate change impacts, which people in the Global South have to flee from. This fight is more than just about the forest getting cut down,” he said.

Lou agrees: “For me, it’s part of a wider international struggle. What’s happening here — the coal that’s being mined and fueling climate change — is a global problem. It was really important for me to come here and support the fight, and stand in solidarity with the fight here and struggles around the world, against climate change, capitalism, racism. This is part of a much wider struggle against the general system as it is.”

Germany has pledged to reduce its greenhouse gas emissions by 40% by 2020, but is set to fail to meet its targets. The government has set up a coal exit commission. By the end of the year, this task force has been asked to find economic perspectives for coal workers and regions, spell out measures to reduce carbon emissions in line with Germany's climate targets, and name an end date for coal-fired power production.

The implications for coal miners and other workers have received a lot of attention in the public debate about a coal phase-out. This is where Christopher’s work becomes important.

Christopher is part of the climate justice movement and has been working with communities affected by mining. He organised the first meetings between lignite workers and climate justice activists, or ‘peace talks’ as he refers to them, because ‘there was too much confrontation’, he says. 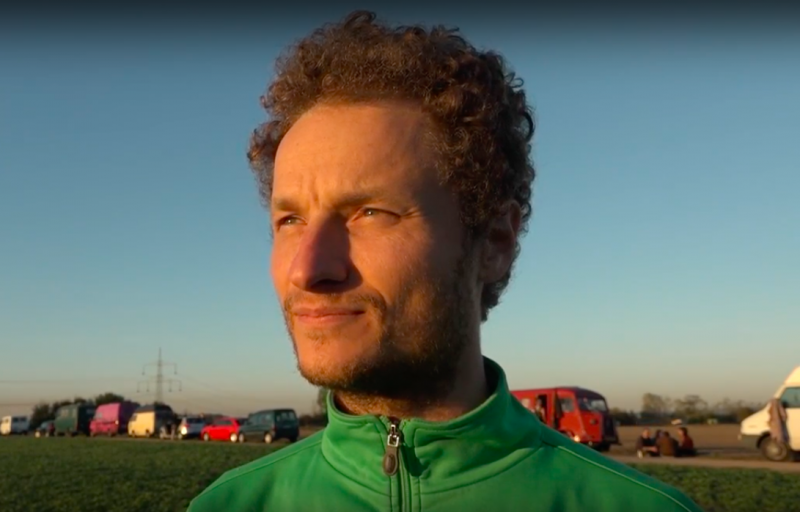 Christopher has been bringing climate activists and coal workers together

“We talked about climate change and lignite, about jobs and the transformation of the economy. It’s not just the jobs in the lignite industry. When we stop lignite we’re not just stopping the biggest source of carbon emissions in Europe, we are also forcing a debate about other economic sectors — what kind of economy do we want? We started this conversation with the lignite workers,” Christopher said. 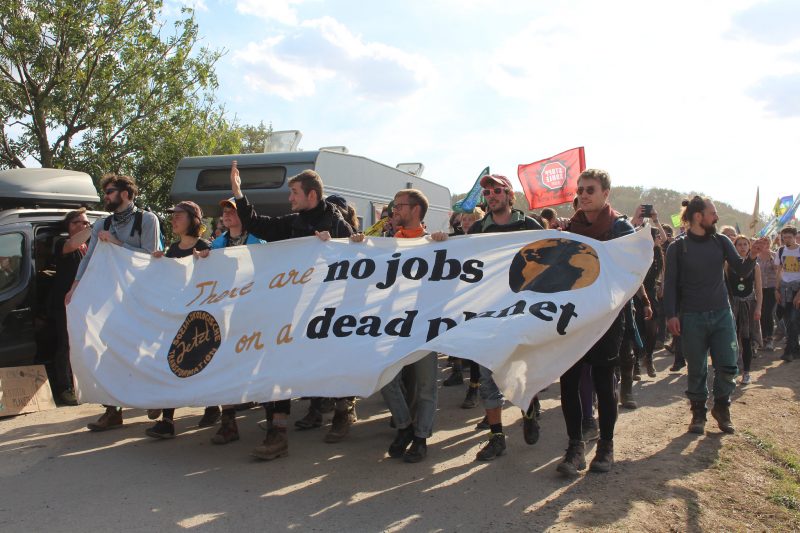 The power of a united movement

Colombian Maria Fernanda, who has lived in Germany for 22 years, is also part of the actions to save the Hambach forest. It’s an important fight for her and the indigenous peoples of Colombia because RWE’s destruction has also affected their forests back home.

“Last year, some indigenous women from Colombia came to Germany to appeal to stop coal mining there,” Maria Fernanda said. She worked as a translator for the indigenous people. 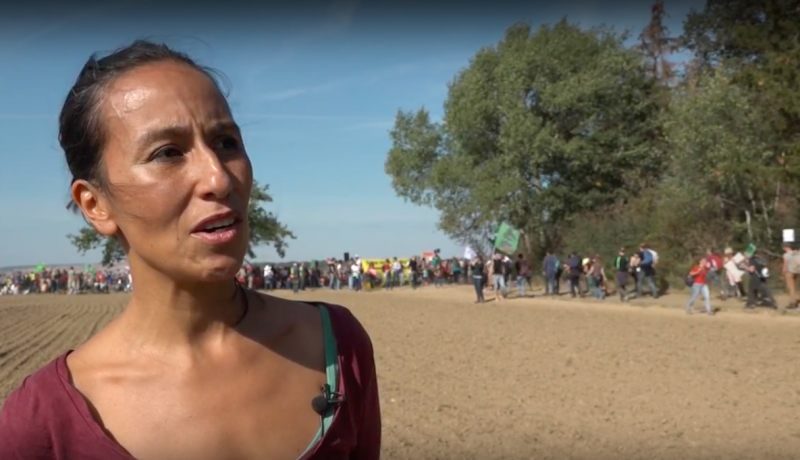 Maria Fernanda next to the Hambach forest

Strobo, Lou, Momo, Christopher and Maria Fernanda say that it is this growing movement to save the Hambach Forest that gives them hope.

“The feeling is good, we’ve managed to build a big, diverse movement over a short period of time, which is necessary to fight for climate justice,” said Christopher.

For Maria Fernanda, it’s an awakening of the people who have come to realise that ‘we don’t only need money, we depend on mother Earth — clean air, water — to eat and to live’. “It’s a good time to come together and unite,” she said.

And by coming together, Momo believes that they are sending a strong message to the German government that enough is enough; that the solidarity of thousands of people shows their collective strength.

A Win at Hambach

This is a major victory for the climate movement. Watch and learn how a group of people came together to protect an ancient forest and stop the expansion of a massive coal mine. #hambachforest #hambibliebt

Activists like Lou and Strobo who have built treehouses in the forest, which were destroyed by the police and which the activists have since started re-building, will not give up the fight.