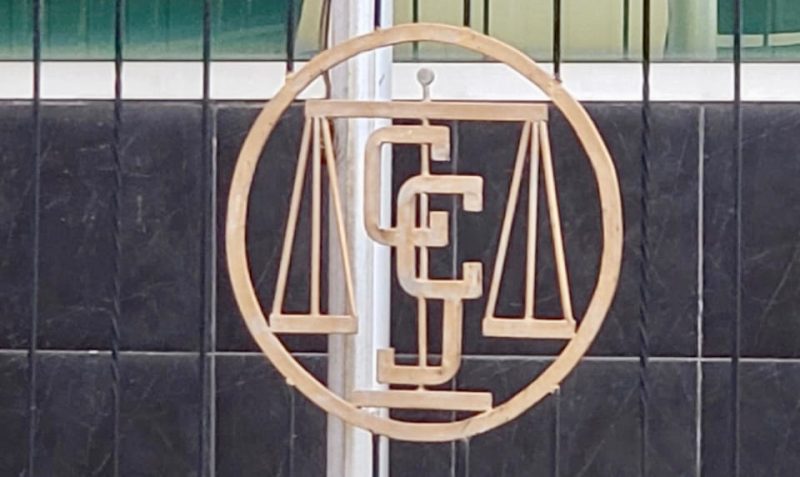 Signage at the Caribbean Court of Justice (CCJ) at its headquarters in Trinidad's capital city, Port of Spain. Photo by Gerrard Gomez, used with permission.

Grenada and the twin-island nation of Antigua and Barbuda both faced a major referendum on the choice to adopt the Caribbean Court of Justice (CCJ) as their final appellate court — which would require a constitutional amendment — or retain the current Judicial Committee of the Privy Council, the final court of appeal for the United Kingdom's overseas territories and Crown dependencies (as well as various Commonwealth countries).

In both jurisdictions, the voter turnout was low, but the majority of those who did vote rejected the CCJ. The Antigua and Barbuda Electoral Commission posted the official results online with 48 percent in favor of the CCJ. In Grenada, where 28 percent of eligible voters showed up, CCJ support was slightly less at 45 percent.

This was the second time in the past two years that Grenada has put this issue to a vote, with the same result.

The CCJ was established by an agreement signed by 12 member countries of the Caribbean Community (CARICOM) and officially inaugurated in 2005. It serves as a tribunal interpreting the Revised Treaty of Chaguaramas that governs CARICOM.

Although based in Trinidad and Tobago, it can operate in any CARICOM member country. However, it has gained little traction as a final appellate court in the English-speaking Caribbean. Only four CARICOM territories — Barbados, Belize, Dominica and Guyana (roughly one-third of the original signatory countries) — use the CCJ as their final appeal court on civil and criminal matters.

The media called out CCJ's inadequate public education campaign as a factor behind the lackluster response, even though the court has boosted its social media presence and now live streams hearings to the public.

Meanwhile, Antigua and Barbuda's National Coordinating Committee for the Caribbean Court of Justice was accused of conducting a one-sided public education campaign in favor of the CCJ. It later conceded: “The people have spoken.” Former CCJ President Sir Dennis Byron, like others, admitted that more public education and the wider involvement of civil society is needed.

Local politics may have negatively affected the referendums; both nations held general elections within weeks of each other in March 2018 with their respective incumbent administrations emerging victorious.

In Grenada, where Prime Minister Keith Mitchell's party did a clean sweep for the third time, the country's opposition party has no seats in its House of Representatives. Mitchell has since said he will not consider another referendum on the matter, leaving the opposition “saddened and depressed.”

In Antigua and Barbuda, where voter turnout was at 33.5 percent of the electorate, Prime Minister Gaston Browne expressed his “utmost disappointment” at the “no” vote, while he and the opposition leader sniped at each other over the referendum results.

The CCJ itself sought to put a positive spin on the results, noting that it “remains committed to the region”. The court's third president, Justice Adrian Saunders of St. Vincent and the Grenadines, noted in a November 7 statement:

While the news is not what we hoped for, we respect the people of both nations and their decision. The court will naturally continue ongoing initiatives with justice sector bodies in each of these countries, and the wider Caribbean…”

In Jamaica, The response has been mixed. Lawyer Mark Wignall responded to a question posed on Facebook wondering what the results would be if Jamaicans voted to replace the UK-based Privy Council with the Caribbean Court of Justice:

At this moment, I would vote against the CCJ. Why? We tend to believe the regional judiciary is free from corruption and is incorruptible. Big laugh. Judges in the region know each other and must at times, exchange social and political views with each other. They form factions with each other. Scary! The Privy Council is far away and it has nothing invested in us, one way or the other in regional matters. In that understanding I trust the outsider [Privy Council], not because they are better jurists than our people, but because dem way ova dey so [they are way over there].

Jamaican human rights lawyer, Bert Samuels, who supports the CCJ, acknowledged the widespread lack of trust and perception of political interference and cronyism in his comments to a local radio station. He added that “there is a lot of work to be done” before the Caribbean can be persuaded to abandon the Privy Council, which he called its “colonial court”. Another outspoken attorney, Clyde Williams, noted during a discussion on a Jamaican radio station that the CCJ is “an emotional subject”:

People do not trust the power institutions, the hierarchies in the region. People think that persons can pick up their phones and call judges and have judges make decisions to favour them…right across the region, people are concerned that the courts are being impacted upon through persons with power, prestige and wealth – and that's not going to change for a long time to come.

Meanwhile, UK academics and its legal fraternity have signaled faith in the Caribbean judicial system. A young Jamaican lawyer shared on Twitter:

In a book written by UCL professors examining how judges are chosen for international courts, the CCJ is praised for its process of selecting independent, high quality judges. #CCJ https://t.co/O8S0QCNU11

CCJ president perplexed at Caribbean people still finding “excuses” to support Privy Council. But they may be justified! Too much political interference to begin with! #CARICOM #CCJ https://t.co/PxDDDaWeqM

Still, the CCJ maintains an active regional presence. The court's Academy for Law will hold its fifth biennial conference in Jamaica in December 2018. The CCJ also plans to continue to collaborate on justice reform projects, including a Sexual Offences Model Court under the Canada-funded JURIST Project, to be housed at the High Court of Antigua and Barbuda in 2019.

The CCJ is currently deliberating on some significant cases, including an upcoming appeal by four transgender women against their conviction for being men wearing female attire in public for an “improper purpose” — an offense in Guyana.

In some parts of the English-speaking Caribbean, people seem quite happy with the status quo — regardless of their political leaders’ wishes. While lawyers across the region debate its pros and cons, the concept of a regional court of appeal does not seem to resonate.

Unless regional norms around corruption change drastically, a regional court of appeal does not seem likely in the foreseeable future.