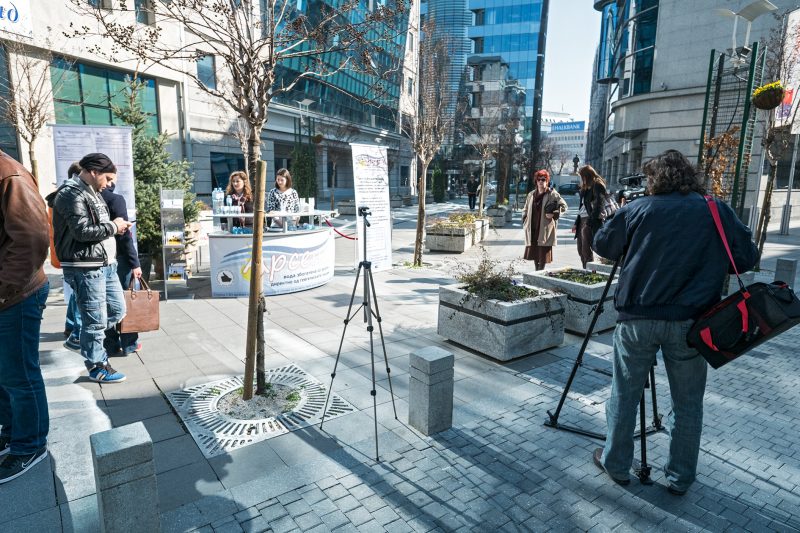 Promotional event for the mock brand of mineral water “Arsena, the water enriched with arsenic, directly from the taps of Gevgelija” in Skopje on February 17, 2014. Photo by Vanco Dzambaski, CC BY-NC-SA.

In a big victory for grassroots activism in Macedonia, a new water supply system was built in the southern municipality of Gevgelija, after years of struggle by local activists who kept warning their drinking water is poisoned with arsenic.

On November 7, 2018, the authorities opened a new water supply facility that gathers water from three new wells and contains a purification unit and pipelines. The system will provide drinking water for the 19,500 inhabitants in the surrounding areas, local news site Gevgelijanet.com reported.

The facility, which cost 1.7 million euros (1.9 million US dollars), finally solves the problem of toxic arsenic seeping into the drinking water. The pollution began 15 years ago after an earthquake put arsenic-rich rocks in contact with the water table.

This development vindicated “Arsena” — a group of local activists that had been trying to warn the public about the water's toxicity for several years. Pegged as troublemakers by the right-wing populist regime that ruled Macedonia from 2006 to 2017, the activists suffered persecution as a result of their efforts.

Even though the Institute of Public Health of the Republic of Macedonia determined in 2012 that the water was dangerously toxic, the political authorities refused to admit that there was any problem with the water supply. The populist party VMRO-DPMNE, that was in power at the time, prioritized maintaining a perception that the country is prospering under their rule to actually solving issues that affect the quality of life, like air and water pollution. Therefore, both the municipality and the state government maintained that everything was okay and that those who claimed otherwise were just pawns of the opposition.

Arsena conducted additional analyses of the tap water in several different labs in 2014 and attempted to publish the results. The government reacted by treating them as pariahs and subjected them to various forms of harassment over the years — including smear campaigns and malicious inspections intended to block their work. Moreover, most local media (self) censored any information provided by the activists. The censorship was so strong that even billboard companies refused to rent them space to publish the results of the analyses.

In order to break the news for their local audience, the activists had to resort to roundabout tactics, and first spread the information at the national level. To do that, on February 17, 2014, they devised a press conference in the capital, which was not announced as an initiative by civil society (which the media mostly ignored) but rather as a commercial presentation of a new brand of mineral water — Arsena.

When the reporters of national media came to the “business” event, the activists presented them with plastic bottles of water from Gevgelija water supply. They explained that the brand is called Arsena due to the high level of arsenic in the water, and invited everyone to share the water that is consumed on daily basis by citizens of Gevgelija. They also presented the results of the scientific measurements, as well as health data indicating high levels of cancer and mortality in the area, which is likely related to the toxic water. 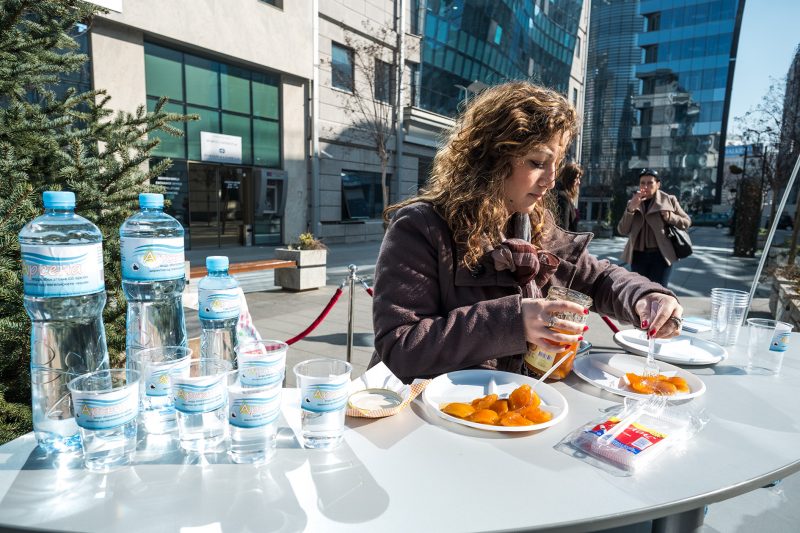 An activist preparing the promotion of a mock brand of mineral water “Arsena”, with bottles filled with tap water from Gevgelija, containing dangerously high levels of arsenic in February 2014 in the center of Skopje, Macedonia. Photo by Vancho Dzhambaski, CC BY-NC-SA.

Only one national level TV reported about this event, but that was enough for the citizens of Gevgelija to learn about it, and make a rush on the local shops to buy bottled water.

During the next few years, the activists pushed the issue in any way they could by starting petitions and actions for donating clean bottled water for the underprivileged socioeconomic groups. They also fought for other health causes.

Slowly, the activists managed to overcome denial by the authorities, who never admitted the tap water is toxic, but nevertheless announced the opening of new water treatment plants. Several months after the PR stunt in the capital city, Gevgelija local government performed ribbon-cutting ceremonies for a new well. However, the construction site remained empty for the next three years.

The actual construction of the new water supply system started in February 2017, thanks to a new project co-funded by the Macedonian government, the European Union and the World Bank. The same year, after local elections, the municipal government changed. Solving the water supply problem was one of the main goals for the new administration, and the facility was finished by November 2018. 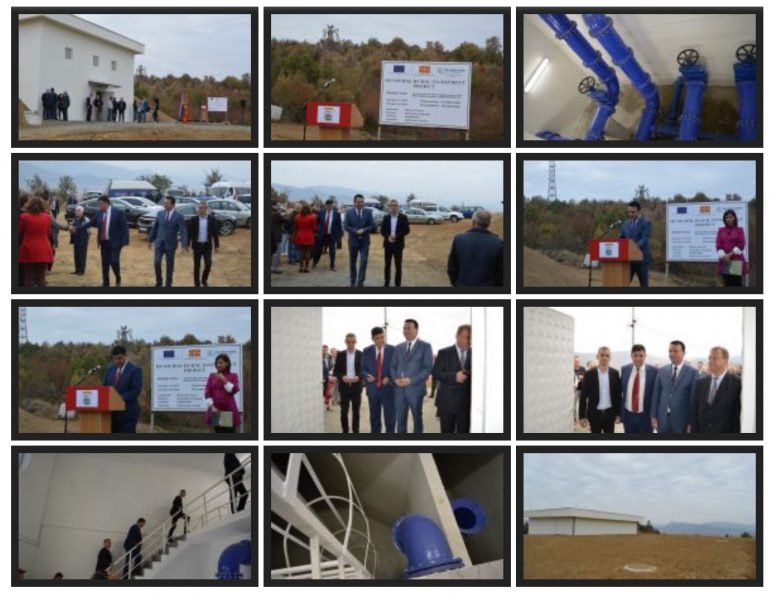 Collage of photos from the opening of the new water supply facility in Gevgelija, Macedonia, courtesy of Gevgelijanet.com, used with permission.

The activists of the Arsena initiative celebrated in their characteristic modest way, by publishing the following statement alongside the good news on their Facebook page.

Arsena completed the civic task it took upon itself – it incited a local government to acknowledge the presence of toxic arsenic in the water in Gevgelija (after four years of lying that it isn't there) and to start a project for new waterworks system. The new local government recognized that this is priority project for citizens of Gevgelija and finished the project by providing the additional resources which had to be invested in order to correct the flaws in the project, so it can actually function.

Clear drinking water without arsenic is a present for the people of Gevgelija on 7th of November, the 74th anniversary of the liberation of the town [during World War II] which is also the Day of the municipality.