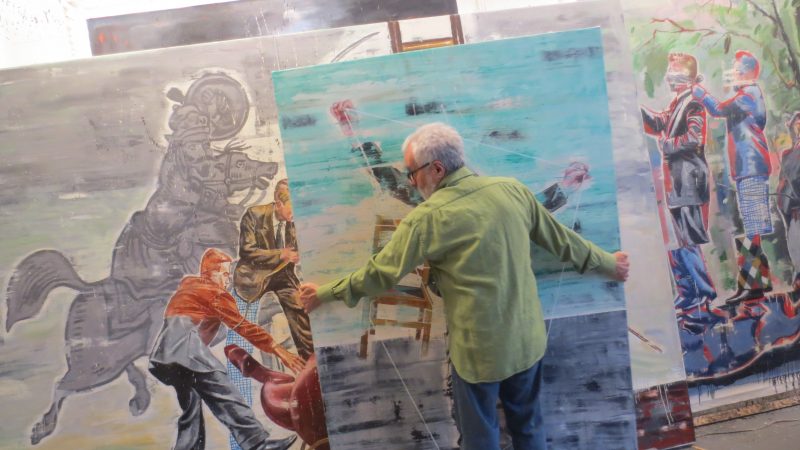 From the Homa Gallery in Tehran to the Metropolitan Museum of Art in New York, Nicky Nodjoumi’s art has been exhibited around the world. Having lived and worked in his birth country of Iran before and during the country’s 1979 revolution, Nodjoumi, now a Brooklyn resident, developed a keen interest in the relationship between art and politics. He secretly nurtured that interest as an art student in the 1970s at City College in New York until a new generation of artists “changed New York’s art scene and ended the domination of the elite.” From that point on, the gallery owners who had shunned his work began opening their doors to him.

Viewed as a whole, Nodjoumi’s art is a powerful, interpretive, multifaceted, sometimes satirical, exploration of issues related to power and politics. Throughout the decades, Nodjoumi’s work has remained bold and curious as opposed to declarative.

Omid Memarian (OM): The politics of today figure strongly in your work. What’s your thought process and how do you portray political issues without focusing on a specific incident or personality?

Nicky Nodjoumi’s (NN): I start with a photo from a newspaper or magazine. There was a time when artists would put a model in front of them and draw a subject, but times have changed. For example, if I want to paint Mr. Trump’s picture, I can’t use him as a model but there are a lot of photos of him that I can use to match my chosen topic. I often try to change the form or the body so that it only bears a superficial resemblance to reality. Not everyone will recognize who that person is because I want everyone in the world to make a connection when they see it. 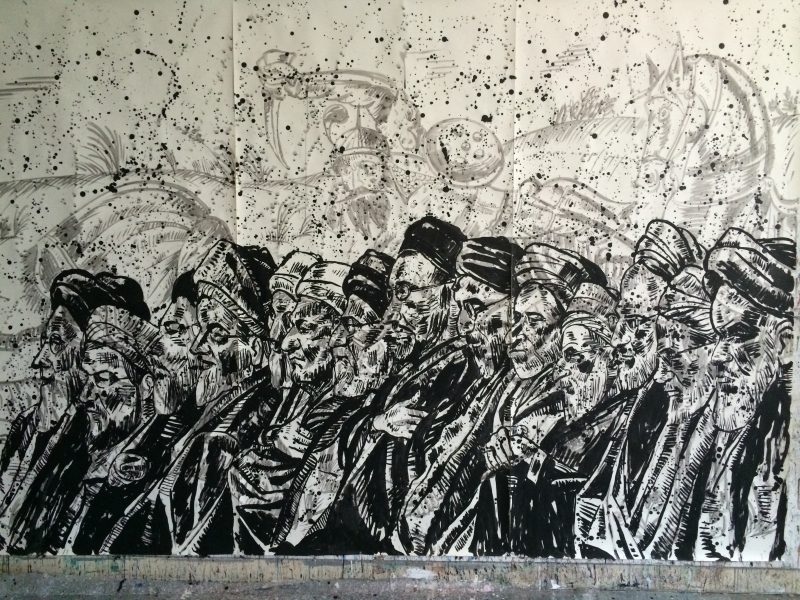 OM: For the past 10 years, you have focused on the issue of power, especially in your most recent collection, “Field Work and Two Faces.” How does it shape your work?

NN: Power is based on relationships between people. We have all kinds of power; the state is the primary center of power and then there is the family. Power is not hidden but many might not pay attention to it. Choosing power as one of the main topics of my work is rooted in the desire to drag it down to the ground and make fun of it. It’s important to treat it lightly rather than seriously. In every work, power is represented from a different angle, but ultimately, when you look at them as a whole, you see the humor. 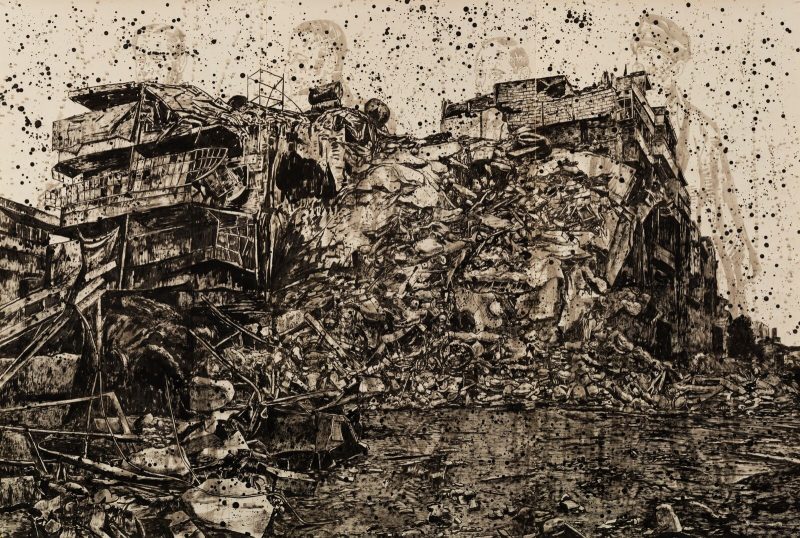 OM: You studied fine art at City College in New York in the 1970s. Since then, art schools have multiplied around the country. How have they changed?

NN: When I went to university in 1972, I was done in a year and a half. I wanted to finish and go back to Iran as soon as possible. It was a time when color-field and minimalist styles were popular. My problem with the school and my professors was that they weren’t able to answer my questions about the link between art and politics.

I was involved in student organizations and political activities. It was important for me to understand the relationship between art and politics before learning how to paint. What I saw outside of school was not helpful. Most of it was abstract, which I also did at school and got good results, but I was also pursuing subjects that I liked. Of course, I didn’t share those works with anyone.

NN: Because they wouldn’t get it. Abstract art’s dictatorship crumbled in Europe and New York in the 1980s and suddenly a group of young artists flooded the East Village galleries with works based on savage and stark realities from their environment. Small shops popped up in the streets and people could easily enter and look at the art. All these things changed New York’s art scene and ended the domination of the elite. Suddenly anything became possible.

OM: Your political views are influenced by where you grew up, Iran, and where you live now, the United States. These countries operate in very different political contexts. How has this wide geopolitical gap and your dual identity impacted your work?

NN: Sometimes they get mixed. The power plays in the state structures look the same in both countries, at least in my view. I can present the political climate here the same way I do with Iran. I only need to change the characters. I used to have veiled women and mullahs in my work during the Iranian shah’s [king’s] time [1941-1979] because they were part of the oppressed class. That’s no longer the case, so I don’t use them anymore. We have to look at them differently today. 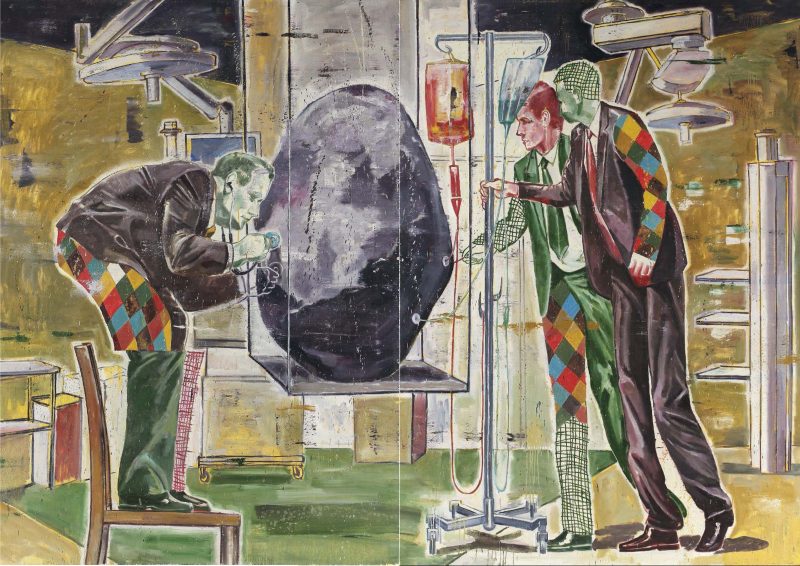 Searching for New Experiment, by Nicky Nodjoumi. Oil on Canvas. Painted in 2010-2013.

OM: Despite the limitations on freedom of expression, there is a lively art scene in Iran that reflects current political and cultural issues. What was it like when you lived there?

NN: Things have changed a lot; there was none of that when we were going to school in Iran. There’s a lot of movement in the Iranian art scene despite the difficult conditions the artists operate in. Just as art styles have multiplied here, art has progressed a lot in Iran, too. We see all kinds of work. There’s a lot of calligraphy and miniature art, which was rare during the shah’s time.

Political events have left their mark on artists as well. I follow certain artists and sometimes I’m shocked by how similar their work is to mine, even though I don’t live there and I don’t show my work a lot. But this path is now open. There are many artists who do a lot of good, independent, original work there. 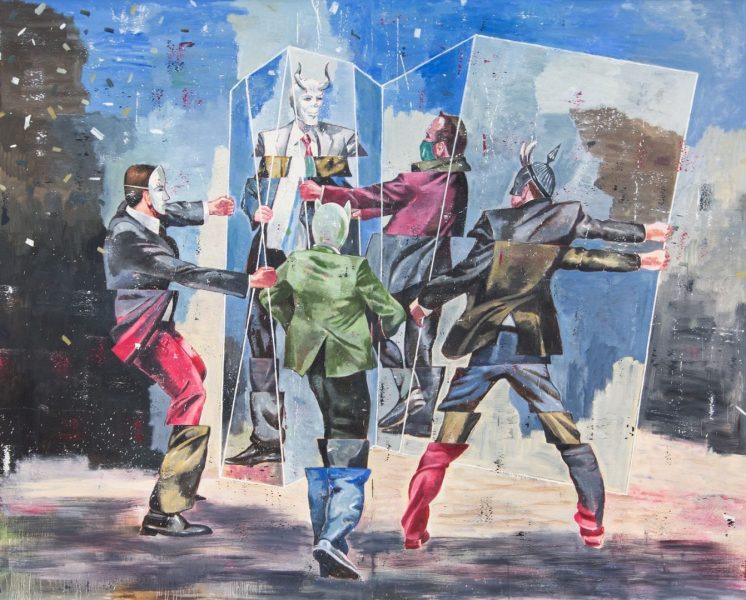 The Oaths of Infidels 2017. Oil on canvas. Courtesy of Nicky Nodjoumi.

OM: What is the difference in working as an artist in somewhere like the U.S., where there is no limit on expression, and a place like Iran where many things are banned?

NN: They are very different. Saul Steinberg was a great American cartoonist who came from Europe. He famously said that Italian fascism gave birth to Italian surrealism. I don’t know how true that is but it is true that during times of crisis, artists find alternative paths. It might not be the exact path they are looking for, but they do manage to be creative despite the tyranny.

You might ask, would I have found a different path if I had stayed in Iran? Certainly. You can see now that young artists in Iran are able to find ways to express themselves.