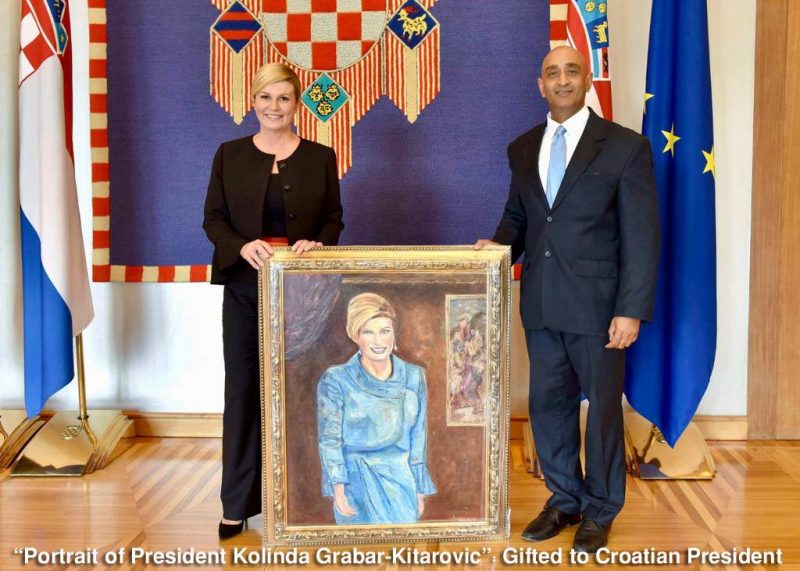 Indian Ambassador Sandeep Kumar bid farewell to Croatia's government officials by giving away some of the paintings he made during his three-year term in the country.

The unusual gift-giving, which created quite a stir on social media, was first revealed through a Facebook post by the Indian Embassy in Zagreb, on October 31, 2018.

Most of the paintings depicted major events in Croatia in recent years including landmarks that made an impression on the ambassador.

For instance, he gifted a painting titled “Elections 2016″ to the Croatian Prime Minister Andrej Plenkovic. In an interview with N1 TV, Kumar explained that he wanted to depict Croatia which has a stable political process with the people “voting and marching towards a new Croatia, not the former Yugoslavia.” 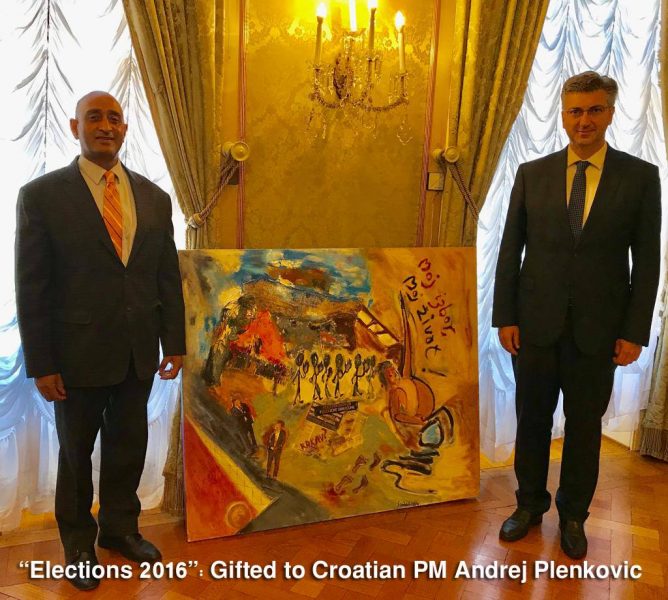 Indian Ambassador Sandeep Kumar (left) and Croatian Prime Minister Andrej Plenković (right). The
text in Croatian on the painting reads “My choice, my life.” Photo by Embassy of India in Zagreb, posted on Facebook.

As an abstract piece of art, it is open to interpretation. A comment by the Total Croatia News website noted that it is “realistic, since it shows how elections are done in Croatia – chaotically.”

Another painting inspired by current events is named “Agrokor Crisis,” given to the Croatian Minister of Economy, Entrepreneurship and Crafts Darko Horvat. Agrokor is an agribusiness and retail conglomerate which enjoyed regional expansion but became insolvent in 2017. As it was deemed ‘too big to fail’ the government enacted a special law in attempt to rescue the company from bankruptcy. Its management was subjected to criminal prosecution for false accounting, fraud and abuse of economic position. 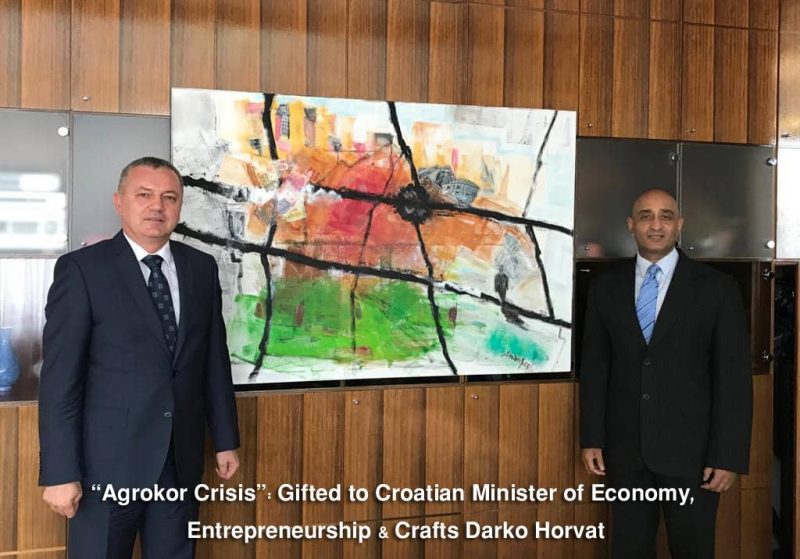 Kumar explained that the cracks on the painting (like a broken mirror) are reflective of the impact of the scandal on the Croatian economy.

A far less controversial painting was given to the manager of the Croatian National Football Team Zlatko Dalić. This painting depicts the success of the team at the FIFA World Cup in Russia during the summer of 2018. 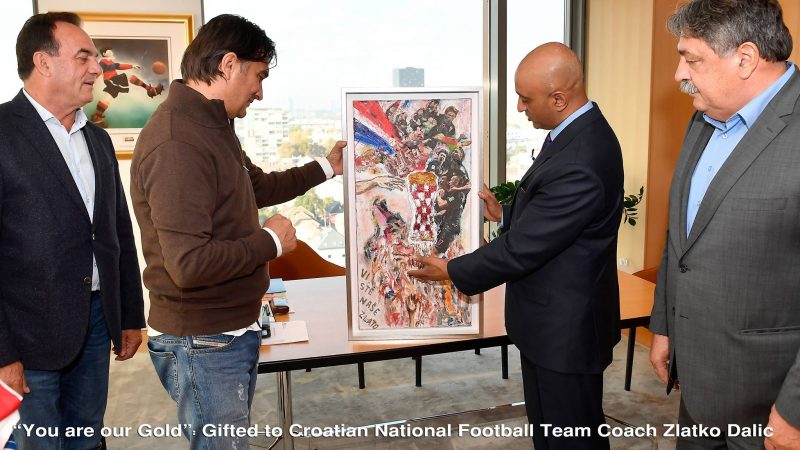 Several Croatian media outlets reported about the gift paintings. The tone of the coverage in regard to Kumar's gesture was quite positive. An article published by the newspaper Jutarnji list noted that during his tenure, the ambassador was known to be a sports enthusiast with his passion for active bodybuilding and yoga; and a patron of the arts who frequented local museums while collecting some paintings by Croatian artists.

But some reports also highlighted sarcastic comments by readers about the paintings, especially about the portrait of the president.

When you look at the eBay [photo] vs when you receive the actual product from Ebay.

Some media outlets published articles with titles like “Kolinda got her portrait as a gift: Twitter users can't decide which is funnier, the painting or president's facial expression” and “Unrecognizable: Take a look how the Indian ambassador painted Kolinda.”

Through his interview with N1 TV, Kumar thanked all the Croatian people who offered him so much love, affection and generosity of spirit:

I know in my future post when the going gets difficult for me, all I have to do is to look at Croatia and I know my heart will be filled with inspiration and with joy.