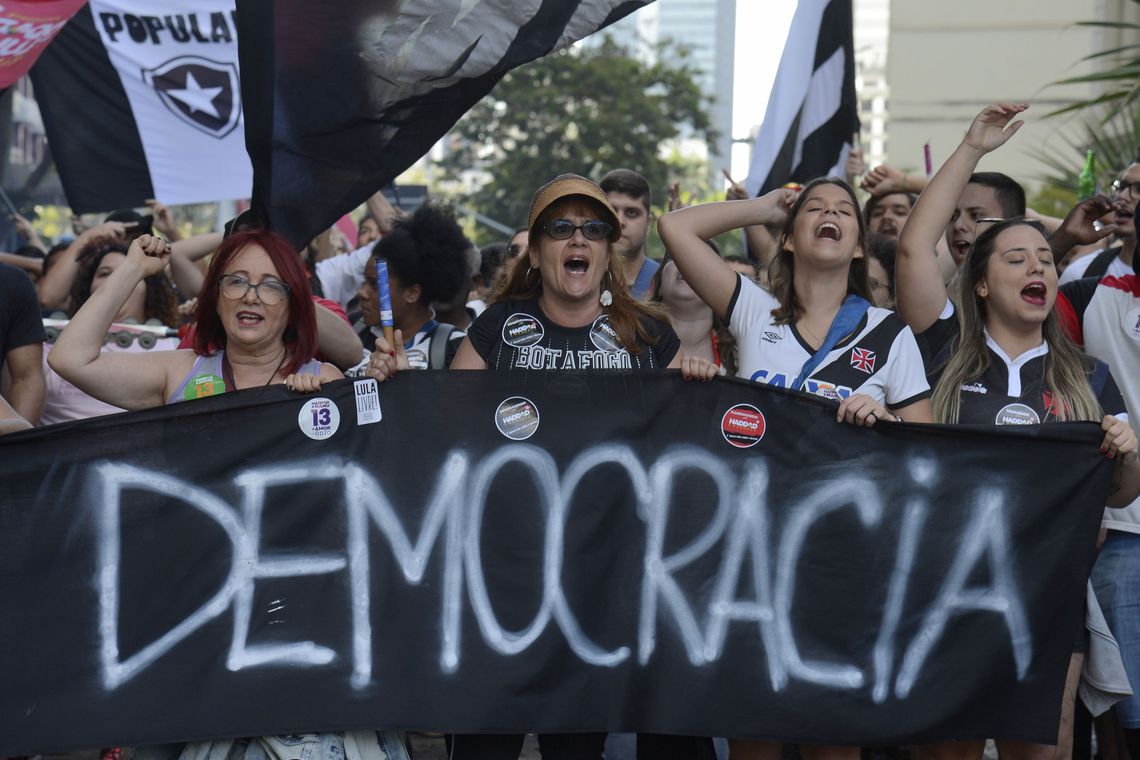 It's likely that all the news that you've read about Brazil in the past few days were about its president-elect Jair Bolsonaro, a former army captain and congressman who publicly expresses homophobic, misogynist and racist views, advocates violence against his opponents and threatens the press [2].

What you might not have read, on the other hand, was about the different ways Brazilians have found to express their opposition to Bolsonaro — and how they're pulling forces together to resist what the next four years will bring.

The country isn’t fascist. It might be conservative and have a limited concept of democracy, but it is not fascist. We will have a lot of reasons for ongoing social unrest. This election will not be over. It’s just getting started because conflicts will not be solved. There is nothing hinting at a decline of all this polarization. On the contrary.

We have listed here a few of the Brazil headlines that didn't make it across to English-speaking media.

Brazil's upcoming Congress will have 51 percent more women [4] — they still only make up 15 percent of the total number of seats — and many have pledged to beef up the opposition to Bolsonaro.

One of them is Joênia Wapixana [5], elected federal deputy by the center-left, environment-friendly Rede party. She is the second indigenous person to ever be elected to the National Congress and the first indigenous woman to ever become a lawyer in Brazil.

Also elected federal deputy, Taliria Petrone is a black feminist professor and activist who was a childhood friend, fellow city councilor and party member of Marielle Franco, the Rio de Janeiro politician assassinated in March. In the wake of Marielle's murder, which remains unresolved, Talita was subject to death threats [6].

They will join Tabata Amaral [7], whose journey from the outskirts of São Paulo to Harvard as a double major honors graduate in astrophysics and political science has inspired many girls in Brazil. At only 24, Tabata is the founder of a national education movement that aims to involve secondary schools students in politics. She was elected federal deputy.

Fernanda Melchionna [8], a former city councilor at the southern city of Porto Alegre, is also poised for a seat at the Chamber of Deputies. In 2012, she made an unforgettable speech [9] at the local legislature after her male colleagues tried to lecture her on her outfit choices.

Few people seem to know this, but the first backers of the #NotHim [10] (#EleNão) movement were football fans [11]. They began rallying behind it [12] in September, following a couple of big Bolsonaro endorsements by famous football players and after some fans echoed the army captain's homophobic rants in stadiums.

It was around the same time that one of Brazil's largest football fans associations, “Gaviões da Fiel”, took an official stand against Bolsonaro. Their club Corinthians, from the city of São Paulo, has a history of resistance: its players led a pro-democracy movement at the height of Brazil's military rule in the 1970s called Corinthians Democracy. When Brazil transitioned to a democracy in the mid-1980s, the movement was a pioneer in advocating for amnesty to all political prisoners.

“Gaviões” note about Bolsonaro — which laid the ground for other football associations who followed suit soon thereafter — said [13]:

It is important to underline the incoherence of a “Gavião” who supports a candidate who not only speaks in favor of the military dictatorship, which we were born opposing, but who still praises and publicly honors torturers who could easily have been the executioners of our founding members.

While Bolsonaro is a former army captain, his defeated opponent Haddad is a philosophy professor [14]. In his honor, his supporters cast their votes on October 28 while carrying books.

Going to vote with a book

Time to vote! Democracy is valuable to us and it's important to defend them with all weapons, mine is the book!

I took Harry Potter and the Prisoner of Azkaban to vote in profesor Haddad, because it's in this book that Dumbledore says: “Happiness can be found, even in the darkest of times, if one only remembers to turn on the light.” I believe in the upturn, Brazil!

Do they vote with guns? We vote with books!
Ele não!!!!
PS: I convinced my +70 grandmother to come and vote in favour of democracy while you're casting a blank vote

After Bolsonaro's victory was confirmed, an image began to circulate on social media. It says “no one lets go of anyone's hand”.

Tattoo artist Thereza Nardelli drew the poster just a few weeks before the vote. To website G1 [24], she said that the inspiration came from something her mother used to say:

We were going through a difficult time in our personal lives, but the country was also going through difficulties. Then she turned to me and said: no one lets go of anyone's hand.

We will continue together!