The Cop and the Showgirl, or how China's newest tool of repression targets the rich and powerful 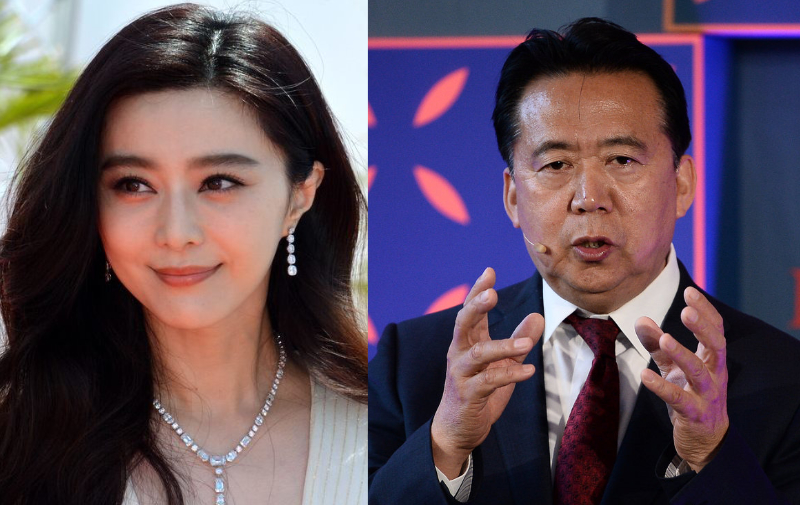 “The Cop and the Showgirl” sounds like the title of a hard-boiled detective novel. Or a screwball comedy with lots of feathered costumes. But this story is about Meng Hongwei, the supercop, and Fan Bingbing, the starlet—the most famous victims to date of China’s newest form of repression: liuzhi.

Human Rights Watch defines liuzhi (留置) as “retention in custody”. It’s a new form of detention for graft suspects. China's National Supervision Commission (NSC) can hold suspects up to 6 months. The NSC must videotape the interrogations. But the detainee has no right to see the tape or, for that matter, a lawyer. The investigators must notify the family within 24 hours, unless that would impede the investigation. There is no independent oversight.

Liuzhi is Chinese president Xi Jinping’s newest tool to combat corruption. It consolidates the graft-fighting powers of various governmental departments. According to Xinhua, the state mouthpiece, liuzhi will:

add to people’s confidence and trust in the party, and consolidate the foundation of the party’s rule.

Fan Bingbing is China’s most famous actress. She is the star of numerous Chinese productions and one of the few to make it to Hollywood. Western viewers know her as the character Blink in X-Men: Days of Future Past. Or as the face of Guerlain, Montblanc and De Beers diamonds. Fan has 62 million followers on Weibo, China’s Twitter.

In May 2018, a former TV anchor accused Fan of tax evasion. Fan denied the allegations and promptly disappeared. Her fans went into a frenzy. Chinese officials refused to confirm or deny whether Fan was in custody. The New York Times obtained this statement from the Wuxi Public Security Bureau:

The situation is that we all speak with one voice from top to bottom: that is that we don’t accept interviews and we have no comment.

In early October, Fan resurfaced. She confessed to under-reporting her income. She called her actions a betrayal of China.

Was Fan Bingbing a victim of liuzhi? She doesn’t appear to be a Party member or a government authority, but the Chinese film industry is controlled by the state. China Film Group Corporation is a state-owned enterprise. Its subsidiary, China Film Co., has a 58% share in the Chinese movie distribution market. It also

plays a leading role in controlling sale and distribution to movie theaters across the country. It sets the quota for foreign movies allowed to screen domestically, and works closely with the government’s censorship agencies.

Maybe that’s enough of a nexus for liuzhi. Or Fan’s true crime was her conspicuous consumption. Fame, rather than protecting Fan, may have caused her downfall.

While a world-famous actress may be unsafe in China, surely a supercop can protect himself. Shortly after Fan Bingbing confessed, Meng Hongwei disappeared. At the time he was the president of Interpol and the first Chinese national to hold that post.

Meng was last seen leaving the Interpol offices in Lyon, France, en route to China. His wife reported him missing after she received the macabre message “wait for my call” and a knife emoji.

Two days later, Chinese authorities confirmed Meng’s detention under the liuzhi system. Meng resigned from his position at Interpol. We now know that Meng is accused of taking bribes.

Are the bribery charges true or, as some critics claim, is Xi Jinping eliminating his rivals? Just one year ago, the two men were allies. Now there is no question that Meng will be convicted. Maybe he’ll be given a show trial like Bo Xilai. It hardly matters, as China prides itself on its 99.9% conviction rate. A court appearance is no more than a gesture.

If all of this sounds familiar to you, that's because it is.

First, show trials and coerced public confessions are not new in China. You might even say they’re a time-honored tradition since the days of Mao Zedong. Briton Peter Humphrey was jailed on charges of illegally acquiring personal information of Chinese nationals. A confession was the quid pro quo for medical care or release. What inducements would a corruption suspect like Fan Bingbing need to confess?

Second, there is no system of checks and balances in China. All power is political. Even the constitution now says that the liuzhi agency ranks higher than the judiciary and the prosecutor’s office. According to Professor Stanley Lubben, an expert on Chinese law reform, this act of formalism merely confirmed the obvious.

The Party, while formally parallel to the courts, has always been superior in power to all of China’s legal institutions.

In fact, the problem is worse than ever. Professor Lubben calls liuzhi a reflection of

the Party’s paranoid fear of serious weakening by corruption and its deep commitment to control over Chinese society.

Just two months after liuzhi became law, on 8 May 2018, the first liuzhi related death took place. According to the RSDLmonitor:

Chen Yong (陈勇), 45, from Nanping city in Fujian province had been detained for 26 days under liuzhi on a bribery case when the family received notification that he was dead. They said his torso was covered in bruises.

Chen was no corruption suspect. Instead, he was once the driver for someone who is. The scope of liuzhi’s potential victims is vast.

Communist Party members or public sector personnel–virtually anyone working directly or indirectly for the government. Judges, academics and personnel of state-owned enterprises….

The Communist Party has 90 million members. The South China Morning Post adds to that group:

The rich and powerful can no longer buy or bully their way out of trouble, as the cautionary tale of the supercop and the showgirl shows. These days in China no one is safe.

Karen Kao is a poet, fiction writer and essayist based in Amsterdam. This original version of this essay was published on Inkstone Press.