A thespian, a journalist and a politician. Three minority women busting barriers in Georgia 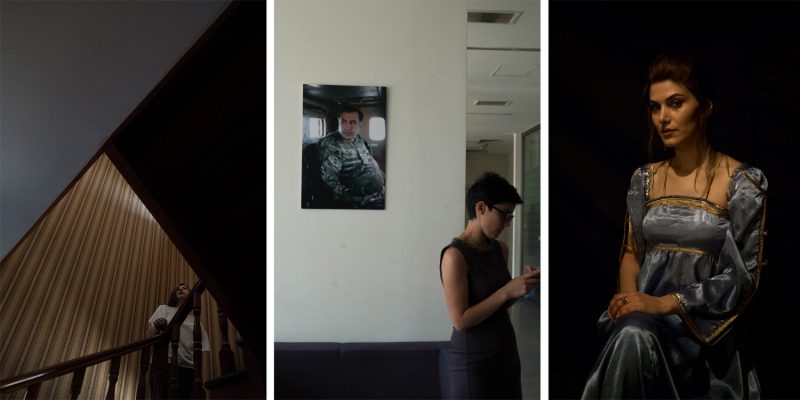 The following is a version of a partner post by Global Voices’ partner Chai-Khana.org. Text by Nurana Mammad. All photos by Elene Shengelia and Ian McNaught Davis.

Throughout the Caucasus, many believe that the community in which you were born determines who you are and what you become. But three ethnic Azerbaijani women in Georgia have found ways to defy those barriers and to craft their own identities as independent professionals. 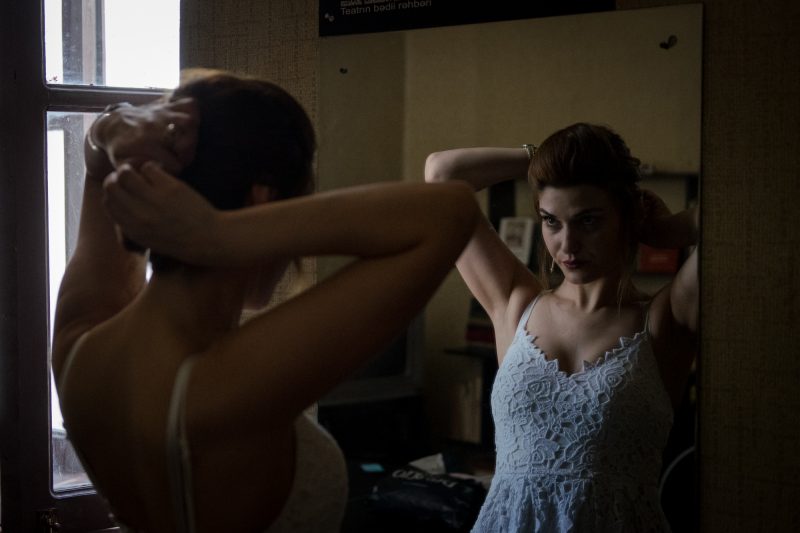 Tbilisi-born actress Aida Tagiyeva, 29, prepares for a rehearsal at the Azerbaijani State Dramatic Theater in Tbilisi. Tagiyeva graduated in journalism, but acting is her real passion.

Aida Tagiyeva is one of just three female actresses who make up the Heydar Aliyev Azerbaijani State Dramatic Theater’s 11-person ensemble. Some people in Georgia’s ethnic Azerbaijani community, she says, believe that, as a woman, she shouldn’t be there at all.

“Society does not normally accept a woman actress who performs in the theatres,” she says of these individuals. “They accuse us of immorality because of our work.” 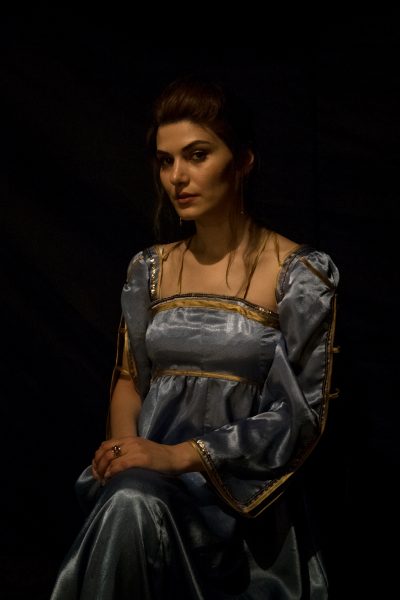 An intense portrait of Tagiyeva in a stage costume. The 29-year-old says she relishes the opportunity that acting gives her to interpret different roles.

With that mentality in mind, the ensemble censors some of its performances, often leaving out love scenes. Tbilisi-born Tagiyeva, who has been acting with the Azerbaijani State Dramatic Theatre since she was 16, laments that “there is no culture of theatres” among those Azerbaijani Georgians who adhere to conservative, patriarchal norms.

“People don’t like plays which will make them think and enlighten them. It’s very hard to force a society which does not like reading to love theatres.” 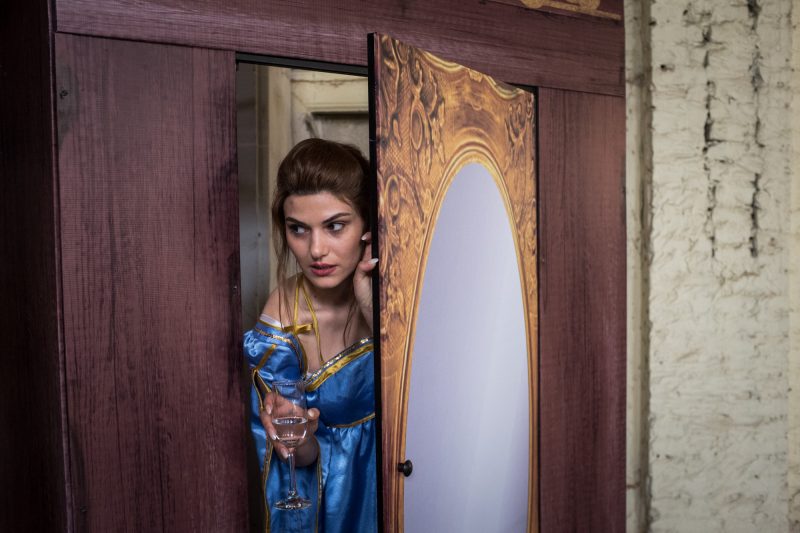 Tagiyeva in a scene of “Under The Ground,” a psychological drama in which she plays the role of Aisha, a mother who confronts the generation divide.Though not a mother herself, Tagiyeva says she feels the role deeply since clashes between generations are common in Georgia’s ethnic Azerbaijani families.

Attendance at the theatre’s performances is sparse, according to Tagiyeva — anywhere from five to 40 people.

With their building in disrepair, the ensemble must perform in other Tbilisi theatres and make its own costumes to save money.

Theatre, though, has not been the only stage for Tagiyeva. With friends, the broadcast journalism graduate co-founded in 2015 a website, Rennesans.ge, to cover Georgian politics and social issues. 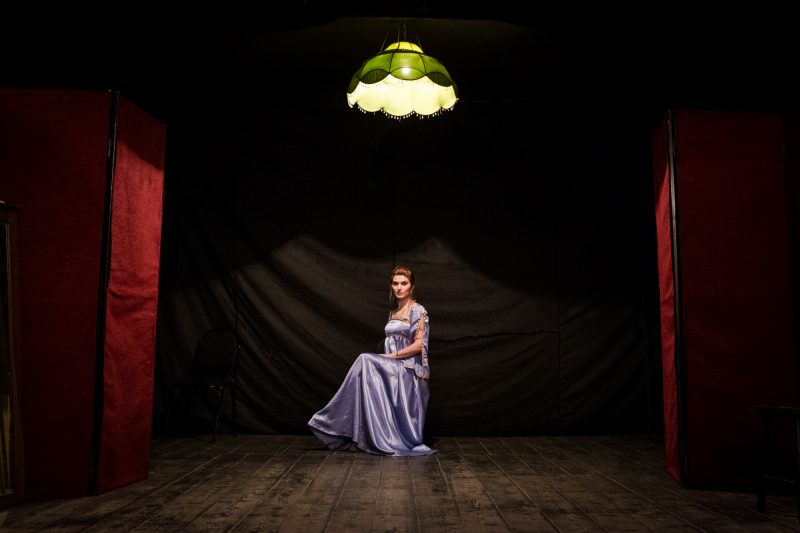 Tagiyeva poses on the smaller of the Azerbaijani theatre’s two stages. Most actors in Georgia struggle to make ends meet. Performers in the Azerbaijani theater earn, on average, 250 – 300 laris ($102 – $122) per month, Tagiyeva says, but that amount has to cover all their expenses, including travel costs.

“This website gave a voice to the society we live in. We wanted somehow to change this society,” she says.

But a backlash from the site’s publication of a cartoon that depicted young people with books walking out of an encaged mosque led to its closure after jut a year.

Threatened by “radical Muslims,” Tagiyeva says she turned to the police. She brought the project to an early end but claims the cartoon was not the reason. 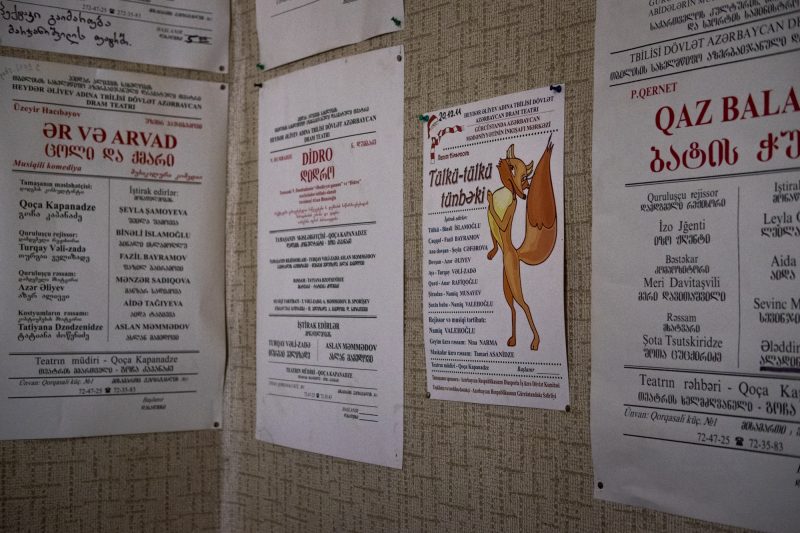 Posters from past performances of the Heydar Aliyev Azerbaijani State Dramatic Theater hang in the theater’s foyer, located in the center of Tbilisi. The ensemble is driven by pure passion – the actors and actresses face hard work, low income and suspicion from those who not value the performing arts.

She has no plans to give up on the theatre. Her identity is as an actress. Though salaries are low (averaging between 250 and 300 laris, or $102-$122, per month), the ensemble puts their hearts into their performances, she says.

“In our theatre, nobody works for money. The theatre is our love. It is hard, but we have to work in order to change our society.” 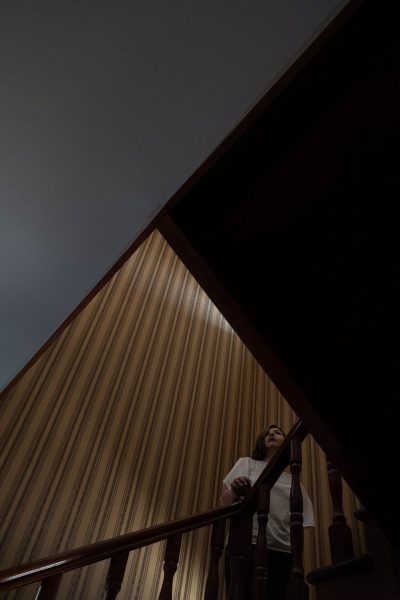 Kamilla Mammadova, 33, in her home in Marneuli, a town in southern Georgia.

Kamilla Mammadova did what many would love to do: she turned a hobby of listening to the radio into a career in her hometown. But, as the founder of Radio Marneuli, the only community radio station in southern Georgia’s predominantly ethnic Azerbaijani town of Marneuli, she has to assert her right to that career every day. 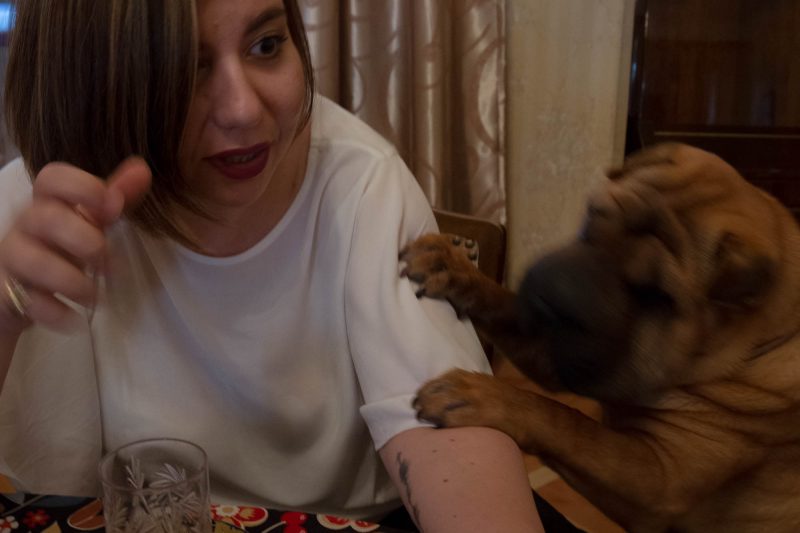 Mammadova with her dog Khanna, whom she calls her child. Unmarried and with two degrees, the 33-year-old contrasts starkly with expectations for more conservative women in Marneuli of the same age.

Her station, established in 2006 as part of a BBC project, covers local news and issues in both Georgian and Azerbaijani. It emphasizes its editorial independence from any political influence and does not shy away from criticizing the government. An open-microphone policy allows anyone to come on air and discuss their grievances. 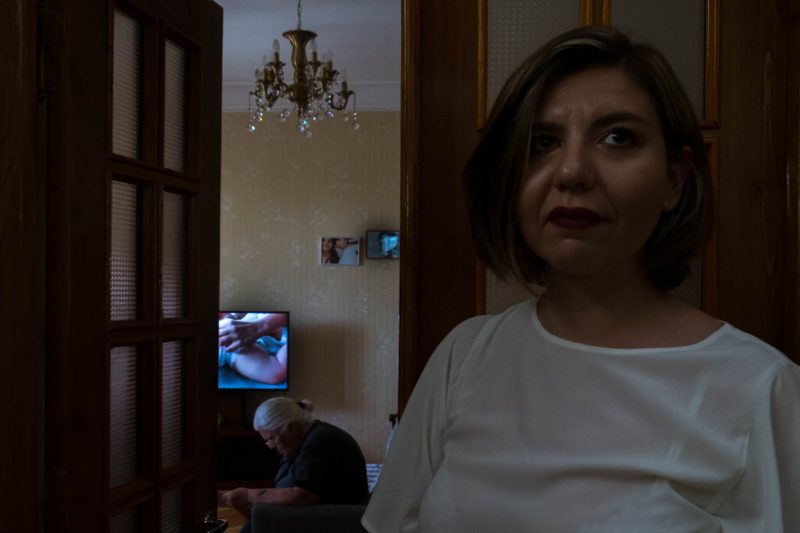 Radio is Mammadova’s passion. She spends most of her day at work and listens to the radio each day before bedtime. “This was my favourite hobby. It turned into a job.”

“There are many problems in our region. It was necessary to bring these problems to the public’s attention.”

For some in Marneuli, however, that spells trouble. 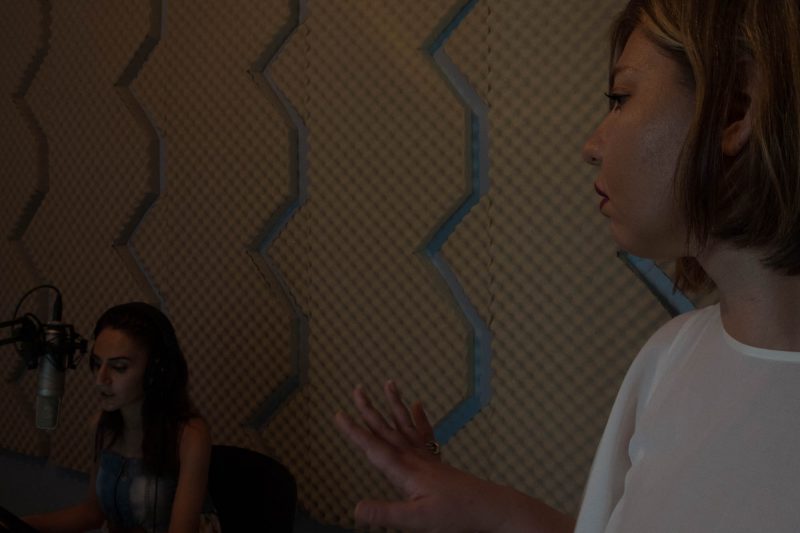 Mammadova with one of Radio Marneuli’s journalists. Until it received an FM license in 2016, Radio Marneuli depended primarily on their website to get their content out. They also handed out audio cassettes and broadcast shows via loudspeakers in Marneuli parks.

More traditionally minded individuals believe unmarried women — particularly those seen as beyond the usual age of marriage — should not assert themselves in public and challenge the government.

Some have asked Mammadova to respect these customs, she says.

“They call me lesbian, immoral,” Mammadova comments. “By using such slander, they try to prevent me from providing accurate information. But this will not happen. I'm a human being and, as a journalist, I will continue to convey the truth.” 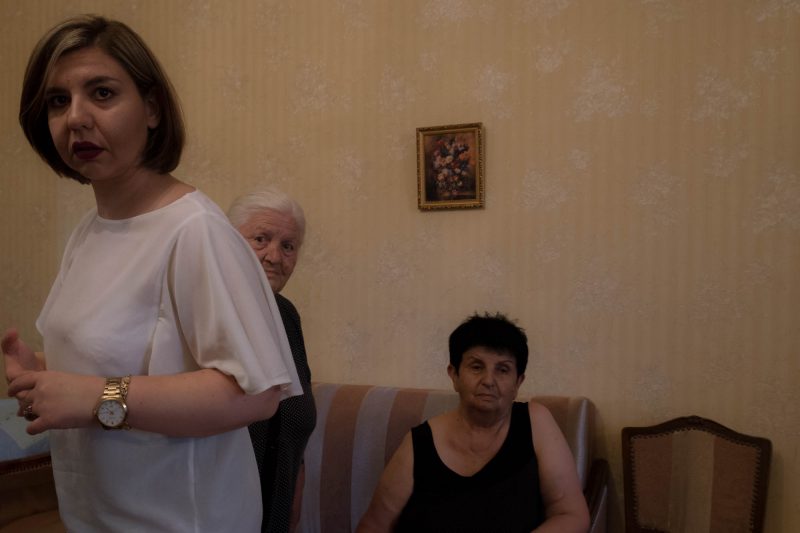 Aside from work, family is part of the reason why Mammadova has never thought of leaving Marneuli, she says.

Mammadova, who holds a double degree in journalism and law, describes her aim as encouraging ethnic Azerbaijanis to speak Georgian and use their knowledge of current affairs to hold the government accountable to voters. 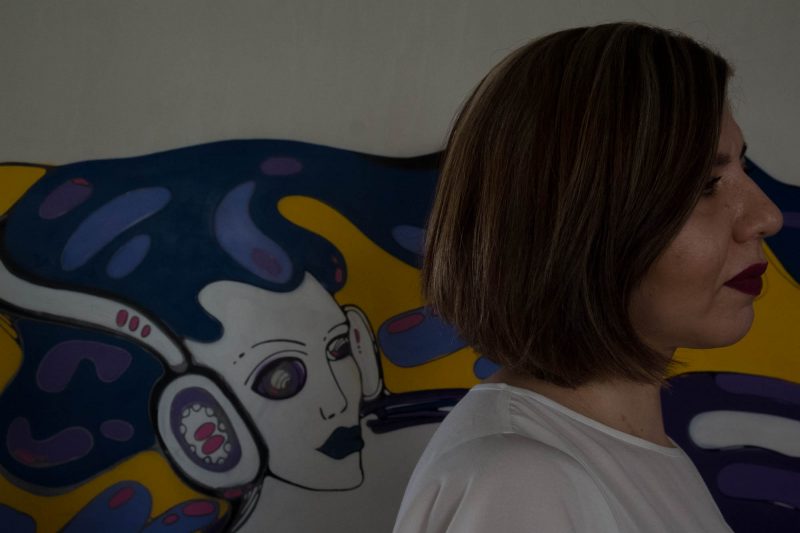 But Mammadova says its commitment to editorial independence has often been at odds with local authorities as well as with those locals who avoid challenging the government.

But doing so required a struggle. Radio Marneuli only received an FM license in 2016.

She believes they still may be, but intends to persevere:  “[W]e are free and we bring the truth to people.” 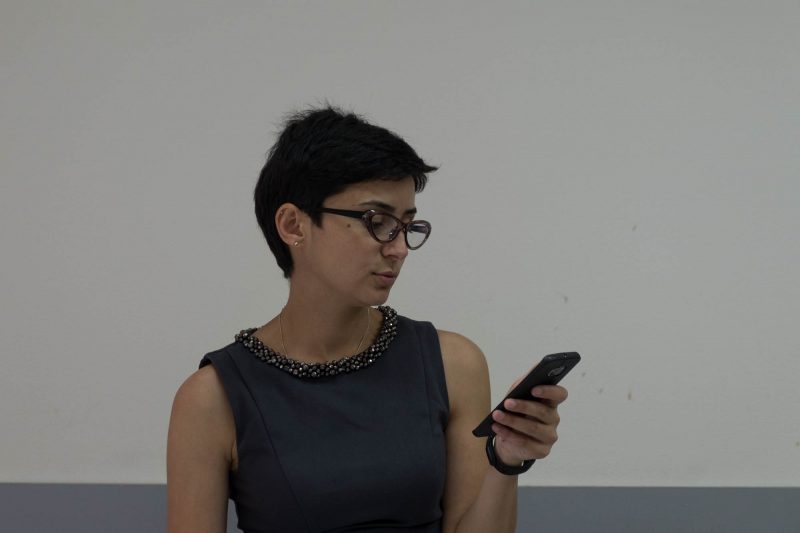 Ismayilova splits her time between the UNM headquarters and her office in the town of Bolnisi.

As the first ethnic Azerbaijani woman in Georgia to head a district branch of a major political party, Samira Ismayilova is used to standing out. But in conservative rural communities in her native district of Bolnisi, that can be a potential handicap.

Ismayilova, a member of the opposition United National Movement, claims that threats and slander about her personal life dogged her 2016 campaign for parliament. This was all part of a broader attempt “to close off female politicians” and “scare me out of the campaign,” she alleges.

That attitude can be common in Georgia in “areas where ethnic minorities live,” she asserts.  “[A]n Azerbaijani woman who has been active in politics in our region is (something) almost never seen.”

Ismayilova wants to change that. 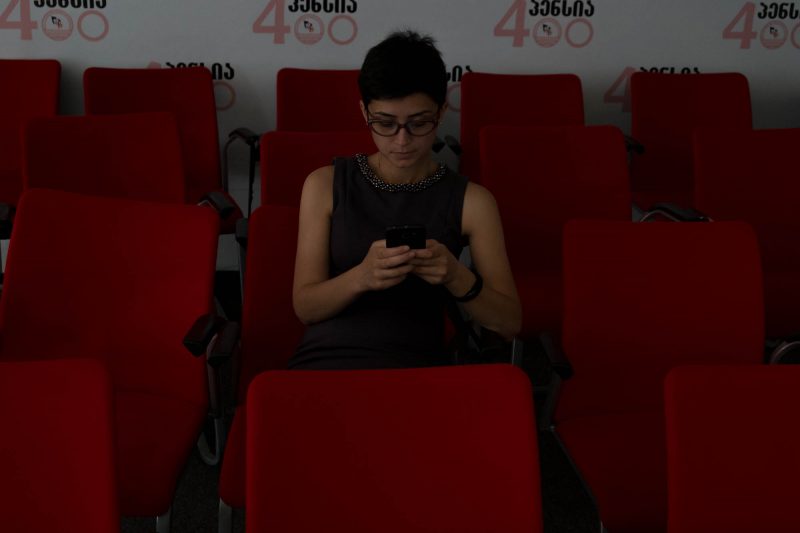 A native of Georgia’s Bolnisi region, 27-year-old Ismayilova got involved in politics as a university student and was elected in 2016 to the municipal council of the town of Bolnisi.

Born in the ethnic Azerbaijani village of Darbazi in Bolnisi, Ismayilova, partly educated abroad, first got involved in politics as a student at Tbilisi’s Georgian Technical University.  After an internship in parliament, she began working as an adviser on ethnic minorities to the education ministry and, later, to former President Mikheil Saakashvili.

Her next step was to become a politician herself. “As a citizen and mother, I want to see a more developed Georgia,” she says. Her 2016 bid for parliament failed, but she now sits on the town council of Bolnisi, seat of the homonymous district. 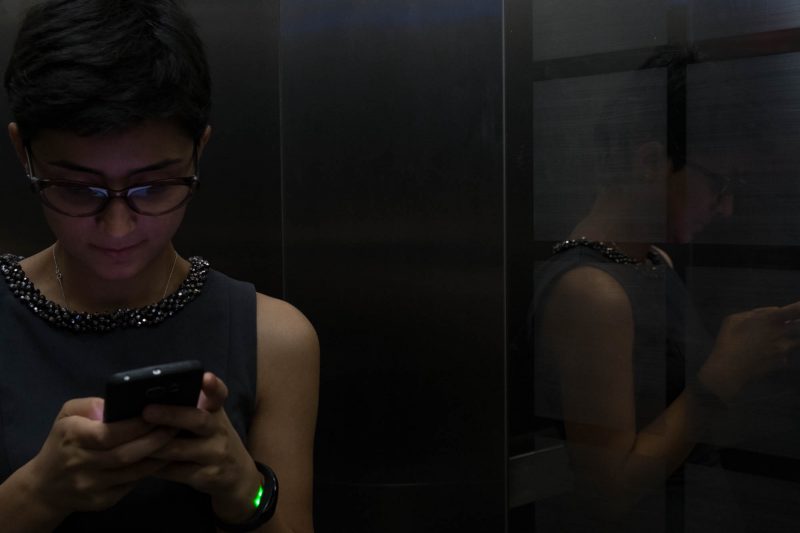 Shown here in the UNM’s headquarters, she is the first ethnic Azerbaijani woman in Georgia to head a district branch of a major political party.

She describes her work as visiting ethnic Azerbaijani villages and listening to residents’ problems with infrastructure, unemployment and education. She tries to prevent early marriages and to prompt ethnic Azerbaijani women to speak out and campaign for change themselves.

Whether her efforts will succeed is unclear, but Ismayilova keeps her focus on the future.

“I believe I can change many things by using my power as a politician.” 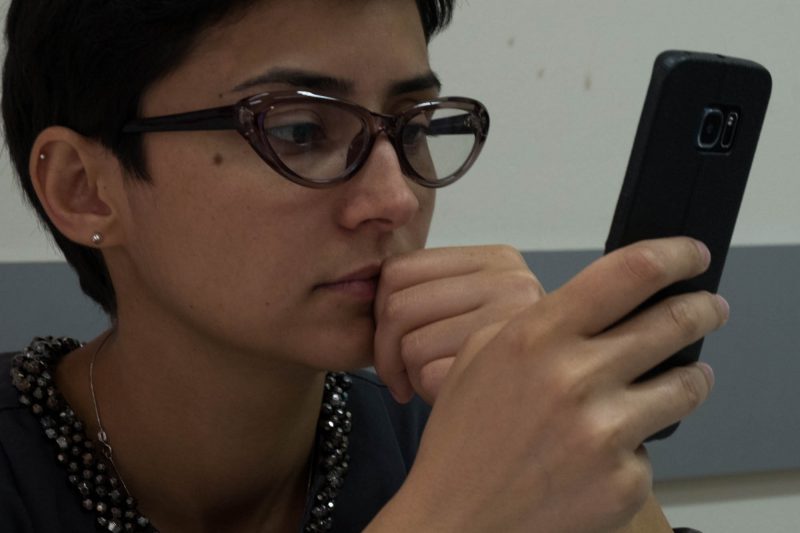 “When I was in the election campaign in 2016, I faced a lot of things. I've come across . . . threats, threats to family members and other pressures. People were discussing my personal life. They are trying to find dirty ways to defame me.”