One dead in Sri Lanka amidst a constitutional crisis 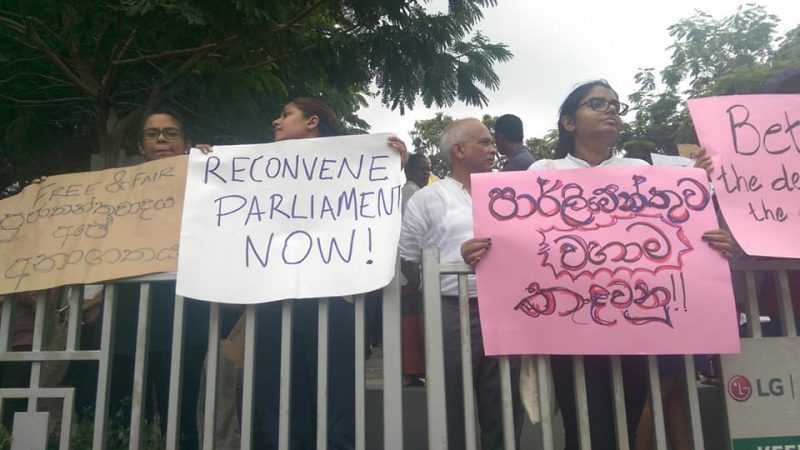 Protesters in the Sri Lankan capital asking the president to reconvene parliament and settle the issue of appointment of Prime Minister there. Image via GroundViews Facebook page. October 30, 2018.

The ensuing power struggle between ousted PM Wickremesinghe and the newly appointed PM Rajapaksa has led to the death of one protester who was shot when the bodyguard of a sacked minister fired at a crowd in the Sri Lankan capital, Colombo.

A constitutional crisis and the death of a protester

The sacking of Wickremesinghe has led to a constitutional crisis in Sri Lanka with many questioning the legitimacy of the President's actions.

The security detail of UNP Leader & sacked #SriLanka PM #RanilWickremesinghe has been reduced to 10 personnel from 1,008 on the directions of IGP. It is reported that the 10-member security detail would be comprised only of Ministerial Security Division members & no STF members. pic.twitter.com/pScTmOKvFy

What has ensued is a power struggle between the newly appointed PM and the recently ousted PM who both believe in the legitimacy of their position. After the news broke, supporters of the two men took to the streets — eventually leading to the death of one protester.

On 28 October, the President dissolved the cabinet of ministers and supporters of  Mahinda Rajapaksa began blocking ministers from the old cabinet from entering their offices. That same evening, a mob prevented ousted cabinet member Arjuna Ranatunga from entering his office, leading Ranatunga's bodyguard to fire live rounds into the crowd.

According to the police, one 34-year-old person died and two others were wounded. The guard was immediately arrested. On 30 October, the police also arrested minister Ranatunga over the shooting incident.

“They tried to kill me, around 50 mob entered with poles & one of them tried to grab the weapon of my PSD officer, Then he shot, There is CCTV evidence, Media can get them and see how they behaved” Arjuna Ranatunga explains what happened pic.twitter.com/4brwA1QliB

Protests in the capital

Hearing about his removal, Prime Minister Ranil Wickremesinghe, reiterated that he had no intention of leaving his post.

“I am still the PM” says Ranil Wickremesinghe. Speaking to News 1st he said he retains the position of PM & the swearing in was unconstitutional- Newsfirst

Wickremesinghe also said that at least 128 MPs in the 225-member assembly have signed to call for an immediate reconvening of parliament. Hundreds of Wickremesinghe supporters showed their support by gathering outside his official home waving party flags and denouncing President Sirisena and newly appointed PM Rajapaksa.

Meanwhile, Rajapaksa’s supporters occupied the state-owned Rupavahini television studios by force because of the station's believed support for Wickremesinghe.

Can #SriLanka and SriLankans spare their lunch break tomorrow, for the sake of our own future? Let us clearly tell the people in power, that a #coup will not be tolerated. This is beyond Ranil or UNP. Lets stand up for ourselves. Our futures!#CoupLK #ConstitutionalCrisisLK #LKA pic.twitter.com/dZMaJhzbVR

On 30 October, thousands took to the streets of Colombo to demand that Parliament be reconvened in order to resolve the ongoing political crisis:

Protest has begun at Liberty Roundabout. Tens of thousands are asking @MaithripalaS to immediately summon Parliament so democracy can be restored. #SriLankanPolitics @officialunp @RW_UNP pic.twitter.com/tDhaRvDzJ9

While the ousted PM saw the protest as an implied call for his reinstatement, other groups saw it as an opportunity to speak out against what they saw as the “proroguing of Parliament”. What remains to be seen is whether or not the next days and weeks will bring more violence.