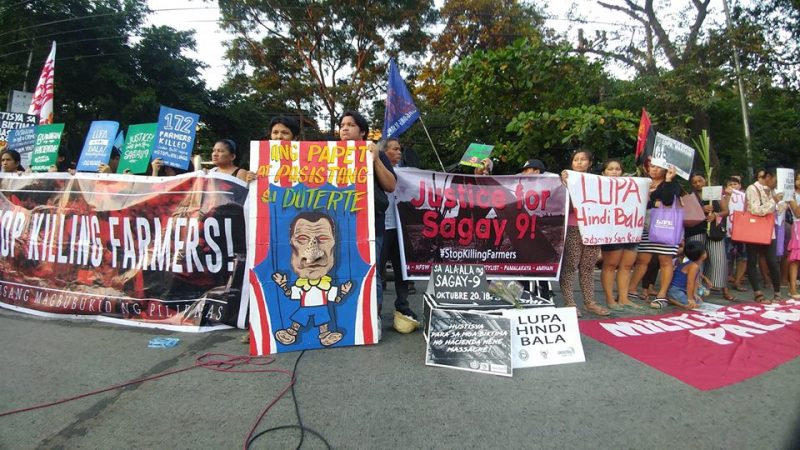 Activists hold a protest outside Department of Agrarian Reform in the national capital to condemn the massacre of 9 farmers in Sagay, Negros. Photo by Anakbayan used with permission.

Nine farmers, including two minors, were killed on October 20 in Hacienda Nene, Sagay City in the central Philippine island of Negros in what could be the single most deadly attack against peasant activists under the Rodrigo Duterte administration.

A fact-finding mission led by human rights and civil society groups have pointed fingers to members of the Special Civilian Auxiliary Army (SCAA), a private militia associated with the Armed Forces of the Philippines (AFP), as the most likely perpetrators of the massacre that is being dubbed “Sagay 9″.

Members of the government-backed paramilitary group rained bullets from M-16 rifles on the farmers as they were having dinner around 9:30 in the evening. Most victims reportedly suffered headshots and three of the dead bodies were doused with gasoline and burned afterwards.

The “Sagay 9” massacre's victims were members of the National Federation of Sugar Workers (NFSW) who were occupying an idle portion of the 75-hectare Hacienda Nene, which the group claims is earmarked for redistribution to farmers under the government’s land reform program.

The farmers had just started a “bungkalan”, a collective farming program that serves to assert their claims on the still undistributed land. They began planting vegetables on the day of the massacre in order to help them survive the “tiempo muerto” or dead season in between the sugarcane harvest and planting seasons.

According to the fact-finding mission, members of the paramilitary SCAA have been notorious for serving as gun-for-hire mercenaries on behalf of big landlords like Hacienda Nene’s landowner Carmen Tolentino and its arriendador or leaseholder Allan Simbingco. The two are in fact close relatives of Negros Occidental Governor Alfredo Marañon Jr. and Sagay City Mayor Alfredo Marañon III.

Negros is known for the persistence of the haciendas, vast landholdings from the time of Spanish colonialism which were first introduced in the island for cultivating sugarcane.

The NSFW has documented 172 killings of farmers, including 45 in Negros alone, in Duterte’s two years in power. The intimidation and violence against farmers serves, the group says, to perpetuate exploitative conditions:

On December 21, 2017, NFSW-Sagay City Chairperson Flora Jemola was stabbed to death by suspected paramilitary men. Ronald Manlanat, an NFSW member in Hacienda Joefred in Sagay City, was murdered on February 22, 2018. An entire magazine of an M-16 rifle was emptied on Manlanat's head.

Sagay Massacre is the 13th massacre under this regime. pic.twitter.com/s0thzvpNyX

In the aftermath of the Sagay massacre, government, military, and police spokesmen have all joined together in accusing the Communist Party of the Philippines (CPP), its armed wing New People’s Army (NPA), as well as the NSFW itself, for perpetrating the killings.

The Philippine National Police (PNP) has filed multiple murder cases against Rene Manlangit and Rogelio Arquillo, two NSFW union organizers who supposedly deceived the victims into joining the land occupation as part of a conspiracy to spark outrage against the government.

The AFP has claimed that the killing of the nine farmers is part of a “sinister plot” to oust President Rodrigo Duterte from power. But various human rights and civil society groups have belied this claim, asserting that the authorities are pushing that narrative in order to cover-up its own involvement in the bloodbath.

President Duterte himself, in a speech delivered on October 28, warned farmers involved in land reform disputes from resorting to land occupations, saying he has issued an order to the military and police to arrest and kill all those occupying public and private properties.

My order to the police is to shoot them. If they resist violently, shoot them, and if they die, I do not care.

When #DutertesMilitary says the NPA is their prime suspect in THE KILLING OF 9 FARMERS, including a child, who believes them? Because why would the NPA kill farmers? What would they gain? Meanwhile the landlord that gains from farmers’ oppression, THEY ARE NOT SUSPECTS? #SPIN

“I stood up and tried to run back but bullets were flying. I crawled, trying to huddle as close to the ground. I prayed for my son.”– Bobstil Sumicad #JusticeForSagay9 #StopKillingFarmers pic.twitter.com/zIWGlW8UIT

This is the map I've been doing for my cartography class. It shows how big the land monopolized by landlords and corporations is. Behind all of these is the everyday suffering of farmers.

What's not so right about this country is aside from our food producers are getting killed for standing up for their rights, it's already 2018 and yet spanish-introduced haciendas still exist! #EndFeudalism #StopKillingFarmers

The state is a butcher of farmers!