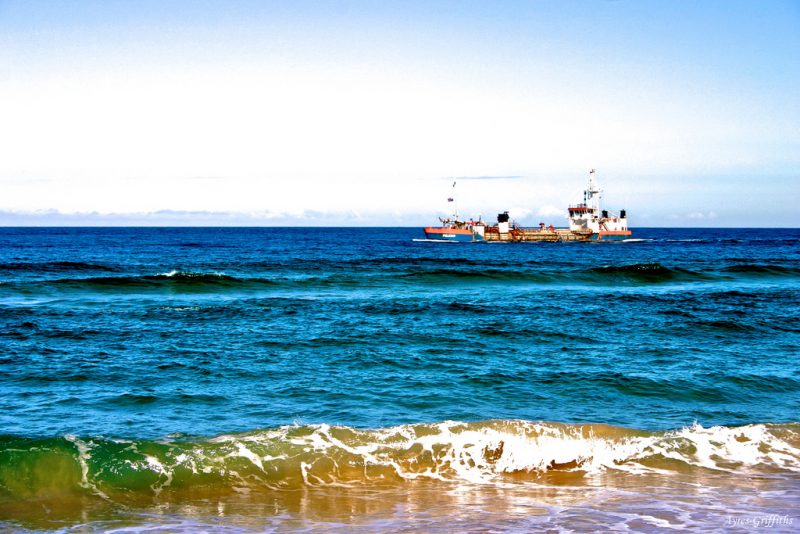 Photo of a ship cruising by the littoral entitled “Passing Through,” taken by Melody Ayres-Griffiths in July 2010 via Flickr, Creative Commons.

The Intergovernmental Panel on Climate Change (IPCC)'s last report, commissioned during the COP21 conference in Paris and released on October 6, 2018 in Incheon, South Korea, offers an alarming perspective on the effects of climate change in general and on the oceans in particular: a temperature increase of 2 degrees Celsius (3.6 degrees Fahrenheit) would lead to near total annihilation—around 99 percent—of coral reefs. The urgency is great and the pressure on global leaders to act is increasing.

Surfrider is an association created in 1986 by surfers from Malibu, California (USA) who were angry about bacteriological pollution and litter in the water. Member Tom Curren, three-time world surf champion, brought Surfrider to Europe in 1990.

Today, it gives citizens a voice on ocean conservation from a European perspective. With a few months left before the European parliamentary elections, Surfrider Foundation Europe is conducting a continent-wide, multilingual online consultation, so that citizens can weigh in on the debates and crucial upcoming decisions on marine conservation and exploitation.

Global Voices (GV): Who makes up the European branch of Surfrider?

Agathe Clerc (AC): Surfrider Foundation Europe's members are people from all backgrounds who share a passion for the ocean and are concerned about protecting it. It comprises a network of 1,700 volunteers, 10,500 members, and 120,000 supporters gathered in active local chapters in 11 European countries.

GV: What are the main threats facing the marine environment in Europe?

AC: Whether in Europe or on an international scale, the dangers affecting the ocean are unfortunately the same. Surfrider Foundation Europe's work focuses on three main areas of threats to the marine environment and to humanity: marine litter, water quality, and user health; adaptation to climate change; and coastline management.

GV: Why was the European consultation “Voice for the Ocean” launched?

AC: The VFTO idea came from an observation: the disconnection between European institutions and citizens. While 44 percent of French citizens voted in the European elections in 2014, Surfrider wants to mobilize all European citizens to participate in this oft-neglected democratic process, and place the ocean and its protection at the center of the debates.

The ocean is borderless, and so is the impact of the decisions related to it. The EU adopts measures that apply to the member countries and will thus have direct local effects. With the VFTO consultation, Surfrider is reaching out to the entire European community. Citizens need to express themselves in order for ambitious measures to be taken regarding protecting the ocean.

The future of the ocean is also being decided in the European Parliament. We believe that it is necessary to connect European citizens and ocean lovers to the political sphere in order to discuss, make progress, and protect the ocean together. 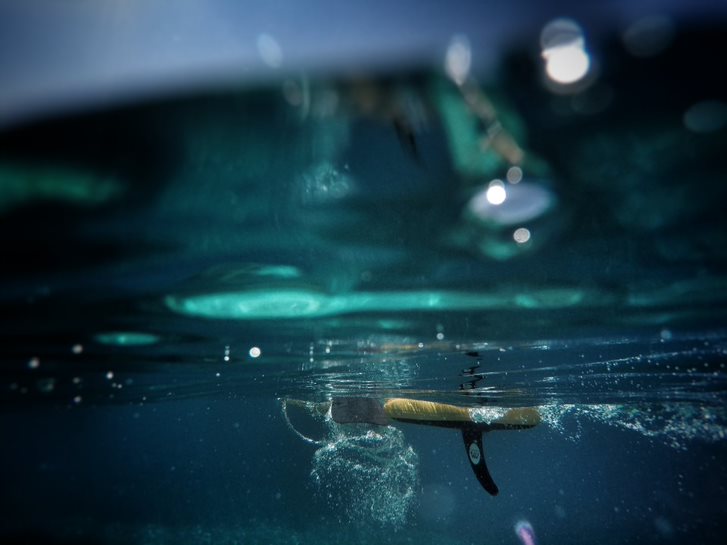 Photo of a surfer taken below the sea. Image provided by Surfrider Foundation Europe, used with permission.

GV: How did you design this consultation campaign?

AC: We selected eight priorities that affect every one of us: water quality, plastic pollution, maritime transport, sustainable tourism, offshore platforms, renewable marine energy, climate change, and ocean literacy (the sharing of knowledge about the ocean). In responding to the consultation, citizens are expressing the concrete actions that they expect from the European Union on each of these topics. Is it more restrictions? More information? Awareness? Research?

For each topic, we provide background on the situation via a text, a video, or an infographic. The level of the information varies according to their profile (expert, citizen, teacher, or participant in water sports). The visitor thus has enough information to answer the question.

We created a multiple-choice questionnaire — boxes to check or items to put in sequence — in order to facilitate analysis of the responses afterwards, and to limit how long it takes to respond to the consultation (ten minutes on average). The last question is decisive: Choose the most pressing, in the respondent's opinion, of the eight priorities mentioned.

AC: Today, the computer is showing 3,500 responses. The majority are from France, but Germany and Spain are present too. The consultation is available in six languages: French, English, Portuguese, German, Spanish, and Bulgarian.

GV: What will you do with the results of this consultation?

AC: Starting at the beginning of 2019, Surfrider Europe will aim to amplify citizens’ voices and challenge each political party in the European elections to include concrete ocean protection measures in their platform.

GV: Are there major differences in perspective between European countries?

AC: We don't have access to the responses yet, but we already know that not every country has the same priorities. For example, we were able to do a phase of VFTO in Malaga, Spain. Through discussion with people who live there, it quickly became evident that residents’ main worry comes from cruise ships docking in their port — more tourists every year — and public infrastructure [is] not always able to support them. The consultation includes questions about sustainable tourism and changes in marine transport. I don't think I'm wrong in assuming that those two topics will take priority in Spain. Those priorities may not necessarily be the same for people in Germany or Holland.

GV: What is Surfrider's position on the use of the oceans (by surfers for instance) and environmental considerations? Are they always compatible (for example, sharks and surfers)?

AC: That's one of the most interesting questions at the heart of our mission. The main objective of our association remains the preservation of the ocean, because without a healthy ocean, surfing or any other water activity would be impossible. Surfrider will continue to advocate for the preservation of the environment and of its users, in a coordinated effort with local actors.

Regarding the shark crisis, we're participating in the collaborative process already underway. Most importantly, we want to understand the causes of the disruption of this ecosystem so that the relevant decisions can be made with everyone involved.

GV: You're also developing a blog on ocean literacy. Are technology and social networks essential tools for environmental conservation today?

AC: Surfrider Foundation Europe is developing a large platform, Ocean Campus, that will host various teaching tools. Digital communication is at the heart of our information and awareness strategy. Considering how widespread technology is in our culture, it's an essential medium to reach as many people as possible. Because it's accessible to everyone, digital communication allows us to create and promote an engaged and ecologically responsible lifestyle using multiple creative and interactive tools.

GV: Why should European citizens participate in this consultation?

AC: Participating in VFTO gives you access to high-quality information on the problems threatening the ocean. We're expressing ourselves and mobilizing for the protection of the ocean, and we're exercising our right to influence future European policies, which will have direct effects on the member countries. The European elections will be decisive, determining the direction the EU will take regarding ocean conservation. It's time to make your voices heard!