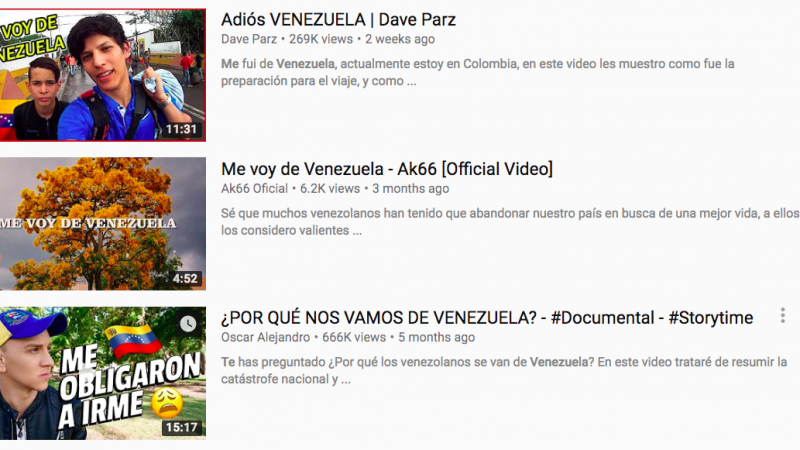 Screenshot of numerous video testimonies by young people who are documenting their journey as they leave Venezuela.

It is difficult to determine exactly how many Venezuelans have left their country.

What can be seen is the increase virtual support networks and everyday Venezuelans who are taking to social media to share their stories, recommendations, and personal reflections as they make their way out of the country — giving a voice and a face to the dire statistics.

Personal stories and networks of solidarity

Yosy, a 23-year-old Venezuelan woman, is one of the many people who seek to record their stories and to help others embarking on the same journey. On her YouTube channel, she describes her migration experience, first to Panama and then to Argentina. In addition to her adaptation process, she also reflects on the reasons she decided to leave:

Dozens of YouTube videos with titles like “My trip to Peru without a passport“, “9 Tips for Getting to Cúcuta, Colombia from Venezuela” and “My journey by land to Chile from Venezuela” are available through a simple search. All of them contain personal stories illustrating the Venezuelan exodus and act as a guide for those planning to do the same.

In each video, viewers can see the hardships and risks for those traveling by land. For example, in her “9 Tips”, Youtube user Oriana shares the potential risks that people can encounter in bus terminals as well as ordeals with legal documents:

From Cúcuta  to Bogotá, or any nearby city, there should be at least 20 checkpoints where the immigration police get on the bus, check IDs and see if passports are duly stamped. [All] due to uncontrolled Venezuelan immigration into Colombian territory […] In the Cúcuta terminal you have to go to the basement if you want to store your luggage, shower, or use the bathroom. You have to be strict with this: the basement is the only zone that is almost safe. Areas outside of these terminals are extremely dangerous…

Meanwhile, a number of Venezuelan communities abroad have created Facebook groups, and use Twitter and other social networks to give support and advice in destinations like Colombia, Ecuador, Chile, and Spain — a virtual solidarity network for those who must leave their country.

Other means of help

The situation for Venezuelans leaving the country has worried some NGOs that support migrants. Among them, the Jesuit Network for Migrants and the Jesuit Service for Refugees from Latin American and the Caribbean who have designed a “virtual map” in order to help with people's safety while traveling to Brazil, Colombia, Ecuador or Peru. The project is another example of the magnitude of the Venezuelan exodus, now considered to be the largest in the region in the last 50 years. 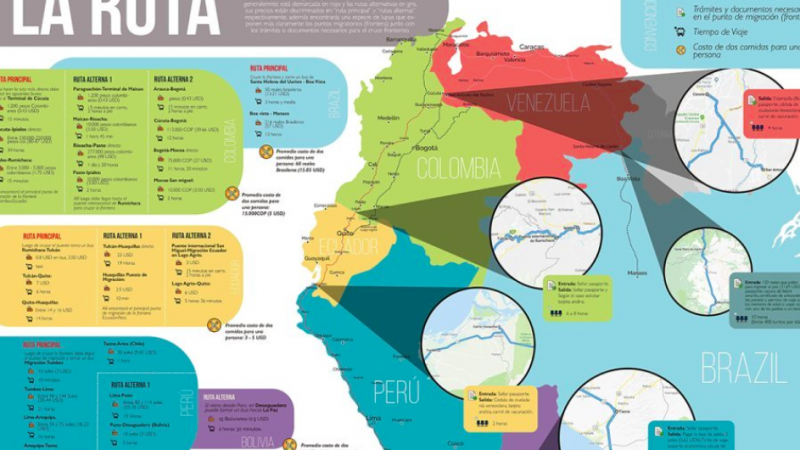 Detailed “virtual route” developed by the Migrant Jesuit Network, the Jesuit Service for Latin American Refugees, and The Caribbean in order to help immigrants. The guide shows data and organization information that can help those undertaking the journey from Venezuela to other countries in the region. It also has a list of information about transportation prices, times, and routes.

Apart from the route itself, it's important to remember the harsh conditions that Venezuelans face as they prepare their travels. On the one hand, there are complicated and numerous limitations when accessing legal documents. Being able to hold a passport, for example, can mean waiting up until two years or paying extra to get it printed or renewed. On the other hand, the spectacular and unstoppable hyperinflation (projected to reach a million percent in 2018) that makes any budget change significantly by the day.

It remains to be seen what solutions could help solve the immense challenges taking place inside and outside the country. So far, as the numbers behind the exodus (as well as the tensions with neighboring countries) continue to rise, the Venezuelan migration phenomenon doesn't show any sign it's slowing down.