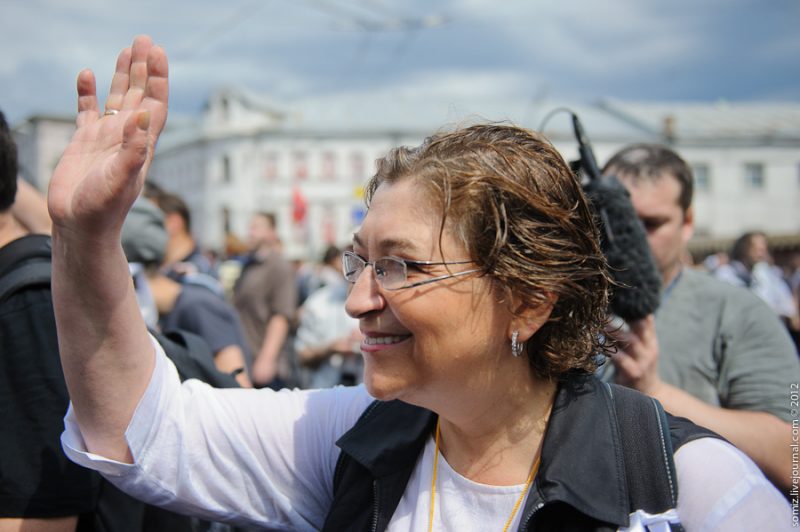 Yevgeniya Albats is a Russian investigative journalist, political scientist, writer and radio host. Her magazine, The New Times, has been heavily fined for failing to report to Russia's government media watchdog on time. Photo by Evgeniy Isaev (CC 2.0)

The New Times, an independent website and former magazine with a distinctly critical voice, has been slapped with a record fine of 22 million rubles (USD $334,400).

This is a crippling sum for a small media outlet in Russia. For comparison, the investigative journalism outlet MediaZona, which is similar in size and scope to The New Times, raises just below one million rubles (USD $15,200) per month, which is barely enough to cover their operating costs.

Alexey Venediktov, the editor-in-chief of Echo of Moscow, the first independent radio network in post-Soviet Russia, broke the news on his Telegram channel:

The New Times magazine and Yevgeniya Albats [The New Times’ editor-in-chief] have been fined by a magistrate court for 22 million rubles for failing to submit a report to Roskomnadzor [Russia’s government media watchdog].
It obviously means bankruptcy and imminent closure for the magazine.

Venediktov reminded his followers that on Monday, Yevgeniya Albats hosted an interview on Echo of Moscow with Alexey Navalny, Russia’s leading opposition activist.

The New Times was fined under a rarely-used law in the Russian administrative code that requires media outlets to report any foreign sources of funding to Roskomnadzor, Russia's media regulator. No statistics of other instances of its usage are available, but MediaZona notes that similar media law violations have accrued a total of just above 7 million rubles ($106,400) in fines since 2015.

The law requires Russian media outlets that do accept foreign grants or donations to file quarterly reports to Roskomnadzor — but sometimes they’re given less than no time to do so. Earlier this year, The New Times received a request from Russia’s attorney general office to report on their foreign funding. The request was issued on May 10, but with a reporting deadline of May 7.

Introduced in late 2015, the law came as part of a package of legislative measures directed at independent media outlets, civil society groups and NGOs. Within Russia's increasingly labyrinthine regulatory structure, it has become all too easy for organizations to run afoul of “three strikes and lose your broadcasting license” rules, or to face fines for things like failing to to clarify that ISIS is a terrorist organization banned in Russia every time it is mentioned in an article.

Although these laws and regulations were written as part of an agenda to prevent terrorism, extremism and other grave crimes, authorities’ enforcement of the rules suggests that independent journalism may have been the real target: no pro-Kremlin outlet has been warned or sanctioned under them.

When combined with advertisers’ reluctance to buy ads from politically risky publications, small media outlets like The New Times that aren’t directly or indirectly owned by the Russian government find that they are always teetering on the edge of survival.

In Russia, there remain relatively few legal avenues for making money through advertising or selling print copies. The New Times stopped its own print edition in early 2017, going fully digital after continued issues with distribution, and eventually accepting some donations from outside of Russia, and thereby confronting the possibility of a slow death by bureaucracy.

And alongside these regulatory impediments to operation, there's the steady stream of violence, threats and intimidation against independent reporters in Russia, like last week's grisly “gifts” delivered to the doorstep of another prominent newspaper, Novaya Gazeta.