Education in transition: how transgender teachers are transforming schools in Brazil and Colombia 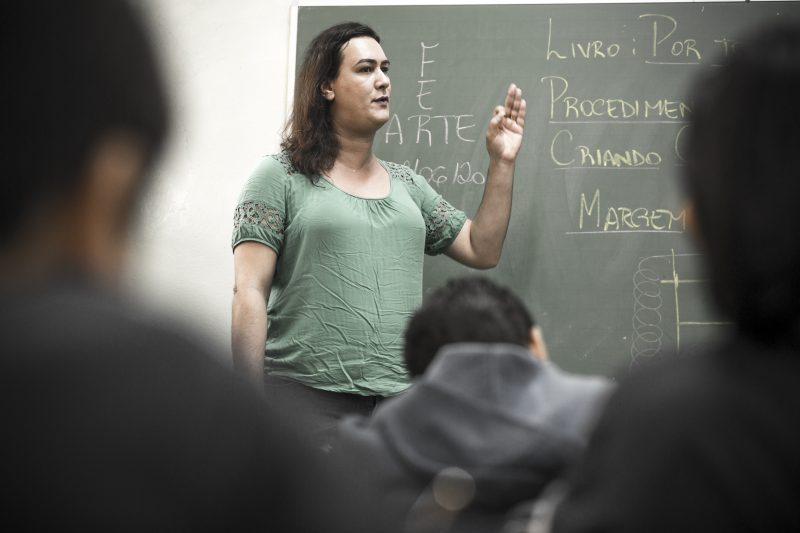 Fernanda Ribeiro teaches primary and secondary level art at a state school in the interior of the state of São Paulo, Brazil. PHOTO: Toni Pires. Used with permission.

Leona Freitas is a typical Brazilian peasant woman. Her daily life revolves around a few close friends and her partner. Her dreams are not very big: she wants to buy a house and live a quiet life. She has rarely ventured out of Congonhas, the town where she was born and works. She has never visited a big city. São Paulo is a distant dream for her. Belo Horizonte, the capital of the state of Minas Gerais, is just 80 km from her hometown and it’s on her wish list to visit it. “I will go there when I can,” she says.

Congonhas is a tiny historic town known for its religious festivals, which attract thousands of Catholics from all over the country. With its many churches and Christian schools, it is similar to hundreds, perhaps thousands, of South American cities: religious and conservative.

Leona is a transgender woman. She made her gender identity public after graduating from her studies in Pedagogy. To qualify as a school teacher is only possible through a public tender. “I don’t know if I could ever find work at a private school, because most of them have ties to parts of the Catholic or evangelical churches,” she says.

So Leona teaches in a public school. Her life there is not easy. She is the only transgender teacher in this city of 50,000, and can feel the discomfort experienced by her work colleagues. But she isn’t intimidated by them—on the contrary. She believes she has already made a major accomplishment: to be referred to by the female honorifics. “They are still struggling to call me ‘Leona’. They call me by my birth name instead of my name of choice: Miss Albert,” she explains. 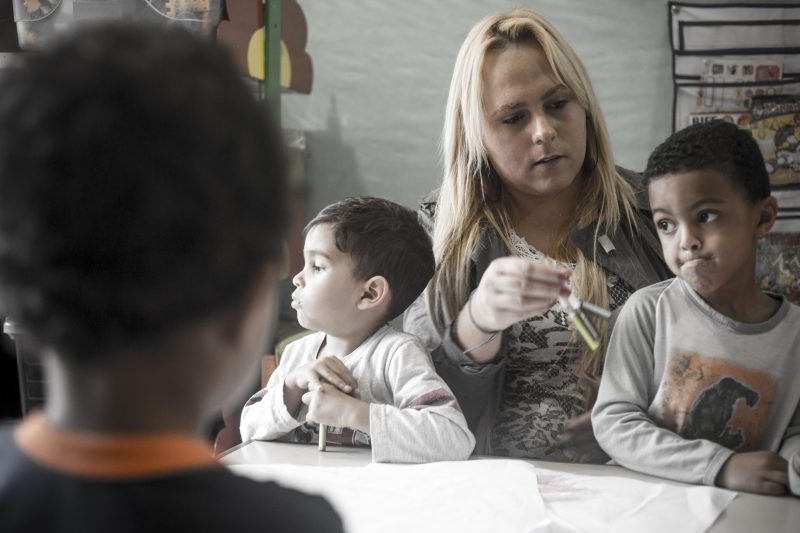 Leona Freitas is the only transgender teacher the small Brazilian city of Congonhas. PHOTO: Toni Pires. Used with permission.

In [many countries in South America, discrimination still prevents people who do not identify with the sex they were assigned at birth – the sex listed on the birth certificate – from being adequately represented in politics, positions of leadership, and ordinary jobs as a driver, salesman or cashier.

In schools, this representation is even smaller. For the average South Americans, the role of teacher is still considered a position of authority. “Nobody expects a transgender person to be a teacher. It seems that there is an incompatibility between these two imaginary ideas,” says Alanis Bello, a transgender teacher at the National Pedagogic University in Bogotá, Colombia. 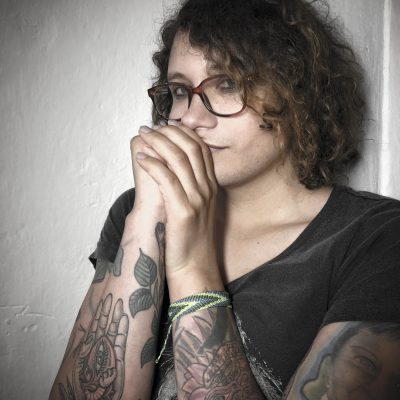 Alanis Bello: “I love to excite the students’ curiosity. I came to university wearing high heels, totally made up, super drag. Their jaws dropped in astonishment.” PHOTO: Toni Pires. Used with permission.

Ana Paula Braga Luz , a volunteer professor at the TransPassando Project in Fortaleza (Brazil), agrees that being transgender is exceptionally complicated. “Most people have the idea that transgender and transsexual educators are going to sexualize children and turn the children gay, lesbians or transgender,” she says.

There is little official data on how many transgender people work in public education not only in South America but throughout the world. This population is generally under-­studied, or not reported on at all, and demographic research rarely takes­ gender identity into account.

But transgender people are gaining visibility thanks to the media and the internet. The Brazilian Institute of Trans Education (IBTE) has been using social networks to connect transgender teachers in the country. Led by the transgender educators Sayonara Nogueira and Andréia Cantelli, IBTE undertook an online survey in 2017 to find how many trans professionals there are working in schools. “We found 90 teachers, but I believe there are many more,” says Sayonara. “We were struck by the story of four transgender men who identified themselves as lesbians because they were afraid they would not be accepted by the school’s staff and students.”

Long isolated, trans teachers are finding strength in numbers. “We’re strengthening the network. We seek educators to empower them and to let them know there are legal norms that protect them, so they don’t need to hide who they are any longer,” says Sayonara, who is vice president of the organization. “We also help them address gender identity and sexual orientation in the classroom by providing them with lesson plans.”

At the beginning of each school year, when she receives new students, the Brazilian teacher Fernanda Ribeiro makes a statement: “I am a transvestite .”

“That’s how I break the gossip and make myself available to have conversations,” she says. The students end up receiving extra-curricular education about gender identity. “I often joke that I am an itinerant research subject because it results in deconstruction in every sense: of stigma, of stereotypes.” Today, Fernanda is no longer “the transgender teacher”. She's just Teacher Fernanda, “a little strict, but really cool.”

Gradually, trans educators are breaking down prejudice. Blasia Gómez Reinoso retired in 2017 after 35 years as a teacher and director at a college in Catamarca, a small city in Argentina. She transitioned in 2012 and tears come to her eyes when she remembers the moment she made the announcement to her students.

“They followed my transition step by step. I've been explaining everything to them. When I first came out as transgender, I felt like the most loved person in the world. The boys applauded, and the girls cried,” she says, reliving those times. “I discovered that children are open-­minded. It’s us, the adults, who often have trouble accepting sexual diversity.” 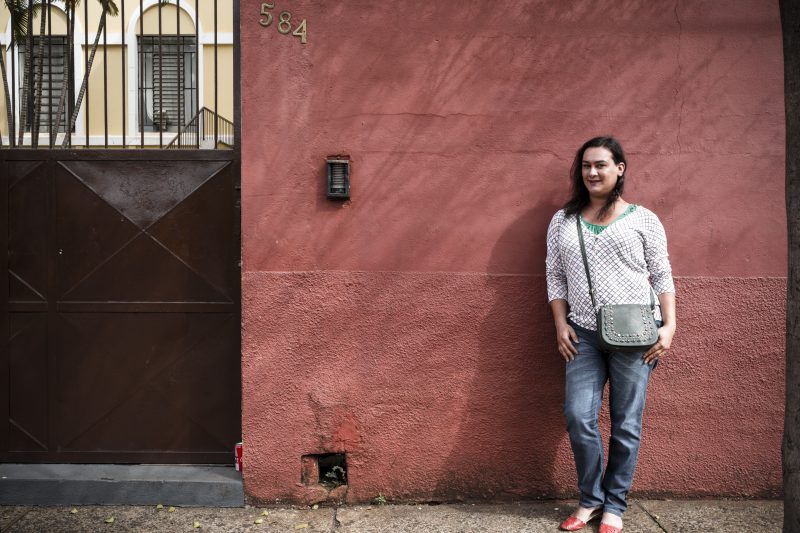 Fernanda Ribeiro's students followed her transition step-by-step. “”I discovered that children are open-­minded. It’s us, the adults, who often have trouble accepting sexual diversity.” PHOTO: Toni Pires. Used with permission.

The Colombian Alanis Bello says that she had to fight to get her job at the National Pedagogic University. “My birth name is Jason,” she says. “I didn’t want to change my documents.” Her students expected to find a man as their teacher. “I love to excite the students’ curiosity,” says Alanis, who is a sociologist. “I came to university wearing high heels, totally made up, super drag. Their jaws dropped in astonishment,” she laughs. Little by little, she built a network of alliances with students, teachers and other sectors of the institution. Alanis explains that teaching from a transvestite perspective is about healing. “It’s a healing and poetic pedagogy because it tries to repair the wounds of hate, anger, and discrimination that everyone who has a body experiences in the education system, not only transgender people.”

She says that it has led to changes. “I’m helping to train future educators who think an education differently, who question themselves and let themselves be affected by the magic of transvestism.”

Laura Morales, one of Alanis’ students, says that the experience of having a transgender teacher —or profe, as the Colombians say—was shocking and transgressive to her way of thinking and feeling. “It was wonderful,” she says. “When you arrive at a place like a university and you meet a person with whom you connect not because of their gender but because of their humanity. . . and whose appearance makes you say to yourself: well, she's physically striking but it's her smile, her being, her intellect that is most endearing. You begin not to see her in terms of gender any more, but as a human being. It's been crucial because I’ve learned that there are not only two options, but a thousand ways to take, think and feel.”

This report was funded by  The European Journalism Centre.