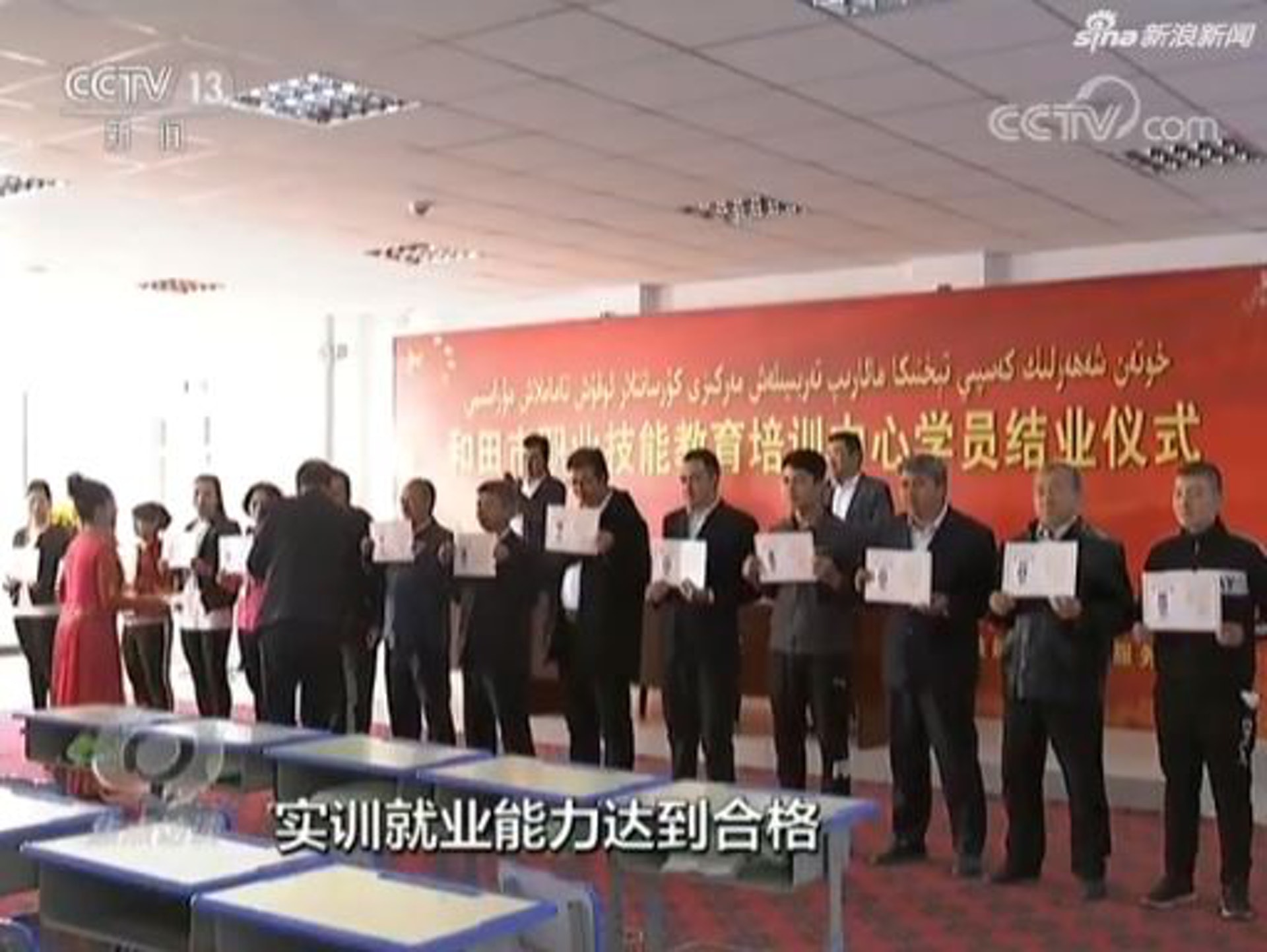 “Graduates” would receive a certificate after they finished the “vocational training”. Screen capture from CCTV.

As international media and human rights organizations unveil details about re-education camps in Xinjiang, where Chinese authorities may have imprisoned up to a million Muslim citizens without charge, the Chinese government has switched its public relations tactics from denying to defending the camps.

China's government has been under fire in the past year over allegations that it was forcibly detaining Uyghur Muslims in Xinjiang for “extremist behaviour”, a language often invoked to describe any vaguely religious conduct, from growing a beard to wearing a headscarf.

What happens at the camps is not widely known, but testimonies from ex-internees reveal that they were forced to convert their beliefs and pledge loyalty to the Chinese Communist Party (CCP) and made to criticize their own culture and religion, as well as adopt diets against their own will. They have also reported that the camps are secured with barbed wire, surveillance systems and armed police.

Initially, China's approach was to deny the existence of such camps. As recently as August 2018, shortly after a UN human rights panel brought attention to the matter, a Chinese delegation said that “there is no such thing as re-education centres in Xinjiang”.

Less than two months later, the camps were made official. On October 9, the local Xinjiang government revised its “Regulation on Anti-Extremism” to empower local authorities to operate “vocational training centres” for the purpose of education and ideological conversion. In other words, the new regulation has legalized the existence of the “re-education camps”.

The new strategy was almost immediately reflected on Chinese media and social networks, where many have applauded the policy.

On October 16, the China Central Television aired a feature report and interviewed some “graduates” from such centre in Hotan, Xinjiang. One of them said:

If I had not come here, I would follow the religious extremist and become a criminal.

Also on October 16, party-affiliated media outlet Global Times published an editorial stating that Xinjiang's anti-extremism measures were actually a “humanitarian move” to prevent an ethnic cleansing disaster, and should be regarded as a successful model by the rest of the world:

Xinjiang has strengthened its governance to prevent extremism from happening like in other parts of the world. It should be considered a good model for resolving high-risk conflict situations. […] From Bosnia and Herzegovina to Kosovo, and from Liberia to Syria, the tragedies are distinctive but also similar. Many people in these regions have died, many more became refugees. The West has had great influence in the unrests and have paid and are still paying the price. Does the West really want to see another humanitarian disaster that shocks the world and exports tens of thousands or even millions of refugees?

Chinese officials didn’t reveal the true number to avoid falling into the stats trap, giving Western media another excuse to hype up the issue.

The one million figure is an estimation by the UN Committee on the Elimination of Racial Discrimination, who say they have received many credible reports by international human rights organizations. Further reports have pointed to the scale of the camps as shown by satellite images, which hints at a capacity of up to a million detainees or more.

A lot of people rebuffed Xijin's claim and drew attention to the fact that China doesn't allow journalists to visit the camps and objectively report on what happens in them.

Situation in Xinjiang was out of control before. Over 1,000 violent attacks occurred in a year. But local government held back the media coverage at the time. As a result, outside world cannot understand the following measures. This is the price of insufficient press freedom. 1/3

There had been such a horrific story in XJ. A road was blocked by mobs from nearby villages.They stopped all the vehicles and killed all the Han people inside. It is hoped the outside world can understand the measures XJ is taking.They are taken as a last and necessary resort.2/3

The most pressing task for XJ is to stabilize the situation, preventing civilians from being killed by young Uyghur people brainwashed by extremism and the latter not being killed by police at crime scene. Vocational training centers may not be the ideal solution, but it works.3/3

Hu’s argument received no echo but a number of mockeries, particularly in respect to his claim about the 1,000 violent attacks and the mob incident. A commenter said:

believe me , if that really happened, your government will not wast any chance to show it in public and in your fake 新闻联播 [CCTV news program].

[Vocational training centres in Xinjiang has good effect.] Regarding the governance of Xinjiang, China and Western interfering forces are not on the same channel. What we want is Xinjiang’s stability and peace, and different ethnic groups could enjoy a happy life there. This is the most important human right. Western forces want to find fault with China and create chaos in Xinjiang so as to confine China’s development.

In contrast to comments on Twitter, which is blocked but accessible via VPN in China, Hu has attracted many positive responses on Weibo, where political speech is much more heavily controlled. The most popular comments under Hu’s Weibo post were:

food, drink and no chaos is the utmost respect to human rights.

In Xinjiang, stability is most important. If Xinjiang is unstable, the whole country would be unstable. If the country is unstable, China will have big problem and we will fall into the same trap that some countries did.

This year, western opinion organizations and politicians keep attacking the vocational training centers in Xinjiang. These centers are to help those who had been affected by extremism but they accused Xinjiang for violating human rights. The trainees are learning common language [Putonghua], legal knowledge and vocational skills inside the center, but Western forces condemned the measure as “religion persecution”.

Again, there are many echoes under the thread:

As someone from Xinjiang, I would like to say that if there weren't any acts of terrorism, the economy would be flying. Now, a large part of Xinjiang revenue has been allocated for the victims of attacks. We dare not bring anything out in the street for fear of inspection, door to door delivery, internet and mobile applications all have restriction thanks to the terrorists. The Westerners bare no pain. Those who support or sympathize with those [terrorists] are villains.

In most cases, when the West starts to attack a particular policy or issue, it usually implies the policy is right, on the contrary, if they praise something, we have to be careful. They don’t hope for our best but for our worse.

Of course, as is always the case within the great Chinese firewall, it is impossible to appraise real public sentiment from the social media commentariat.