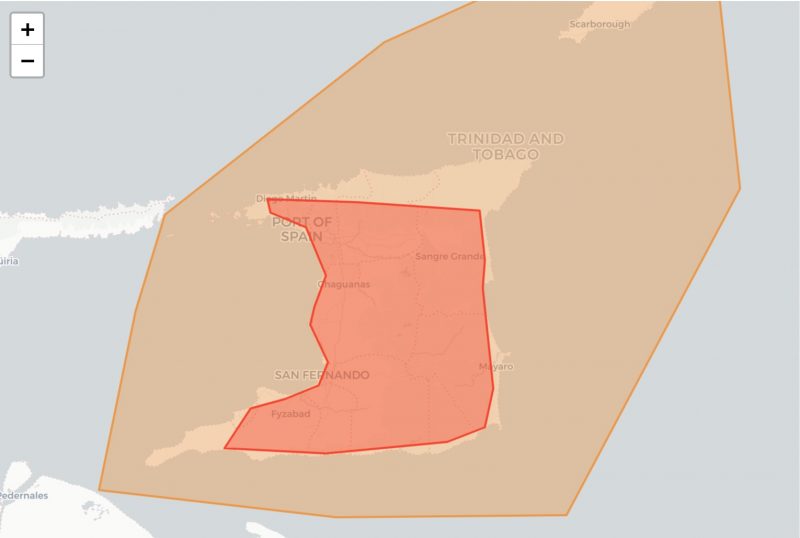 A screengrab of a public warning on the Trinidad & Tobago Meteorological Service's website, alerting citizens to the areas that have been affected by flooding and adverse weather between October 19 and 20, 2018.

The rains that enveloped Trinidad and Tobago on October 19, 2018 started gently, but their initial softness belied their ferocity. They were persistent, relentless, and they got heavier with time. Time turned out to be the thing that turned bad weather from the energetic Intertropical Convergence Zone [2] (ITCZ) into a national disaster [3]. 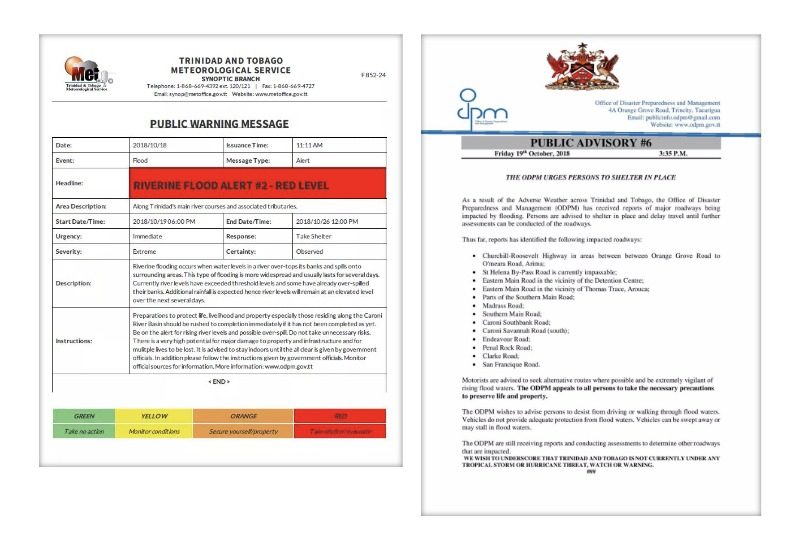 Alerts and public warnings that were sent out via social media channels by Trinidad and Tobago's Meterorological Service and its Office of Disaster Preparedness and Management, on October 19, 2018.

When the deluge began on Friday October 19, many workplaces closed early in an effort to ensure that their employees reached home safely. Still, major causeways were blocked [4] — and if people did manage to reach their homes, many would end up having to abandon them [5], the flood waters [6] were so high. One family even took refuge on their roof [7].

Many communities were reeling from the devastating effects of the flooding. By Saturday morning, October 20, Prime Minister Keith Rowley was doing walkabouts [8] in some of the worst affected areas. Via Facebook, he noted that there were, thus far, no lives lost, and that his focus was on “the conditions at the shelters [9], making sure that people housed there have cots, blankets, food and other supplies.”

Officially dubbing the situation a “national disaster” [10], Rowley assured flood victims that the government would find the resources to help. Incidentally, many of the areas that were hardest hit are not part of the ruling party's support base. When relief was slow in coming [11] through official channels, some social media users saw it as an opportunity to play politics. With one frank comment, Facebook user Omari Ashby called that out [12]. To him, this was a time for Trinbagonians to band together, regardless of political affiliation, and help those who were suffering.

Through WhatsApp and other social media channels, the country's Chambers of Commerce (just a few of the organisations that rushed to help) jointly circulated a Google form [13] encouraging people to volunteer for flood relief efforts, which included the donation of food, clothing and cleaning items.

With the continuous rainfall, large sections [14] of the main highway connecting north and south Trinidad remained impassable and many warnings were issued via WhatsApp: 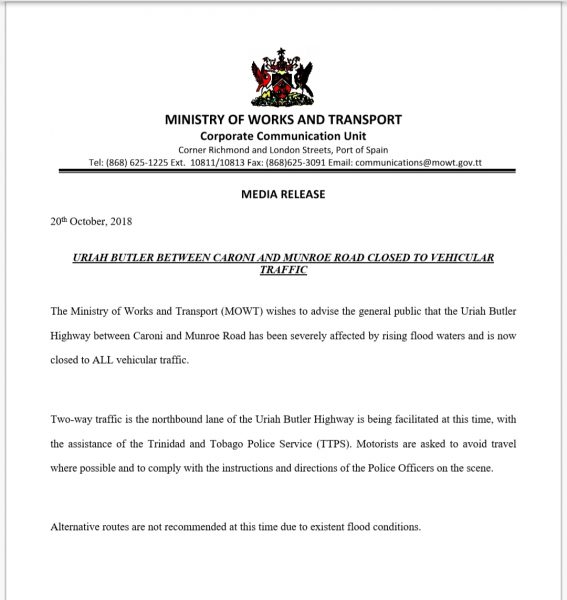 An update by Trinidad and Tobago's Ministry of Works alerting drivers to the closure of the Uriah Butler Highway due to flooding.

The nearby Caroni River [16], the country's largest, broke its banks, causing floodwaters to span the highway. Video footage, shared once more through WhatsApp, showed just how strong the currents were, and therefore how dangerous that made the situation, even as motorists attempted to get past:

St. Helena, an area close to the Piarco International Airport in Trinidad, was also affected. A video taken by a pilot coming in for a landing was soon widely circulated on WhatsApp. Although some flights were affected by the bad weather, Minister of National Security Stuart Young said that the airport itself was intact [18]:

In a press conference at 6:00 p.m. on October 20, Prime Minister Rowley told the media that the flood waters in the St. Helena area were still high — some areas could be accessed only by boat:

He heartily praised the efforts of the communities themselves, saying that volunteers did — and continue to do — yeoman's service. A team of men, for instance, rescued someone who was trapped in a car at Warren Road in the Caroni area [WhatsApp video]:

Another badly affected area was the community of Greenvale Park in La Horquetta, Arima [26] — many residents had to evacuate their homes and seek refuge in emergency shelters:

Via telephone and WhatsApp, I spoke with Lesleyanne Nanan, who lives with her family near Caroni, not far from Kelly Village [30], which suffered great damage. Her home was not flooded, but she reported that many of her neighbours were not so fortunate. On October 19, when the heavy rains began, she said, “All around my road is water. My son came to pick me up at work. Many small rivers, canals and rivulets like Cunupia burst banks. About 500 metres from me, water is crossing the road.” The next morning, she told me, “Lower down from me, water is four to six feet high. Residents are trapped. My road is cut off completely. Not even trucks can access the highway, the water is so high.”

Farmers from the area eventually started using their tractors to rescue people, but the floodwaters defied even heavy machinery; eventually, help had to come by boat. As waters continued to rise close to Nanan's house on October 20, she fortified all the entrances with sandbags and propped up her appliances on bricks. No one quite knows what to expect, since the inclement weather is expected to last [31] throughout the weekend, but they are not taking any chances.

While some netizens were quick to say [32] this was an Act of God, the reality is that parts of Trinidad and Tobago have consistently faced flooding after heavy rains, thanks in part to irresponsible development practices, widespread littering and denuding of hillsides. Ronald Ammon, president of the Trinidad and Tobago Institute of Architects [33] (TTIA) said that many developments are built without any consideration for how water drains off. This, coupled with the clear cutting of land, leads to soil erosion, and the silt ends up in the waterways, along with whatever garbage people irresponsibly dispose of. He sent me this comment via WhatsApp:

Unplanned development particularly on hills (and where land is cleared without regard for regulations) simply speeds up the rate at which surface water would typically reach main water courses and low lying areas. The unplanned increase of paved surfaces further exacerbates this by reducing the water absorption rate of the soil. The increased rate of surface runoff puts stress on existing waterways, which simply can't handle this.

Erle Rahaman-Noronha, director of the Caribbean Permaculture Research Institute [34], who lives in Central Trinidad, one of the worst affected areas, agrees. Via WhatsApp, he explained:

With climate change, we can expect periods of increased rainfall and it is our responsibility to begin designing our landscapes to slow down, hold and sink rainfall into the ground instead of letting it run off the land, causing extensive flooding. Individuals have the capacity to design and implement many of these interventions rather than wait on government to do so. The future of adaptation to climate change lies in appropriate planning and design. It also lies in the treatment of our environment as something that nourishes us, rather than a dumping ground for plastics and other non-biodegradables that clog our waterways and contaminate our fresh water supplies.