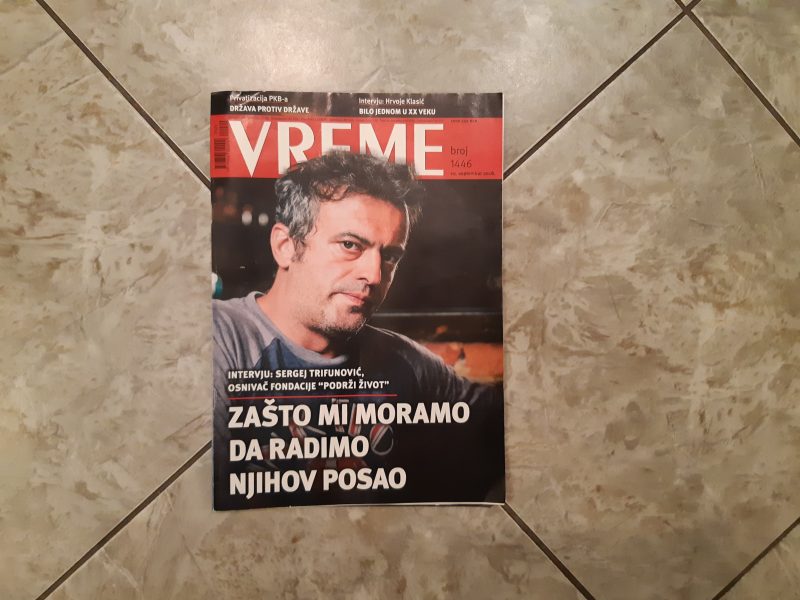 Philanthropist Sergej Trifunović on the front page of Vreme weekly from Sept. 20, 2018, featuring an interview anticipating state harassment. Headline says: “Why do we have to do their job”. Photo by GV, CC-BY.

Serbia's law enforcement authorities are investigating a health charity whose owner is openly critical of the ruling government in what some citizens say is driven by retaliation.

The probe has come on the heels of a highly-mediatized case in which the foundation, called Podrži život (“Support Life”),  helped a 4-year-old boy, Dušan Todorović, to receive cancer treatment in Spain.

The foundation's work consists of collecting donations from citizens via SMS in order to help children who need expensive medical operations that are not offered by the Serbian's public health system. In September, it helped gather 191,000 euros (approximately 225,000 USD) to pay for a boy's treatment.

After the astounding amount drew attention from the public and the media, the government sent its state-owned helicopter to the boy's small town Svilajnac to transport him to Belgrade, and then its official aeroplane to fly him to Barcelona.

Many Serbians have regarded the move as a hypocritical publicity stunt and claimed that it was used to present the Serbian President Aleksandar Vucić as a saviour of the child. The boy ended up passing away in Barcelona two weeks later.

Shortly after the boy had been transferred to Spain, the Minister of Health Zlatibor Lončar — whose ties with the Serbian mafia was recently examined by a local investigative media outlet — went on television to warn citizens against SMS-based donations. He said: “Beware of SMS actions, we can expect to reveal some filth in there”.

His declaration immediately raised concerns that the charity would be targeted. Indeed, on October 11, the founder of Support Life, Sergej Trifunović, who is also a famous actor in Serbia, tweeted that the foundation had been visited by the police.

We have a visit by the criminal police, the department for organized crime! Nice people, they personally have no say in it, they have to do their jobs…

While he had anticipated the inspection in an interview on September 20th — when he said he was confident the foundation worked in full compliance with the law — Trifunović didn't share any further details about the visit on October 11.

A similar story in Macedonia?

The methods of pressure against Serbian civil society organizations bear resemblance to those used by other populist governments in Central and Eastern Europe, in particular, neighboring Hungary and Macedonia.

Serbia is ruled by the Serbian Progressive Party (SNS), which has a far-right background, but managed to re-brand itself as a pro-EU party and, as such, became a member of the transnational European People’s Party (EPP), an association of center-right political parties. Before they lost power in Macedonia in May 2017, SNS’s “sister party” within EPP, VMRO-DPMNE, began a crackdown against prominent local civil society organizations through a series of investigations. The action engaged the financial police, the public prosecutor’s office, the ministry of interior, the public revenue service and the anti-corruption commission.

After the change of government, Macedonian law enforcement officials confessed that they’ve received orders to find anything that could be used to incriminate the organizations. While they mostly failed to find incriminating evidence, the investigations ended up draining the organizations of time and resources.

On October 17, Trifunović tweeted that Support Life foundation in Serbia was facing a similar kind of crackdown:

I just heard from “a source” that the prosecutor's office got an order to find any way possible to process my case which is supposed to end with my detention. Regardless if they find or don't find anything incriminating [in the foundation]. Let's see how the rule of law works! Work harder! In any way possible.

#5757 isn't just a humanitarian number.
It's also a symbol of resistance to tyranny.

Destruction of the foundation Support Life is not just a revenge against Sergej for the respect and trust he garnered, it's also result of fear of an unloved unfortunate against any form of cooperation which can unite us and bring out the good in us.