For Calypso History Month in Trinidad and Tobago, six tunes for the #metoo era 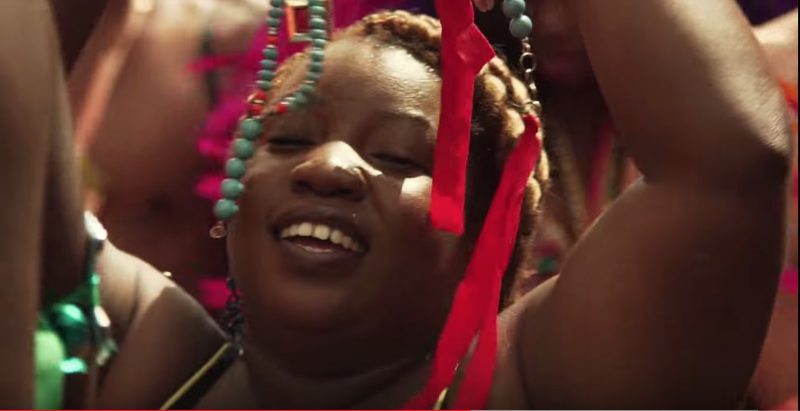 A screengrab from the YouTube video “Leave Me Alone” by Calypso Rose and Machel Montano, in which the female protagonist defies her partner's wishes and takes part in the Carnival festivities. The song became a rallying cry for activists campaigning against gender-based violence in 2017.

October 2018 is Calypso History Month, a tradition started by the Trin­ba­go Uni­fied Ca­lyp­so­ni­ans Or­gan­i­sa­tion (TUCO) in 2002 as a way to celebrate the role ca­lyp­so has played in the so­cial and po­lit­i­cal de­vel­op­ment of Trinidad and To­ba­go.

To mark the occasion, the Global Voices Caribbean team will be highlighting some of the outstanding contributions to the calypso pantheon from over the years. First up? Calypsoes whose lyrics empower women.

In a genre that has often painted women in a negative light, either likening them to she-devils or playthings, such calypsoes were once rare. According to writer and historian Kim Johnson, much of traditional calypso “posited a war between men and women and took men's side”. Which is why tunes that have broken that mould are etched forever in the national consciousness.

Here are our picks (in no particular order):

The late Aldwyn Roberts, better known as Lord Kitchener (the Grandmaster of Calypso), sang this ditty about a foreign woman visiting Trinidad at Carnival time. She asks his advice on how best to take part in the festivities, and he tells her:

Come in town J'ouvert morning, find yourself in a band
Watch de way how de natives movin’, hug up tight with a man
Sing along with de tunes dey playin’, and now and again you shouting, ‘Play mas’, bacchanal!’
Miss Tourist…dat is Carnival!

With that memorable refrain, Kitch deems Carnival a level playing field not just for locals and visitors alike, but also for men and women. Everyone is encouraged to have fun and “play themselves” in the spirit of Carnival.

With its lively, danceable '60s calypso beat, it's no wonder the song won the Carnival Road March title that year, but its message endures: Carnival is for everybody, and women can — and should — stake their claim in the bacchanal.

It's a thing of beauty when art imitates life. In this calypso by Irwin Reyes Johnson, who goes by the stage name of Scrunter, we learn about a real-life pioneer: Annie Lopez, the first ever female bass player for the legendary steel orchestra “Desperadoes”, who was brazen enough to want to play pan — then a rough and tumble, male-dominated endeavour.

Lopez paved the way for women to find their niche and hold their own as steel pan musicians, and Scrunter's calypso catapulted her story into the national consciousness. Now, thanks to Scrunter's unforgettably groovy bass line and Lopez's bold determination, it's quite commonplace to see a “woman on de bass” — or any pan, for that matter.

The repertoire of Sandra De Vignes (aka Singing Sandra), is reputed for its social commentary. Her tunes do not shy away from tough topics like race or economic inequity, and they are always delivered from a strong feminist perspective. In this calypso, she was way ahead of the #MeToo movement when she addressed the issue of sexual harassment:

You want to help to mind your family, you want to help your man financially
But nowadays it really very hard to get a job as a girl in Trinidad
You looking out to find something to do, you meet a boss man who promise to help you
But when the man let down the condition, nothing else but humiliation […]
Well if is all this humiliation to get a job these days as a woman
Brother they could keep their money, I go keep my honey, and die with my dignity!

The song, which boasts a melodiousness that belies the gravity of its lyrical message, invites women (and progressive men) to sing along, and more importantly, live by those words.

Denyse Plummer is a performer who paid her dues trying to forge a path in the calypso arena — not only as a woman, but a woman perceived as white in the Trinidadian context. Her perseverance eventually paid off. Thanks in part to a successful partnership with revered pannist Len “Boogsie” Sharpe, who often enlisted her to perform his compositions, Plummer enjoyed a prolific career, which included several Calypso Queen competition titles.

This song could well be interpreted as her rebuff to all the criticism she faced, and a rallying call for Caribbean women who routinely felt undervalued, in the calypso music genre and beyond:

Since de beginning of time we standing in line, taking we grind, following behind
Now we woman have changed we course, without remorse woman is boss.

What exactly is a flag woman? She's the compelling creature that acts as the “front woman” for steel orchestras during Trindad and Tobago's annual Panorama music competition by waving a flag.

The flag, mind you, is not some flimsy piece of fabric, and the waving is not the typical side-to-side motion you'd expect. This is a flag with a message: it usually bears the name of the band on stage, and may even include the title of the song they're performing. The waving? Well, it's really more like gymnastics. While the players mesmerise the audience with their musical skill, the flag woman captivates them with her movement. She is part cheerleader, part dancer, all woman, shimmying sensually to the rhythm.

What made Kitchener the genius that he was is that rather than objectifying women — like the lion's share of calypsoes tend to do — he acquiesces to their sexuality, acknowledges and openly admires their power. The dualities of virgin and whore disappear; if there were an anthem for women feeling in control of their sexuality, Kitch's “Flag Woman” is it:

This “kaiso” collaboration (a blend of traditional calypso and its energetic soca hybrid) between grand dame Calypso Rose and soca king Machel Montano is a nod to the best of calypso's legacy even as it calls the modern-day woman to arms.

When the song was first released in 2017, Calypso Rose allowed it to be used in a campaign to bring awareness to the issue of gender-based violence in Trinidad and Tobago, many instances of which would happen around Carnival time. Through the #leavemealone and #leaveshealone hashtags, women shared their stories and encouraged to hold themselves and their peers accountable. That's the power of empowering calypso.