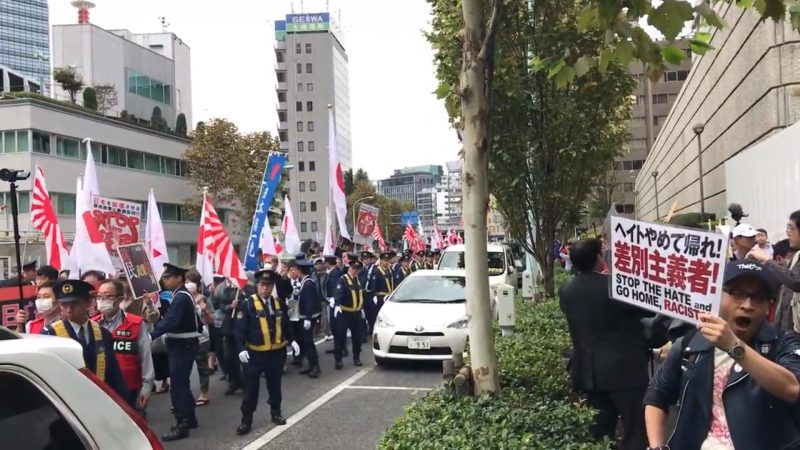 Anti-racism groups staged mass demonstrations in cities across Japan on Sunday, October 14 to counteract a series of marches by an openly racist far-right group opposed to immigration in Japan, even as Japan's government pledges to recruit 500,000 foreign workers [2] to help deal with a perceived labor shortage.

Relatively new fringe political party Japan First [3] organized the demonstrations all across Japan on October 14, including in Tokyo, Yokohama and Kawasaki, and in regional cities such as Fukushima and Fukuoka.

Anti-racism groups, in turn, decided to take to the streets too to neutralize them, in many cases appearing to outnumber [4] the far-right marchers.

In and around Ginza in Tokyo, Japan First held a demonstration promoting discrimination. As they chanted “Foreigners get out of Japan!” and so on, there were a lot of people who held placards and signs with the words “Ginza will not tolerate discrimination” and similar messages. (Hashtag) “Zero Tolerance for October 14 Ginza Hate March [5].”

Japan First Party [3] (日本第一党, Nippon Daiichi To) is a political party based in Tokyo and led by Makoto Sakurai, who has long been notorious as a leader of the netto-uyoku [8] (ネット右翼), Japan's online far-right hate movement.

For more than a decade, Sakurai has also led the Zaitokukai [9], a hate group dedicated to harassing ethnic Koreans and other minorities in Japan. Online and real-world harassment against minorities is so prevalent in some Japanese municipalities that various local governments have attempted to set up and enforce hate speech ordinances. [10]

After Sakurai received two percent [11] of the popular vote in Tokyo's gubernatorial election in 2016, as well as considerable mainstream media coverage, he officially established the Japan First Party, the main force behind the racist marches this Sunday.

Anti-immigrant demonstrators march through Ginza.
About 100 participants in the demonstration.
But the police officers were about 1000, they guard them.#1014銀座ヘイトデモを許すな [5]#NoPasaran1014 [13]#Ginza [14] #Nationalist [15] pic.twitter.com/3Wvab3lgwO [16]

In the lead up to the racist marches on Sunday, October 14, counter-demonstrators shared common hashtags, differentiated by city name, to arrange meetup points and coordinate activities. One of the most active such hashtags was “#1014横浜ヘイト街宣を許すな [18]“, or “Zero Tolerance for October 14 Yokohama Hate March.”

Counter-demonstrators converged in Tsurumi, a city ward in Yokohama, to show their support of immigrants, and to shout down the far-right marchers [19], who, like in Tokyo and other cities, were relatively few in number.

The demonstrations received national news coverage [20], with reports that the anti-immigration marchers received a strong and vocal response from anti-racism campaigners in cities across Japan.

An anti-immigration rally in Kumamoto could only round up seven guys. Very happy to see a larger counter protest. #lifeinjapan [21] #antiracist [22] #japan [23] #humanrights [24] pic.twitter.com/Gm0pxRYbVD [25]

While the number of anti-immigrant protesters may have seemed small, they still were held in tight coordination across the country, and some commentators warned Japan's far-right is not particularly weak.

…The Tokyo gubernatorial election results show that Sakurai isn't as marginal as you think. These counterprotest movement have succeeded in motivating authorities in many cities to pass hate speech ordinances and the police to monitor the hate groups.