‘Gabbie’ chatbot helps victims of sexual harassment in the Philippines 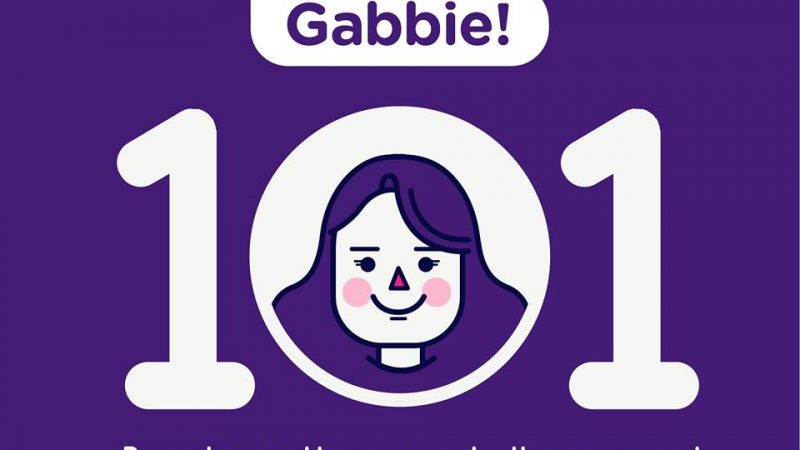 Meet Gabbie, a Facebook messenger chatbot that helps Filipinos report incidents of sexual assault and harassment. Gabbie is a project of Gabriela, a Philippines-based women's group.

Over 10,000 women from age 15 to 49 have experienced various forms of physical and sexual abuse in the year 2012. Police recorded over 23,000 cases of women sustaining physical injuries and 1,897 cases of rape in the same period. All data is from a 2013 survey conducted by the Philippine Statistics Authority.

Through Gabbie, Gabriela hopes to educate victims and encourage them to report the violence they suffered to authorities.

Here's how Gabbie works: when a person sends a message to Gabbie, he or she will be asked if he or she was a victim of assault or harassment or simply wants to know more about sexual violence. Gabbie is coded with information about Philippines’ laws about violence against women.

If the user wants to file a complaint against his or her harasser, Gabbie will ask several questions about the incident and the answers will be compiled into a form that the user can download and submit to lawyers, human resource departments or government agencies. There is also an option to forward the complaint to Gabriela.

Facebook user Lovely Ramos tested the tool and found it to be educational and convenient to use. Below are some screenshots she took when she sent a message to Gabbie. 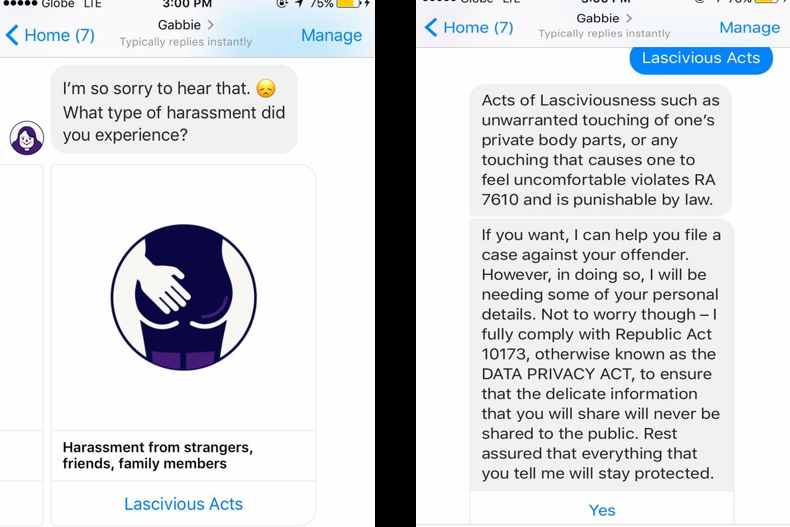 After a user identified what type of harassment he or she encountered, Gabbie will provide basic information, including related laws about it. Screenshots from Facebook page of Lovely Ramos

In my email conversation with Joms Salvador of Gabriela, she described how Gabbie is helping them in their campaign to provide services to sexual harassment victims:

Gabbie provided an additional platform for victims of sexual harassment to reach out to GABRIELA and for us to respond to specific situations where for example….Facebook is more accessible or convenient to them compared to phone or face-to-face counseling. Gabbie also served to complement our direct services to a growing number of victims even as we are faced with limited institutional staffing and volunteers.

Salvador added that Gabbie is also intended to reach out to students and other young Internet users:

Gabbie is almost a year old but she still has a lot of potential in further expanding our services to victims of sexual harassment and in educating the public about women’s rights. We are hopeful that through Gabbie, we can reach out more to young women, who are statistically the segment of the female population more vulnerable to sexual harassment, and who are more exposed to digital media.

Since its launch in November 2017, Gabbie has been featured in several news reports and has been promoted in schools, town halls, and train stations.

Gabriela also intends to make Gabbie more multilingual — as of now, it can only converse in English. Gabriela also plans to promote Gabbie among overseas Filipino workers:

If we could improve on Gabbie’s program, she also has the potential further reach out to a growing number of overseas Filipino workers who may also be experiencing sexual harassment and are searching for information.

There are an estimated 12 million Filipinos living and working outside the Philippines.

Although this tool clearly makes information about sexual harassment and assault easier for Filipinos to find online, it also raises concerns about privacy and safety. Gabbie was designed to comply with the country’s Data Privacy Act and makes every effort to protect all the information provided by its users. But the protection of Gabbie users’ data still depends on the digital infrastructure of the Facebook Messenger app, and Facebook's overall data storage and management practices.

Facebook has been accused on multiple occasions of compromising the data of its users. As recently as late September 2018, the company disclosed that at least 50 million accounts were left vulnerable to a technical bug that allowed attackers to access all of a user's information, potentially including private chats like the ones that Gabbie offers. In April 2018, the personal information of at least 1.8 million Filipinos may have been compromised as part of the Cambridge Analytica data abuse scandal. In fact, the Philippines’ National Privacy Commission wrote a letter to Facebook shortly thereafter, demanding transparency and cooperation in probing the unauthorized sharing of the personal data of Filipino Facebook users.

Nevertheless, Facebook remains the most popular messaging app in the Philippines, making Gabbie an effective if imperfect approach to spreading knowledge about how to contend with sexual harassment and assault. As Gabbie turns one year old next month, Gabriela should also seek stronger and more secure ways on how best to protect the privacy of its users while maximizing its popularity and reach.