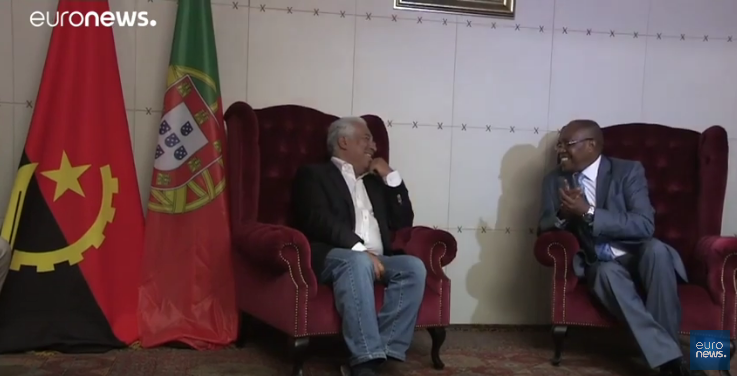 The casual attire donned by Portuguese Prime Minister António Costa during an official visit to Angola has lead to an online debate about decorum, and the potential message his clothing choice might mean as the two countries deal with existing tensions.

On 17 September, Portugal’s Prime Minister António Costa arrived in Luanda and met with Angolan Minister for Foreign Affairs Manuel Augusto. As photos began to circulate of the pair, the contrast between the two men became more apparent. While Costa chose to wear jeans and casual shoes, Augusto can be seen wearing a formal suit and tie.

Although Costa appeared wearing a suit during a later meeting with Angolan President João Lourenço, many people could not help but question Prime Minister Costa's original choice of casual attire and compare it to his formal dress during a state visit to Mozambique earlier this year.

Angola and Portugal: Two countries estranged by the courts

António Costa traveled to Angola following months of diplomatic tensions between the two governments, so the visit logically drew the attention of many Angolans and Portuguese alike.

Angolan-Portuguese relations reached a low point as the result of a court case involving Angola’s former vice president, Manuel Vicente, who was accused of having bribed the Portuguese prosecutor with 750,000 euros in order to shelve two inquiries into alleged corruption cases. One of these is the Portmill case, related to the acquisition of a luxury property in the Portuguese town of Estoril.

The case, known as “Fizz”, was originally brought to court by Portugal but moved to Luanda after insistent requests by the Angolan government. The case’s transferral to Angola met various criticisms, such as that of Eurodeputy Ana Gomes who thought the move to be a “tremendous abdication” of Portugal’s justice system, employing hypocritical arguments.

Wearing jeans on an official, long-awaited visit, what is the message that Portugal is sending to Angola?

Adding to this, Ilídio Manuel, a journalist and a theatre professional, questioned if Costa would have dressed the same way on an official visit to another country:

The Portuguese prime minister, António Costa, came to Luanda for an OFFICIAL visit dressed informally (jeans and no tie). Would he have dressed the same if he visited Germany, USA, Japan, or another first world country? If it was the other way round, an Angolan leader who visited Portugal dressed in the same way?

When faced with the wave of comments and opinions coming from Luanda, Maria Antónia Palla, the Portuguese prime minister’s mother, came out in defense of her son:

My son, António Costa, is polite. In Angola there is too much protocol and too little of important things – democracy

However, amidst the back and forth about etiquette and respect, Assistant Professor Constatino Marengula pointed, instead, to the impracticality of wearing a suit:

There are people annoyed because António Costa came to Angola without a suit or tie. I never understood these standards of beauty, responsibility and professionalism defined by the packaging, represented by suits and ties, in a tropical area, with heat and humidity. When I saw this, it reminded me of a job interview, in a certain very large bank in the 1990s. Even in the heat, the men asked me if I had any problem with wearing suits and ties…! So I said no and gave my reasons! I don’t know if it was because of this, but I was not the lucky candidate! After seeing many suited crooks, I am still curious to know what you look for in suits and ties, with the heat and humidity!