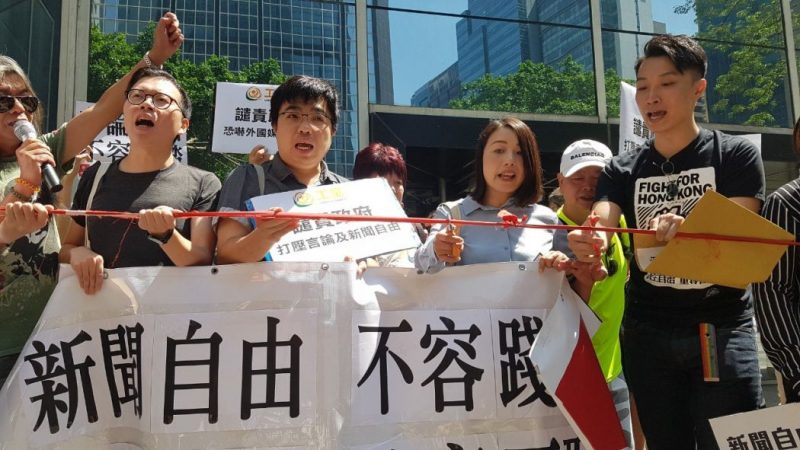 The Civil Human Rights Front led a protest against visa denial decision at the Immigration Tower in Wan Chai on October 6. Photo taken by Tom Grundy from HKFP.

This post is a roundup of reports published between 5-6 October 2018 on Hong Kong Free Press (HKFP). The republication is based on a partnership agreement.

This is the first time we have encountered this situation in Hong Kong, and we have not been given a reason for the rejection.

Hong Kong is a special administrative region of China with more economic and personal freedoms than the mainland, a set-up known as “One Country, Two Systems.” In recent years, Beijing has pressured Hong Kong to pass new laws that strengthen the “One Country” part of the principle.

Mallet chaired a talk by pro-independence activist Andy Chan at the FCC in August, which the office of China’s Ministry of Foreign Affairs in Hong Kong had tried to block.

Former chief executive Leung Chun-ying compared the event to giving terrorists a platform. He slammed the FCC for crossing a so-called “red line” and said that many would want the club to explain why the government should not allow others to bid for its premises in Central.

The event came after the police suggested banning the Hong Kong National Party which was eventually banned late last month by the government.

The FCC added that it is deeply concerned about the government’s decision. It called upon the authorities to rescind their decision saying it lacked any reasonable explanation. It said in a statement:

The FCC is expecting a full explanation from the Hong Kong authorities for this extraordinary move, which is extremely rare, if not unprecedented.

New York Times’ spokeswoman Eileen Murphy pointed out that any politicization of the territory’s visa process “would be very worrying.”

We’re troubled that the government in Hong Kong may be preparing to expel a respected colleague at The Financial Times whose application for a routine visa renewal has been rejected without explanation, and we are seeking clarification from the authorities…Hong Kong’s commitment to freedom of speech and rule of law has long attracted international businesses and news organizations to the city, including The New York Times.

A UK Foreign and Commonwealth Office spokesperson said it was “concerned” by the rejection of Mallet’s visa renewal:

We have asked the Hong Kong Government for an urgent explanation. Hong Kong’s high degree of autonomy and its press freedoms are central to its way of life, and must be fully respected.

The rejection of a renewal of a work visa for Financial Times correspondent and Foreign Correspondent’s Club Vice President Victor Mallet is deeply troubling…This decision is especially disturbing because it mirrors problems faced by international journalists in the Mainland and appears inconsistent with the principles enshrined in the Basic Law.

A number of international and local NGOs have spoken out against the government decision. On Saturday, October 6, NGO coalition Hong Kong Civic Human Rights Front protested outside the Immigration Department against the visa decision.

The Hong Kong authorities’ visa renewal rejection—without explanation—of a journalist who’s done nothing more than his job smacks of Beijing-style persecution of critics… it indicates a quickening downward spiral for human rights in Hong Kong: that the Hong Kong government is now following Beijing’s leads in acting aggressively towards those whose views the authorities dislike.

The Hong Kong Journalists Association said it was shocked and angered by the incident: “It makes people wonder whether it was retaliation.” It added that the visa rejection will severely harm Hong Kong’s status as a global city:

This is clearly a form of retaliation for his involvement in the public talk organized in August by FCCHK, which angered Beijing by featuring a pro-Hong Kong independence activist. Such action is yet another proof that the Chinese authorities are extending their policy of intimidating foreign journalists to the territory of Hong Kong.

Representatives from the Hong Kong UPR Coalition – consisting of 45 NGOs – will travel to Geneva next week to speak at the upcoming United Nations Universal Periodic Review pre-session, and discuss the incident with representatives from other member states. Demosisto, a member of the Coalition said in a statement:

The Beijing authorities need to respond now more than ever to its decision to suppress press freedom in Hong Kong, as its state of human rights is being evaluated on by other Member States in the upcoming session, as is its duty as a member of the United Nations.