Despite proven flaws, India's biometric ID scheme was upheld by the Supreme Court. Now what? 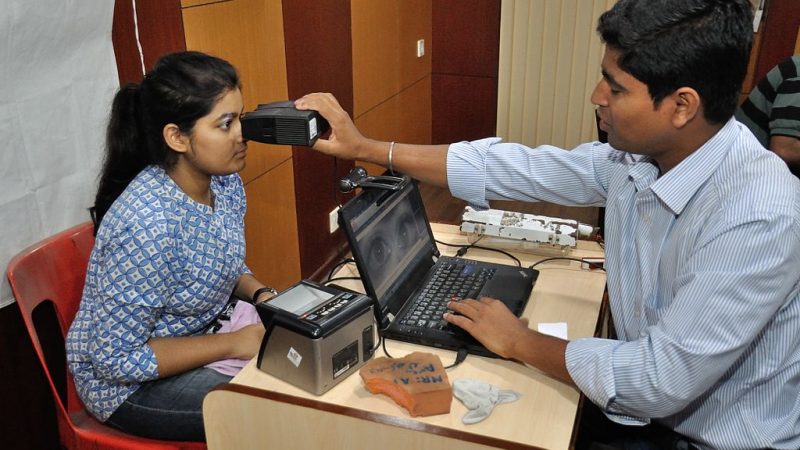 A biometric data collection camp of the ‘Aadhaar’ project, in Salt Lake, Kolkata, India. 2015. Image by Biswarup Ganguly via Wikimedia Commons. CC BY 3.0

On Wednesday, 26 September, the Supreme Court of India upheld the controversial Unique Identity scheme or Aadhaar.

Following the second-longest hearing in the history of the Indian judiciary, the five-judge bench delivered a 1,448 page judgment more than seven years after the first legal challenge was issued against the scheme.

First read of the majority #AadharVerdict is scary. The end of mandatory linking to bank accounts & mobile phones, sure. But no remedy for possible wilful exclusions from welfare. Worse, the "surveillance state" issue is only addressed by saying "make a stronger law against it".

The system was also cited in an earlier constitutional challenge on privacy grounds. In July 2017, a nine-judge constitution bench of the Supreme Court unanimously upheld the right to privacy of Indian citizens, but the ruling did not implicate Aadhaar.

First launched in 2009, the Aadhaar system gives each person a unique ID number associated with multiple pieces of that person’s demographic and biometric information and stores it in a centralized database. In theory, it helps people authenticate their identity so that they may access a host of social and federal services.

But the program has suffered from data mismanagement and machine errors, resulting in people being denied state-guaranteed welfare benefits, the leaking of citizens’ data and accusations of enabling surveillance.

Another shocking example of Aadhaar's failures came in 2017, with the starvation death of an 11-year-old girl who was denied her legally entitled food subsidies for the lack of the Aadhaar number. The case revealed that numerous ration shops were denying citizens their food subsidies, in an attempt to comply with the Aadhaar system.

Aadhaar has led to large scale exclusion of the poorest and most marginalised from state welfare programs. 11 yr old Santoshi died of starvation in Jharkhand exactly one year ago when her ration was stopped because her ration card was not linked to #Aadhaar. 4/4 #BhookhKiBaat pic.twitter.com/CiXuUXnLjc

In the ruling, the Supreme Court upheld sections of the Aadhaar Act of 2016 that allow biometric authentication to be used for government subsidies and welfare schemes. But the judgment removes some of the previously implicit requirements of the system, stating that “no one can be denied benefits for want of an Aadhaar card.”

The court also ruled to limit the use of Aadhaar by private banks and telecom providers, but did not retroactively punish private companies for violating the Act, including collecting citizen's data in the absence of legislation between 2009 and 2016.

While the judgment has been debated upon by experts, political groups and citizens alike regarding the individual privacy and linkages to financial inclusion, there exists a confusion about the verdict.

The Supreme Court had held that allowing the private sector to access biometric and demographic information was tantamount to enabling their commercial exploitation of this information. So, the court ruled, that portion of Section 57 that enables bodies corporate and individuals to seek authentication, was unconstitutional. There is considerable confusion as to what this statement really means. Does it imply that no private entities whatsoever can use the authentication infrastructure? If so, how does that interpretation square with the rest of the judgment that unequivocally upholds the use of Aadhaar for the purposes of dispensing subsidies and other government benefits?

A report in Business Standard highlights how companies such as India's Reliance Jio acquired customers due to the e-KYC module aided by Aadhaar and the future recourse:

“Though the verdict is not affecting us, we believe that this will be a regressive move for FinTech companies as they will eventually move to the traditional mode of verifying individuals and thereby the turnaround time for processing the loan will increase to a considerable extent,” said Bhavin Patel, co-founder and CEO of LenDenClub, a peer-to-peer lender.

An editorial in The Hindu explains how the recent judgment restores the Aadhaar bill to its original form, by eliminating loopholes in the public distribution system for society's poorest segments:

In upholding the constitutional validity of Aadhaar and clarifying areas in which it cannot be made mandatory, the Supreme Court has restored the original intent of the programme: to plug leakages in subsidy schemes and to have better targeting of welfare benefits. Over the years, Aadhaar came to mean much more than this in the lives of ordinary people, acquiring the shape of a basic identity document that was required to access more and more services, such as birth and death certificates, SIM cards, school admissions, property registrations and vehicle purchases.

#AadhaarVerdict: The Good, the Bad and the Ugly

Over the next few years, many legal scholars and social scientists are likely to pore over this significant judgment for its far-reaching impact on civil liberties and socio-economic issues.

The majority judgment struck down sections of the legislation that allowed the use of Aadhaar by private companies and also curtailed its use by the state under arbitrary “national security exceptions”. However, in spite of agreeing that profiling undermines civil liberties and surveillance is unconstitutional, the judges reach the conclusion that neither is possible in the Aadhaar system.

Aadhaar was always meant to be a mechanism by which subsidies and other welfare services of the government could be transferred to the people more easily. It was not intended to be a socio-economic right in itself. However, judicial approval for the scheme cripples individual privacy for perceived common good. In spite of acknowledging its flaws, the judges don't find the reasons adequate to declare the scheme unconstitutional.

While four out of the five judges upheld the constitutionality of the Aadhaar project, Justice Chandrachud's lone dissent raised important concerns.

He argued that the scheme is a “fraud on the constitution” and “wholly illegal”:

Identity is necessarily a plural concept. The Constitution also recognises a multitude of identities through the plethora of rights that it safeguards….Technology deployed in the Aadhaar scheme reduces different constitutional identities into a single identity of a 12-digit number and infringes the right of an individual to identify herself/himself through a chosen means.

While the dissenting judge's voice is not law, it opens the possibility of future challenges to the judgment.