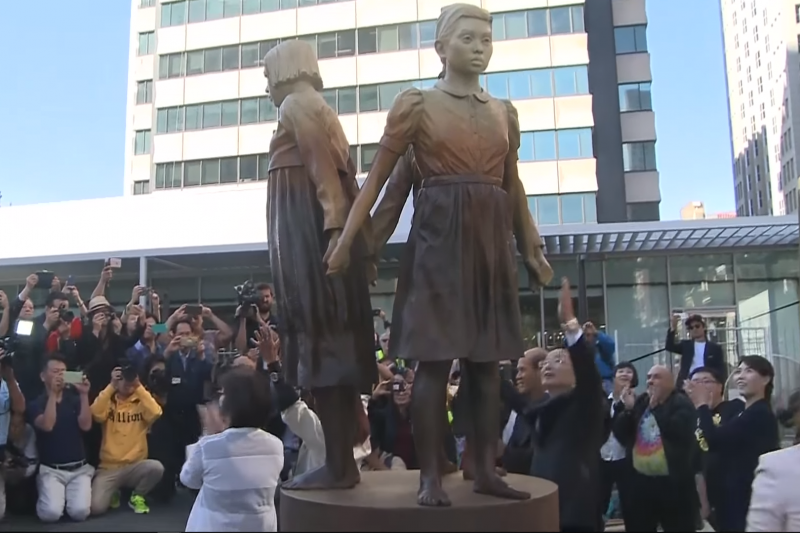 The city of Osaka officially ended its sister city relationship with San Francisco in the United States after the latter permitted a monument memorializing “comfort women” to remain on a city-owned property.

The monument was commissioned by the “Comfort Women” Justice Coalition, a civil society group dedicated to raising awareness about women who had been conscripted from across Asia and enslaved by the Japanese forces during the World War II. It features four statues representing Korean, Chinese and Filipina women, as well as a deceased woman bearing witness from beyond the grave to their experience.

The statue provoked strong reactions in Japan when it was first unveiled in September 2017, and municipal, prefectural and central governments raised official protests against San Francisco a month later when, as part of an unrelated transaction, the American city bought the property. The mayor of Osaka Yoshimura Hirofumi then threatened to sever sister city ties if the monument was not removed from the property, or if the captions were not amended.

He finally carried out that threat on October 2, 2018, circulating in the process a 10-page, 3,800-word letter in English addressed to San Francisco mayor London Breed, listing — often in bolded, underlined text — a litany of reasons for the breakup.

He complains, for example, that inscriptions on the monument presented “uncertain and one-sided claims as historical facts”, and says that there are disagreements among historians about the total number of “comfort women” conscripted and the degree to which the former Japanese Army was involved.

While Yoshimura acknowledged the regrettable treatment of women in war, he argued Japan was being unfairly “singled out”:

[…] This issue should not be treated as an issue specific solely to the Japanese military. As long as widespread sexual problems on the battlefields by countries other than Japan are not openly recognized, past offenses, which the whole world must face, will go uncorrected, and those violations in other parts of the world will not be resolved.

While she did not respond directly to the letter, San Francisco mayor London Breed issued a statement about Osaka's decision to sever ties, saying:

One Mayor cannot unilaterally end a relationship that exists between the people of our two cities, especially one that has existed for over sixty years. In our eyes, the Sister City relationship between San Francisco and Osaka continues today through the connection of our people, and San Francisco looks forward to strengthening the bonds that tie our two great cities together.

“Japan is yet to sincerely apologize” 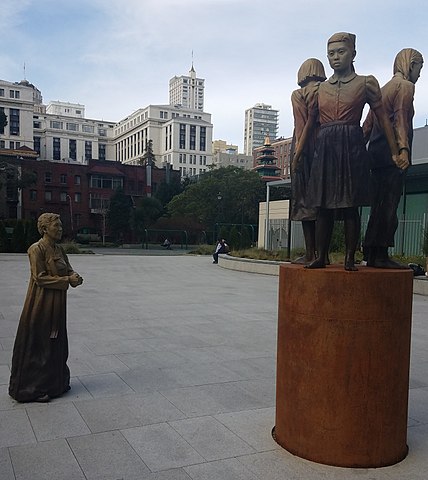 Women conscripted and enslaved by the Japanese military were euphemistically called ianfu (comfort women) in Japanese, and have long been a source of political controversy.

In World War II, at least 200,000 women from more than ten countries across Asia were forced into sexual slavery by the Imperial Japanese Army (the United States, during its occupation of Japan from 1944 to 1952, operated a similar network of brothels).

Osaka itself is home to a large number of ethnic Korean residents, and Yoshimura‘s predecessor, the populist nationalist Hashimoto Toru, was known for sparking a variety of controversies, including stating in 2013 that comfort women were a “military necessity” during World War II. Yoshimura, a 41-year-old former lawyer, has in turn also been involved in the populist political movement at the local and national level since 2011.

An agreement between the governments of Japan and South Korea in late 2015 was intended to “finally and irreversibly” resolve the issue of “comfort women”, but ended up provoking widespread protests in South Korea.

Then, Park Geun-hye, the South Korean president who signed the agreement, was impeached, forced to resign and eventually imprisoned on unrelated corruption charges. Park's successor, President Moon Jae-in, has stated that Japan has yet to sincerely apologize and acknowledge that “comfort women” were systemically enslaved and exploited during the war.

The monument in San Francisco is not alone in provoking controversy. Activists unsuccessfully fought a three-year battle to remove a similar memorial erected in Glendale, California, and a statue in Manila was removed supposedly to make way for infrastructure improvements, although the removal came after official protests by the Japanese government. The Japanese government has also protested a “statue of peace” that was erected across the street from the Japanese embassy in Seoul, South Korea.

This article incorporates some research by Eric Johnston.