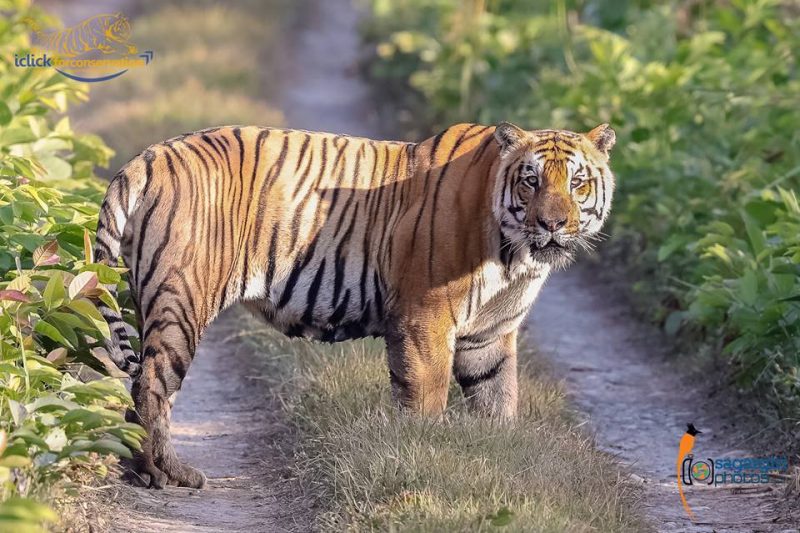 Conservationists are upbeat about Nepal slated to become the first country to double its wild tiger numbers [1] by 2022. On National Conservation Day, September 23, 2018, Nepal announced that it has 235 tigers living in the wild. In 2009, there were only 121 tigers in Nepal.

Nepal's latest tiger census is now out, and – DRUMROLL – number of Bengal Tigers in #Nepal [2] has increased to 235 – a remarkable 94% increase since 2009! We are proud to have helped protect these endangered cats. It’s good for conservation & for tourism. ?https://t.co/N1S9Ypj33D [3] pic.twitter.com/eyNxlYyxzu [4]

In 2010, at the Tiger Summit in St. Petersburg, Russia, the Government of Nepal along with the governments of India, Russia, Nepal, and Bhutan pledged to double the number of tigers [6] by 2022.

Tigers, revered in Hindu mythology as the mount of Durga [7], Goddess of Power, have always been a guarded species. As symbols of power and courage, tigers have faced threats  [8]due to a declining prey population, poaching, and destruction and degradation of their habitats.

Once, nine tiger species [8] (Bengal, Siberian, Indo-Chinese, South Chinese, Sumatran, Malayan, Caspian, Javan, and Bali) roamed in 13 countries, ranging from Turkey to several nations in Southeast Asia. Out of these, the Caspian, Javan and Bali tigers are already extinct. Nepal is known for its Bengal tigers.

Tigers are difficult to track [13] because of their elusive nature. According to noted tiger expert Dr. K. Ullas Karanth, in the 1960s, officials in India, Nepal, Bangladesh, and Russia assumed that just as human fingerprints are unique, paws of a tiger must differ. They thought they could count tigers by counting their tracks, [14] but the method was flawed.

With technological advancements, tigers these days are counted by their unique stripe pattern on their flanks, automatically captured by camera traps placed along tiger trails. The following video reveals how tigers were counted in Nepal, where over 300 field workers spent 16,811 days with 1,643 camera traps and then analyzed tigers’ stripes based on the footage:

However, back in 2016, Dr. Karanth expressed skepticism about the counting method in his article “The Trouble with Tiger Numbers [14]“:

These groups (the WWF and the Global Tiger Forum) aim to increase the number of tigers to 6,000 by 2022. But their tally, based on official estimates, relied on flawed methodologies, including the use of statistically weak extrapolations from tiger photographs and field counts of spoor.

The Government of Nepal, together with conservation partners, has initiated several measures to save these magnificent species. According to the paper “Tiger Conservation Initiatives in Nepal” [15], Nepal has established the National Tiger Conservation Committee and the South Asia Wildlife Enforcement Network.

Nepal has also signed a memorandum of understanding with China for biodiversity conservation focused on curbing illicit wildlife trade, including tiger parts. Nepal’s declaration of Banke National Park as a protected area has also provided larger territory for the tigers. Estimating the abundance of tigers and its prey base (the availability of food in any given habitat to support a predator) will help assess the effectiveness of conservation interventions and formulate plans for future management.

Additional measures have been crucial [16] for increasing tiger numbers such as training park and protection staff to use real-time SMART [17] (Spatial Monitoring and Reporting Tool) technologies and the formation of community-based anti-poaching operations to enhance patrolling.

For now, Nepali tiger experts are optimistic about Nepal doubling its tiger numbers by 2022. It just needs 15 more tigers to reach its goal in the next four years!

Tiger experts have said that Nepal is on the track to reach its target of increasing the tiger numbers to 250 in four years.